Why Bayley Was Upset At WWE The Night Of Evolution

Can you blame her? We are just over five years removed from the start of the Women’s Revolution, which has seen the WWE women’s division come an amazingly long way in just a few years. Women’s matches have headlined several major pay per view events and there are very few hurdles left to clear. One of the biggest was having their own pay per view, but not everyone was exactly thrilled that night.

While she was the last of the Four Horsewomen to be called up to the main roster, Bayley has been one of the most successful. Her two SmackDown Women’s Title reigns have lasted nearly a year combined (save for Charlotte holding the title for less than a week) and she has become one of the more consistent performers on the show. Bayley was a part of the first ever women’s pay per view, but her memories are not entirely fond.

Bayley was interviewed by CBS Sports earlier this week to discuss the five year anniversary of the Women’s Revolution. During the interview, Bayley was asked about the all women’s pay per view, Evolution, held October 28, 2018. That same night, WWE was holding a separate live event in Ashville, North Carolina. Bayley mentioned not being happy about having two events on the same night, as she felt all eyes should be on the women’s division that night. She eventually realized that it was a regular situation during pay per views and had nothing bad to say about Evolution itself.

There is a reason she has such good memories. Check out why the show was so great:

Opinion: I can’t say I blame Bayley for being annoyed at something like this. The event really was a one of a kind show and something that had been built up for a long time. It would have been annoying to think that there were other WWE fans elsewhere instead of watching the show, but those who saw Evolution caught not only an historic event, but a pretty good one at that.

What did you think of Evolution? Will there be another one? Let us know in the comments below. 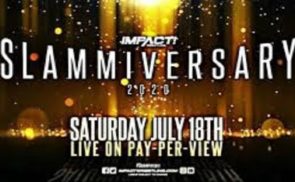