That’s one way to go. Last week on Monday Night Raw, Commissioner Stephanie McMahon sent General Manager Kurt Angle on a “vacation” and named Constable Baron Corbin as the new General Manager. The story set up a few stories, including when Angle would be coming back to television and what would be next for Corbin. As it turns out, we might know the answer to both.

According to PWInsider Elite by way of Cagesideseats.com, Angle may be back on television soon, possibly even to face Corbin in a match as soon as next month’s Hell In A Cell pay per view. Angle has wrestled a handful of matches since his return to the promotion last year, with his most recent match taking place at the April 27 Greatest Royal Rumble. He has been rumored to be training for an in-ring return. Corbin has been feuding with Finn Balor for the past two months.

Opinion: I mean…it makes sense but I’m not sure if that’s the kind of thing that needs to be done. Angle is hardly a young guy anymore and there’s a very strong chance that he could hurt himself again. It also doesn’t help that Corbin really hasn’t been the best in the ring as of late, which could make the whole thing into one big mess. There’s a chance that it could work of course, but I wouldn’t bet on it.

Are you interested in this match? If it happens, who should win? Let us know in the comments below. 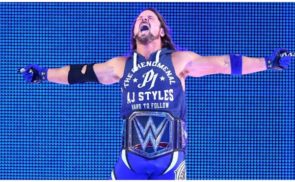