It didn’t go well. Sometimes in wrestling, you will see a big name come into a promotion with a lot of fanfare and then nothing comes of it. That can be the case with a variety of names and the results may not work for one reason or another. It can happen with wrestlers or celebrities and that was the case with one of the more high profile names to come into WWE in recent years.

Back in March, Rob Gronkowski was announced as the official host for WrestleMania 36. This was a cool idea when you could imagine Gronkowski firing up the big crowd and doing a bunch of stunts. Then it became clear that there would not be any fans in attendance at the show, meaning Gronkowski’s role would be a little more limited. About ten weeks later, Gronkowski is already gone and it turns out he wasn’t all that popular backstage.

According to Fightful Select by way of Wrestlingnews.co, Gronkowski had backstage heat related to the dive that he took at WrestleMania 36. Gronkowski was hesitant to perform the stunt, to the point where Vince McMahon himself demonstrated it. The delay put the show two hours behind schedule and a top name in WWE called Gronkowski “a f****** clown we are better off without.”

There aren’t many to pick from. Check out some of Gronkowski’s time in WWE:

Opinion: So that happened. I get the idea of having Gronkowski come in and doing something with WWE but at the same time, it wasn’t exactly a big time success. Gronkowski wasn’t around for more than an extended 24/7 Title reign and there wasn’t exactly a ton of success. At least it wasn’t a disaster, but that much drama over a dive didn’t bode well for him and it was all downhill from there.

What did you think of Gronkowski’s time in WWE? Who is your favorite wrestling celebrity? Let us know in the comments below. 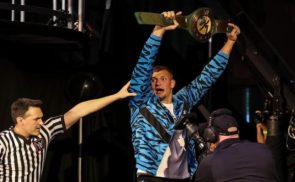 Update On MVP’s Role In WWE