Another NXT Show Was Planned With A Pilot Shot

Of course we can have more. There is a lot of WWE programming today, with more weekly programming than the company has ever regularly had before. Combining Monday Night Raw, SmackDown and NXT, WWE offers seven hours of television and that isn’t even counting their secondary shows. That’s a lot of time spent watching wrestling and we almost got more.

One of the biggest changes brought about during the Wednesday Night Wars was the expansion of NXT from one hour to two. That was quite the change after the show had spent so much time at a single hour a week. Things had to change, but NXT had the roster to make it work. However, they might not have had the roster to make an abandoned idea work as well.

According to Fightful Select, NXT had been discussing a potential second show called NXT Underground, which would focus on the NXT wrestlers who were rarely on the regular television show. The recently signed Evolve wrestlers would have been featured on the show as well. A pilot episode was even shot last year at the Performance Center. The show would have had nothing to do with Raw Underground other than having the same name.

NXT has been doing rather well above ground. Check out what they have been doing lately:

Opinion: I’m not sure what this would have been but at the same time the idea of having another hour (at least) of WWE programming is quite a lot to take. You can only put on so much content before it stops working and WWE is rapidly approaching that level. At some point WWE has too many wrestlers and too much content going on that it stops mattering as much as it did before.

What do you think of the idea? Will it ever be a regular series? Let us know in the comments below. 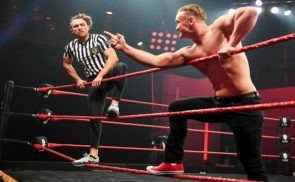