Welcome back. There are a lot of people involved in the wrestling industry every day but not everyone is going to stick around. Every now and then you see someone who has a strong career but then walks away from wrestling. That can leave a lot of people wondering what happened to them or if we will ever see them again. Now we will be seeing another former star again, albeit in a different role.

Wednesday night, WOW Women of Wrestling announced their return, which will take place in December with a new television show airing in syndication. According to the press release, by way of 411mania.com, former WWE Divas Champion AJ Mendez, formerly known as AJ Lee, will be an executive producer of the series, as well as providing color commentary on the weekly television show. There is nothing to suggest that Mendez will be wrestling again. This will be Mendez’s first involvement in the industry since leaving WWE in 2015.

Mendez was a heck of a star in WWE. Check out her time in the ring: 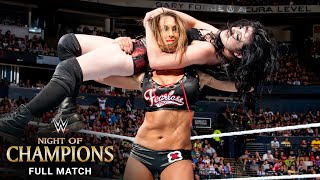 Opinion: This is something that could add in a nice bonus for the promotion as Mendez is someone who has a reputation in wrestling. She was one of the more accomplished in-ring performers as well as someone who has been around long enough for the fans to want her back. I’m interested in seeing how she will do in her new role and that is exactly why she has been brought in.

How will Mendez do in the role? Do you want her to wrestle again? Let us know in the comments below.