AEW Signs Star Who Had Drawn Interest From WWE

It’s bound to happen. The wrestling world has changed quite a bit over the last year and a half and so much of that is due to AEW. The new company has changed the way wrestling works and for a lot of people, that is a very good thing. Above all else, AEW has given the wrestlers a new place to go and you can never have enough of that. They have recently signed some new wrestlers, despite WWE having some interesting one of them.

AEW has long since put an emphasis on their tag team division. Since the company began, the company has treated its tag team division as a much bigger deal than WWE. That has offered them quite a different way to go and it has made for some very interesting ways to go. Part of the reason it has worked so well has been bringing in new talent, and that is what they have done again.

According to PWInsider.com, AEW has signed the team of Anthony Bowens/Max Caster, who will be called the Acclaimed. WWE had been interested in signing Bowens for NXT but according to Fightful Select, the company never got back to Bowens after looking at him in 2019. There is no word on why WWE did not get back to him, allowing AEW to sign Bowens up instead.

Bowens has looked good in small doses. Check out what WWE missed out on:

Opinion: This is a weird one as I’m not sure what to think of it. WWE not remembering to get back to someone is not exactly surprising but then again they can have some serious issues with basic housekeeping like this. I’m not sure how big of a star Bowens was going to be in NXT, but good for him for getting a job elsewhere if WWE just couldn’t keep track of things. Hopefully he is successful in AEW, if nothing else just to spite WWE.

What do you think of Bowens? Where would he have been more successful? Let us know in the comments below. 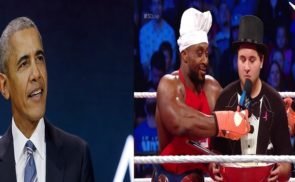