It’s the go home show for All Out and the big deal is that CM Punk is here in Chicago again. They’re still at the point where it feels important even though it happened two days ago, and it isn’t like they’ll be in Chicago every week. Other than that, expect a lot of hype towards the pay per view. Let’s get to it.

Johnson grabs a headlock to start but gets shoved into the ropes. Said ropes are grabbed out of fear of Black Mass, with Jericho and Henry thinking pain is coming. Black continues to take his time before knocking Johnson into the corner as we take a break. Back with Johnson striking away to send Black outside.

The big dive drops Black again and they head back inside so Johnson can hit a frog splash for two. Black kicks him in the head but would rather hammer away in the corner instead of covering. It’s time to grab a chair but Black slowly offers it to Johnson. That’s fine with Johnson, who picks it up, earning himself Black Mass to drive the chair into his face. Black gets the easy pin at 9:56.

Post match Black stands over Johnson but Dustin Rhodes runs in for the save.

Here is Miro for a chat about Eddie Kingston. Miro talks about Kingston being a Mad King, but Miro only serves one king. His God has told him to destroy Eddie, who is nothing more than Jon Moxley’s bag boy anyway. Cue Kingston to say Miro as God’s favorite champion is BS. Kingston doesn’t care what Miro says because he is here to deal with Miro’s sins. He knows about Miro’s bad neck and is coming for it, but Miro runs from the brawl. That’s fine with Kingston, who gives chase but runs into the TNT Title to the head. They get inside where Kingston hits a spinning backfist into the DDT to drop Miro.

Britt Baker is here with Rebel and Hayter. Statlander gets driven into the corner to start and Hayter hammers away, with Rebel getting to come in for some beating of her own. There’s a toss suplex to drop Statlander for two but Rebel’s YES Kicks don’t do much good. Instead, Statlander is back up with a powerslam and takes an invading Hayter down as well.

A backsplash crushes both Hayter and Rebel for two and Hayter is low bridged to the floor. Rebel gets caught in an electric chair so Hayter charges…and gets caught in a World’s Strongest Slam at the same time. A kick to the head rocks Rebel and it’s a weird arm trap Liontamer to make Rebel tap at 4:11 as Baker and Hayter watch from ringside.

Post match the beatdown is teased but Red Velvet runs in for the save.

We look at the build to the Lucha Bros vs. the Young Bucks in a cage at All Out, including the big beatdown from the Elite on Dynamite.

All Out rundown. Jon Moxley and Satoshi Kojima got in a fight at the press conference for their match earlier today.

We get the split screen interview, with 2.0 saying Daniel Garcia is going to keep Darby Allin out of All Out. Allin isn’t looking past Garcia tonight because he wants to look at CM Punk one more time before All Out.

Sting and 2.0 are here too and CM Punk, in a Bret Hart shirt is out for commentary. Allin stars fast and takes Garcia down to hammer away. They head outside, where Allin misses a charge and falls over a table, sending himself hard into the barricade. Sting beats up 2.0 to give Allin some time but Garcia sends Allin into the steps to keep him in trouble. Back in and Allin grabs a Fujiwara armbar but Garcia is right back up. Garcia catches him on top for a superplex and a near fall as we take a break.

Back with Garcia grabbing a sleeper so Allin climbs the ropes. The big drop down onto the mat breaks things up and Allin grabs the Pepsi Twist (an old Punk move), for two and some applause from Punk. Code Red gives Allin two as Punk wants to know why so many moves are named after soda. Allin grabs the Last Supper for the pin on Garcia at 10:48.

Post match 2.0 comes in for the beatdown and Punk stands up, eventually throwing down the headset. Punk stares 2.0 down and Allin hits a big suicide dive onto both of them. Allin stares Punk down to end the show. 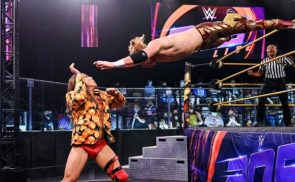 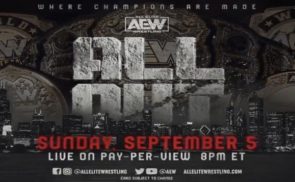