It’s another big night as we have a potential classic on our hands with Bryan Danielson vs. Eddie Kingston. If that isn’t enough, we also have Britt Baker vs. Abadon in a street fight and Dante Martin vs. Matt Sydal Part III. Rampage benefits a lot from the shorter time frame so they should be good to go again here. Let’s get to it.

Kingston drives him up against the ropes to start and fires off a hard chop. More chops in the corner rock Danielson but he moonsaults over Kingston to set up the running clothesline. Kingston needs a breather on the floor but comes back in and blocks a single leg. Instead it’s Danielson being taken into the corner for more hard chops and a running knee to the ribs.

Danielson staggers around with his chest getting very red until Kingston pulls him down into a chinlock. More chops have Danielson’s chest looking BAD as we take a break. Back with Danielson kicking Kingston down on the floor but walking into a Saito suplex. Danielson beats the count so Kingston suplexes him again for two more, setting up something like a dragon sleeper. Kingston puts Danielson on top but a top rope superplex is broken up with a headbutt.

Danielson crotches him on top and hits the belly to back superplex to put them both down. Some AFFIRMATIVE Kicks have Kingston rocked and a big kick to the head puts him down again. Danielson goes for the arm but Kingston slips out, setting up the backfist to the head. They’re both down so the fans give them a standing ovation. Kingston goes to pick him up but gets pulled into the triangle choke. Danielson elbows away so Kingston flips him off and passes out at 16:24.

Post match, Kingston walked away from the offer of a handshake.

CM Punk is having a good week but a ranting and raving Eddie Kingston comes in. Some wrestlers break it up and Punk offers to put Kingston to sleep again.

It’s part three of a trilogy and Lio Rush is here with Martin. They stare each other down to start and take their time, with commentary thinking they’re off to a classic. Neither can hit a snapmare but Martin sends him outside for the middle rope moonsault to drop Sydal one more time.

We take a break and come back with Sydal kicking at the legs to slow Martin down but Martin goes after the knee as well. Sydal goes up but gets shoved off the top, only to avoid Martin coming off the top. The Lightning Spiral is blocked as well and Martin hits the double springboard moonsault press for the pin at 10:59.

We get the face to face with Abadon and Britt Baker. Abadon can’t talk but Baker says she has some tricks for her. Then Abadon disappears so let’s move on to the main event.

Non-title and anything goes, with Abadon getting a title shot if she can win. Jamie Hayter and Rebel, as zombies, are here too. Feeling out process to start with Baker bailing out to the floor in a hurry. Rebel and Hayter grab a table and we take an early break. Back with Abadon putting a chair on Baker and hitting a running backsplash.

Baker sends her face first into a chair in the corner and they head to the apron. The swinging neckbreaker sends them both onto (not through) the table and a suplex doesn’t put Abadon through it either. Abadon does the zombie situp and pulls out the thumbtacks, which has Baker panicking. A Rock Bottom onto the tacks gives Abadon two but Baker pelts a chair at her head.

Baker wraps a chair around Abadon’s neck for the running stomp but Abadon gets back up. Baker puts tacks in Abadon’s mouth and superkicks her, setting up Lockjaw. Abadon bites her way to freedom so Hayter comes in to deck Abadon. That doesn’t work so Abadon grabs Rebel, allowing Baker to roll her into the tacks for the pin at 11:18. 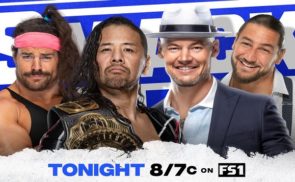