We’re live this week and not taped after Dynamite for a change. We’re also back in the old stomping grounds of Jacksonville and the card happens to be stacked with three title matches in an hour. That should be enough to carry the show, though Rampage has a bad tendency to underwhelm. Let’s get to it.

The Acclaimed is defending and it’s titles vs. the SCISSOR ME trademark. The Athletes tease an early scissoring and get jumped from behind, only to send the champs outside. Back in and the Acclaimed break up some more scissoring and a powerslam plants Woods. Caster gets knocked outside, where Billy Gunn chases Tony Nese around. That’s enough for a Gunn ejection, much to Sterling’s delight.

We take a break and come back with Bowens getting the tag to come in and clean house. Everything breaks down and Woods hits something like a spinning GTS to drop Caster. Woods drops Bowens and the Angle Slam/neckbreaker gets two with Caster having to make the save. Nese kicks Caster in the face and dives onto Bowens on the floor. Back in and Bowens slugs away, setting up the Arrival into the Mic Drop to retain the titles at 8:03.

Post match Sterling says that trademarks don’t end like that so the Acclaimed beat him up, stomp him low, hit Scissor Me Timbers and scissor with Billy Gunn.

Jade Cargill isn’t happy that Penelope Ford is injured but she is willing to let Leila Grey take her place. Then she gets the TBS Title back from Nyla Rose.

Ortiz/Eddie Kingston and the Lucha Bros are in the back in an attempt to make peace. The Bros want Eddie to keep his temper and avoid losing another job. Pac comes in and seems to mock Kingston, who has to be held back.

Hook is defending and turns down Daivari’s offer of cash for the title. That’s not cool with Hook, who suplexes Daivari at the bell and they start fast, with Daivari being sent outside for a ram into the table. Daivari’s butler Jeeves K is here and slaps Hook in the face with some money. Hook fights out of the corner with rights and lefts to the ribs and an STO. A release fisherman’s suplex drops Daivari, who uses a Jeeves distraction to set up his own suplex for two. The hammerlock lariat is countered though and Redrum retains the title at 2:50.

Matt Hardy is annoyed at the Firm, who have sent Private Party off for a match. For now though, Matt can have a match on Dark: Elevation.

Kiera Hogan is here with Grey. Nightingale wrestles her down without much effort to start before running Grey over with a shoulder. Back up and Nightingale easily slams her but Hogan gets in a cheap shot superkick to take over. We take a break and come back with Nightingale spinebustering Grey for two but getting caught in a Russian legsweep. Grey hits a running knee in the corner but gets belly to back suplexed. A kick to the head rocks Grey and a doctor bomb gives Nightingale the pin at 7:50.

Post match Nightingale is announced as officially All Elite but here is Jade Cargill to interrupt. Nightingale leaves so Cargill has a seat in a chair and gives Nyla Rose ten seconds to come get the title. Rose and the rest of the Vicious Vixens pop up on screen in a car. Rose drives off with the title….and apparently that’s Cargill’s car. Cargill sits down, saying she isn’t leaving without her belt. Security comes in and gets dropped, which is enough for Cargill to leave.

Last night, Rush threatened 10 with a beating. Orange Cassidy popped up from behind a bar to offer them beers. Oh and he’ll join their match to make it an All-Atlantic Title triple threat.

Orange Cassidy tries to steal Mark Henry’s job but Henry asks why Cassidy is getting into Rush and 10’s business. Cassidy: “Um, I don’t know.” 10 and Rush want to win the title while dealing with their personal issues too.

Cassidy is defending and Rush has Jose the Assistant with him, while Cassidy has Danhausen. 10 and Rush slug it out but Cassidy gets involved with the lazy kicks. Rush sends 10 outside, leaving Cassidy to dropkick Rush. That’s fine with Rush, who sends him into the corner for the running slap into the Tranquilo pose. Rush goes outside to send 10 into the barricade but 10 is back with his own shots. Cassidy dives at both of them but gets caught and chokeslammed onto a table (which doesn’t break).

We take a break and come back with Cassidy having to block 10’s full nelson before hitting a Stundog Millionaire. The spinning DDT plants Rush and there’s the Beach Break for two on 10, as Jose breaks it up (JR: “It’s a mockery of the rules!”). Danhausen comes in and hits Jose low but Rush knocks him down as well.

A suplex sends Cassidy into the corner but 10 is back up with his spinebuster. 10 discus lariats Cassidy for two, with Rush having to dive in for the save. Rush messes with 10’s mask but walks into the Orange Punch. Another Beach Break is countered but Cassidy sits down on 10 to retain at 11:48.

Post match 10 and Rush have a staredown but -1 comes out and gets carried to the back by 10.

We get an In Memoriam graphic to Brian Muster, a video engineer who died unexpectedly this week. 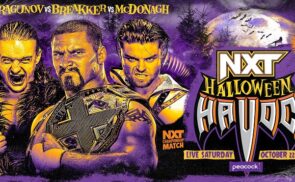 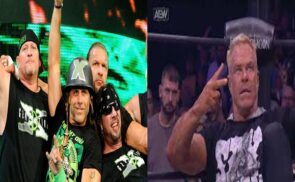