We’re fresh off of Full Gear and the next big thing, probably for their upcoming Clash Of Champions style special, is Hangman Page defending the World Title against Bryan Danielson. That will be more than enough to carry the shows for a bit, but we should be in for some other stuff this week. What other stuff? Well probably some AEW stuff. Let’s get to it.

The Gunn Club and Sting are all here. Feeling out process to start with Gunn not seeming that worried here. A test of strength isn’t happening but Gunn hits a heck of a backdrop to send Allin bailing for a breather. Gunn follows him out and sends him back inside, albeit with a pause for a staredown with Sting. After a hug to Austin Gunn, Billy pulls Allin out from under the ropes for a crash to the floor.

Another Sting distraction doesn’t do much for Allin, who misses a dive and crashes into the barricade as we take a break. Back with Allin biting his way out of a superplex attempt and diving onto the rest of the Club. Allin gets back inside but is sent into the corner. Billy does the Sting shout but misses the Stinger Splash. Instead Allin hits a flipping Stunner into the Coffin Drop for two. Another Coffin Drop pins Gunn at 8:51.

Post match the Gunn Club beats down Sting and Allin to leave them laying.

We recap CM Punk interrupting MJF without saying a word.

QT Marshall wants to beat up CM Punk in his hometown of Chicago. Various threats are made to Punk and Tony Schiavone isn’t impressed.

The Men of the Year say that the Inner Circle won at Full Gear, but this isn’t over. Beating a manager doesn’t mean anything and you’ll see American Top Team Again.

Velvet goes right at her to start and ducks a pump kick. Cargill tries a powerbomb but Velvet counters with a failed sunset flip attempt. A fall away slam sends Velvet flying and there’s a knee to the ribs to make it worse. Back up and Velvet kicks dropkicks her to the floor for a crash.

Velvet loads up a dive but pauses to get hung up in the ropes, allowing Cargill to get in a slap. A chokeslam onto the apron connects and we take a break with Velvet in trouble. Back with Cargill unloading in the corner and then stopping for some pushups. Velvet uses the distraction to kick away at the ribs, setting up some running knees to the back. Cargill is right back up with a big boot to the face to cut Velvet off in a hurry but Jade is blocked. The Final Slice is blocked as well though and a fast Jaded gives Cargill the pin at 9:44.

Thunder Rosa is ready to beat Jamie Hayter and move on to the next round. Rosa yells in Spanish a lot.

CM Punk is ready to face QT Marshall in Chicago. You don’t come into his hometown on the day before Thanksgiving because we’ll find out who the turkey is.

We look back at the confrontation between Bryan Danielson and Hangman Page on Wednesday with Danielson going evil before their title match.

We get the face to face showdown between the Superkliq and Bobby Fish and Jurassic Express/Christian Cage. Cole rants about the Conchairto being used to try to get rid of them but Jungle Boy talks about how he has beaten Fish before. Christian thinks it’s interesting to see the Superkliq talk when they have the numbers advantage. Fish can be there, but Cage is bringing his own friend, which means a chair.

The villains start beating on Jungle Boy in the corner as we take a break. Back with Jungle Boy fighting out of a chinlock and hitting a rebound lariat. That’s broken up but Jungle Boy can’t get to the ropes. Cole misses the Boom though and it’s Luchasaurus getting the tag to clean house. Everything breaks down and the Express starts cleaning house. The Extinction Level Event gets two on Cole but Luchasaurus is sent outside.

What used to be Chasing the Dragon gets a very close/surprising near fall on Jungle Boy. The Snare Trap is blocked but a springboard is cut off by Cole’s superkick. The Panama Sunrise is countered into a powerbomb but Fish breaks up the cover. Fish hits a running splash to Jungle Boy in the corner and it’s time to kick at the legs. Jungle Boy suplexes a charging Fish into the corner and here are the Young Bucks for a distraction. Christian comes out to chase off Cole and the Bucks, leaving Jungle Boy to Snare Trap Fish for the tap at 15:07.

Replays and posing take us out. 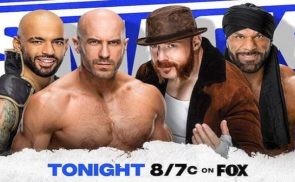