We are done with Forbidden Door and that means it is time to start moving forward. In this case that means we need a new challenger for Jon Moxley’s newly won Interim World Title. We can find that out tonight in what sounds like a Royal Rumble for the #1 contendership. That should be enough to carry the show so let’s get to it.

So this is a two ring battle royal, but not in the traditional sense. Instead, there are two rings with a separate battle royal going on in each. Once there is a single person left in each, they will have a two man battle royal for the shot. It is also Royal Rumble style entrances and it’s Hangman Page/Powerhouse Hobbs in blue and Darby Allin/Tony Nese in red to get things going.

Nese kicks Allin down and poses as Hobbs powers Page around. Page low bridges Hobbs to the apron as Ricky Starks is in the red ring. Team Taz starts double teaming Page as Allin springboards into an elbow to Nese. Smart Mark Sterling grabs Allin’s leg for a distraction, only to have Allin backdrop Nese out. Allin dives onto Nese for fun as Butcher is added to the blue ring. John Silver is in the red ring and starts to clean house until Page helps him with a double suplex on Hobbs.

Brody King completes the red ring, giving us a final field of King, Hobbs, Lee, Rhodes, Martin, Starks and Page. Orange Cassidy finishes the blue ring, giving us Cassidy, Allin, Takeshita, Butcher, Blade and Strickland. King tosses Martin as Cassidy starts cleaning house in the other ring. Takeshita stares him down and hits a chop But Cassidy tries a DDT….and we cut to the other ring. Dustin is out and so is Takeshita, the latter of which at the hands of Butcher and Blade.

We get a SPLIT SCREEN to show both rings for a few seconds as Swerve tosses Cassidy and Lee knocks out Hobbs. Starks dumps Lee and Butcher/Blade get rid of Serve. Page fights back on King and Starks, with Starks being low bridged out.  King knocks Page out to win the ring though, quickly followed by Allin getting rid of Butcher and Blade to win his ring. King immediately powerbombs Allin and throws him into the other ring (not an elimination), followed by one heck of a Cannonball. Allin manages to get him to the apron but King pulls Allin to the apron with him. The sleeper knocks Allin out and King drops him down to win at 22:47.

Hook isn’t talking in another interview so Alex Marvez asks if he is a go with the flow type person. That’s too far for Hook, who grabs Marvez by the shirt and says that’s other people’s problem.

Non-title. Nick and Goto start things off but everything breaks down in a hurry, with Goto and Hashi clubbering Nick down. Matt comes in for the rolling northern lights suplexes before hitting one on both Goto and Hashi at the same time. The Bucks hit a big flip dive to the floor and we take a break.

Back with Goto and Matt getting the double tag so Goto can clean house. Matt takes Goto down and Nick hits a running knee to the face for two. Hashi is back in for the save and it’s a running Blockbuster/Russian legsweep combination for two on Matt. Hashi seems to kick Nick away without making contact but the GTR/powerbomb combination that gave them the win on Sunday is broken up.

Jonathan Gresham is ready to face Tully Blanchard’s monsters next week on Rampage. Gresham is tired of his name being out of the discussions of the best and that is changing next week.

Nyla Rose is tired of Toni Storm running her mouth so she is ready to crush her. Storm is sick of her too.

Marina Shafir is here with Rose. Storm tries to start fast and is quickly knocked down with a hard clothesline. Rose works on the arm until Storm fights up, only to have Shafir low bridge her to the floor. We take a break and come back with Rose hitting a running splash in the corner, setting up a missed Cannonball. Storm is back with the running hip attack and a double DDT plants Rose and Shafir on the floor.

Back in and a high crossbody gets one on Rose but the Beast Bomb is countered. Rose sits on her chest for two but Storm slips over the shoulder to escape another Beast Bomb attempt. The turnbuckle pad is ripped off and Rose superkicks Storm down for two. Rose misses her top rope knee though and a German suplex gives Storm two more. Shafir has to be kicked off the apron and it’s a pendulum DDT to give Storm the pin at 9:50.

Post match Shafir jumps Storm but Thunder Rosa makes the save, with Excalibur declaring them Thunder Storm to end the show. 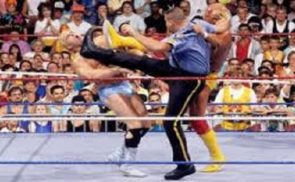 Money In The Bank 2022 Preview, Predictions And Thoughts