We are still in Horsemen Country and that means we should be in for another pretty good night. Rampage has found its groove in recent weeks and now it is time for a Tag Team Title match, as the Dark Order gets the first shot against Jurassic Express. Adam Cole is here too so let’s get to it.

The Best Friends and all of Adam Cole’s friends are here. They trade chops to start until Beretta tosses him down with a suplex. Back up and Beretta is sent to the floor and then into the barricade to put him in trouble for a change. They go inside again with Cole hitting his own suplex before Beretta is tossed right back to the floor. The Panama Sunrise is countered into a backdrop so Cole sends him into the barricade.

We take a break and come back with Beretta fighting out of a chinlock. A tornado DDT plants Cole and Beretta drops him down again for two each. There’s a German suplex to rock Cole again but he’s right back with a brainbuster onto the knee. Beretta doesn’t seem to mind as he comes back with a piledriver onto the apron.

That doesn’t seem to bother Cole either as he’s back with the Panama Sunrise maybe fifteen seconds later. Another Panama Sunrise is countered into a Saito suplex and a hard clothesline from Beretta. Cole still can’t hit the Panama Sunrise as Beretta reverses into Strong Zero for two. Everyone gets in a fight on the floor, allowing Cole to hit him low. The Boom finishes Beretta at 11:33.

Thunder Rosa and Mercedes Martinez are ready to hurt each other.

Everett gets sent into the corner but he does a handstand on the corner to escape. Back in and the C4 finishes Everett at 57 seconds.

Post match Shawn Spears asks if he (meaning CM Punk) is ready the best in the world. Spears doesn’t realize he has crossed a line until he is already over it and all it takes is one swing of his chair. Punk is going to be in the ring with a twenty year veteran and Spears is going to expose him.

We get an Acclaimed music video on Sting and Darby Allin, who the Acclaimed certainly don’t seem to like. They seem to think it’s weird that an old man is friends with a younger man, with references to Sting taking a buckle bomb and Sting having a bat for reasons of compensation.

They’re already in the ring when we come back from the Acclaimed video and it’s Hirsch being sent into the corner for some choking. Rose hits a belly to belly suplex but lets Hirsch get over for the tag to Stadtlander. Bunny comes in and gets taken down with a front facelock, followed by a powerslam for two. An assisted moonsault gives Hirsch two on Bunny so Velvet tags herself in, where Rose runs her over.

We take a break and come back with Rose hitting a chokeslam for two on Velvet, causing Vickie Guerrero to scream at ringside. Rose misses a backsplash though and the hot tag brings in Stadtlander to run Ford over. A sitout gordbuster gives Stadtlander two and the Spider Crab goes on, only to have Guerrero offer a distraction. Bunny kicks Stadtlander in the face for the save but gets caught in a Blue Thunder Bomb for two. Stadtlander and Hirsch collide though, allowing Bunny to roll Hirsch up for the pin at 9:13.

Scorpio Sky wants to know why he isn’t getting a TNT Title shot when he is the face of TNT.

Ricky Starks rants about Jay Lethal messing with Team Taz business so here is Lethal to interrupt. Lethal has been watching Starks for a few months now and doesn’t remember him wrestling very much. The challenge is thrown out for an FTW Title match, but Lethal knows Starks has to check with Taz. So whatever Daddy says, do the opposite. Referees have to break it up as Taz goes on a rant about how he doesn’t care what Lethal did in Ring of Honor.

We get the face to face main event interview. The Dark Order bust out some kazoos to play a song about joining them but Christian Cage doesn’t find it funny. Imagine what Jurassic Express is going to do to them tonight. Mark Henry hits his catchphrase, with John Silver mouthing along with him.

Jurassic Express, with Christian Cage, is defending. Reynolds works on Jungle Boys’ arm to start and armdrags him down. Jungle Boy pops back up with a dropkick and brings in Luchasaurus for a chop. It’s already back to Jungle Boy so Silver gets to come in and toss him around. Silver sends him outside for a big dive and we take a break.

Back with Jungle Boy slipping out of an electric chair and hitting a German suplex on Silver. They all go up top and Luchasaurus comes back in for the Tower of Doom. Luchasaurus is sent outside as well, leaving Dark Order to hit a bunch of shots to Jungle Boy, setting up a German suplex into a jackknife cover for two. A rebound lariat drops Reynolds for two but it’s Luchasaurus coming back in for the Extinction Level Event to finish Reynolds and retain at 12:43. 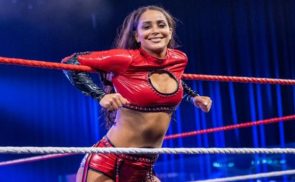 Bad News For Two WWE Stars Regarding The Royal Rumble