It’s time for what is likely going to be one of the best AEW shows in history as the card is stacked. AEW has shown that they can put together an awesome card and then deliver on the potential. I’m looking forward to more than a few things on the show and that is a great feeling to have. Let’s get to it.

The four of them are matched up in the TBS Title tournament and Vickie Guerrero is here with Rose/Hayter. Rosa and Rose start things off with Rosa grabbing some rollups for two each. A basement dropkick has Rose staggered and it’s off to Shida for a running knee in the corner. It’s back to Rosa, who gets powered into the wrong corner though, meaning the stomping is on. Rosa manages to roll away and brings Shida back in to start striking away as Serena Deeb is watching from ringside.

Hayter runs Shida over and grabs a chinlock before sending her into the corner for a bite from Rose. A double chokeslam gets two on Shida and it’s an Irish Curse to put her down again. Shida finally manages a German suplex and that’s enough for the hot tag off to Rosa. Everything breaks down and some running kicks to the face put the villains on the floor. The stereo dives take them down again but a Deeb distraction lets Vickie get in a shot to Shida’s knee. Back in and Rosa and Hayter fight straight back to the floor, leaving Shida to hurricanrana Rose for the pin at 12:33. 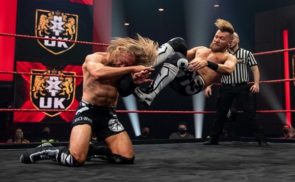