We’re a week away from Grand Slam and that means it is time to set up a World Title match. We have two semifinal matches in the title tournament this week and that should make for a good show. Other than that, we might get some more of the start of the build towards Full Gear. Let’s get to it.

No Tay Melo with Guevara but William Regal is on commentary. Guevara bails to the floor to start before coming back in and getting headlock takeovered. Back up and Guevara hammers him down in the corner, including some boot choking. They chop it out with Moxley laying down and feigning sleep before chopping more. Guevara sends him to the floor for the flipping suicide dive, followed by the running corkscrew dive. Moxley is sent into the steps and we take a break.

Back with Guevara blocking a piledriver on the apron and sending Guevara outside instead. Moxley hits the corner clothesline and rakes the back, setting up a butterfly superplex. Guevara manages an enziguri out of the corner and the top rope cutter gets two. The GTH is blocked but the King Kong lariat is countered into the bulldog choke.

With that broken up, Guevara is taken up top, only to have Anna Jay and Tay Melo come out. A Jay distraction lets Melo kick Moxley low, leaving Guevara to go up top, only to miss the Swanton. They slug it out until Guevara hits a jumping knee to stagger Moxley. The GTH is countered into the Death Rider for the pin at 13:25.

Here is MJF for a chat. He says he hasn’t slept since he and Jon Moxley went toe to toe last week. MJF doesn’t like Moxley but isn’t the same person he was when they met the first time. Moxley is someone playing a character and MJF knows it because he read Moxley’s book. Moxley isn’t a normal person because he was raised like these people right here in Albany: poor and uneducated, which is why they love him.

Now Moxley is playing with something a lot more dangerous than his disease. MJF knows that Moxley is still the scared kid from Cincinnati, no matter how much people cheer for him. Sure Moxley went to rehab but MJF is the demon that he can’t overcome. Now though MJF has some backup that is going to help him take the title so here is the first stable on retainer: Stokely Hathaway and the Firm.

MJF leaves and Hathaway is going to tell us the gospel. He and MJF are best friends and Hathaway talked him out of quitting AEW. They prayed a lot and the men in this ring are his support system. Each of them will help MJF when necessary before going their separate ways. Hathaway is a friend who kicks it with Britt Baker and watches reruns of Living Single with the House of Black.  Hathaway talks about each member, saying he loves and appreciates them but thinks they could use some gold. Or to not be in their father’s shadow in the Gunn Club’s case. Either way, Hathaway is going to help get them what they want.

Jungle Boy wants to fight and has issued an open challenge.

Jay Lethal is down to face Jungle Boy.

Satnam Singh and Sonjay Dutt are here with Lethal while Jungle Boy’s back is taped up. Lethal takes him into the corner to start and something involving running the corner is blocked. Jungle Boy is right back up and runs the corner for a wristdrag. Back up and Lethal goes for the leg but Jungle Boy sits down on him for two instead. A quick distraction lets Lethal get in a shot to the bad back, setting up a middle rope backbreaker onto the turnbuckle as we take a break.

Back with Jungle Boy winning a slugout but his back gives out on a suplex attempt. Jungle Boy pops back up for a brainbuster and goes to the middle rope, only to get Russian legsweeped down. The Lethal Combination sends Jungle Boy outside for the suicide dive, setting up the top rope elbow for two back inside. Lethal loads up a pump kick but gets pulled into the Snare Trap and Lethal taps at 10:34.

Action Bronson and Hook train for the Jericho Appreciation Society.

Ethan Page kicks pizza maker Luigi Primo in the face because no one takes his place seriously. Danhausen pops in and gets a match with Page on Rampage.

Spinebuster finishes for Hobbs in 26 seconds.

Post match Hobbs says Ricky Starks is tough but it took him 4:35 to win at All Out. Damage starts tonight, but here is Starks through the crowd to interrupt. Starks charges the ring and clears Hobbs out.

The Lucha Bros are ready for their Tag Team Title shot.

Tag Team Titles: Lucha Bros vs. Swerve In Our Glory

The Bros are challenging and Pentagon strikes away on Strickland to start. It’s way too early to snap the arm so Penta settles for a kick to the ribs instead. Fenix comes in with a rolling dropkick, drawing some polite applause from Lee. There’s the assisted wheelbarrow splash for two but Strickland gets in a shot of his own and brings Lee in to shrug off some chops as we take a break.

Back with Fenix slipping out of a Gory Stretch and bringing Penta in to clean house. The Fear Factor is broken up though and a kick to the face allows Strickland to bring Lee back in. Lee wrecks the Bros but Penta manages a Canadian Destroyer on Lee for a very delayed two. That’s enough for Lee, who is back up with a Big Bang Catastrophe for the pin to retain at 8:12.

Result: Swerve In Our Glory b. Lucha Bros – Big Bang Catastrophe to Penta (8:12)

Post match here is the serious Acclaimed to promise to win the titles next week. They kind of have to.

Pac doesn’t like that loss being called a bump in the road and wants more respect. Orange Cassidy comes in with an Orange Punch and suggests he’s taking one of Pac’s titles.

Rebel is here with the villains. Deeb and Storm trade takeovers and headscissors on the mat to start until Storm gets her into the corner and chops away. Athena comes in with a slingshot splash for two and an over the shoulder spin into a Codebreaker drops Deeb again. Baker offers a distraction though and Deeb takes the knee out as we take a break.

Back with Storm getting the hot tag to clean house, including a tornado DDT to Baker on the floor. Baker is fine enough for a Sling Blade back inside so it’s off to Athena vs. Deeb again. Athena has to power out of an armbreaker and brings Storm back in. Deeb grabs a half crab and shrugs off shots from Athena to keep Baker in trouble. Baker adds a basement superkick to Storm for two, with Athena having to backsplash the pile for the save. Athena is sent into the steps so Rebel offers a distraction, allowing Deeb to send Storm into a Baker held chair. Storm is out and Deeb gets the pin at 8:37.

Result: Britt Baker/Serena Deeb b. Toni Storm/Athena – Storm was sent into a chair (8:37)

Post match Athena comes back in and gets Stomped for her efforts. Jamie Hayter runs in to break up another chair shot but beats Storm down with the chair instead. Hayter yells at Baker, who still says she is sorry.

Mark Sterling is ready for Josh Woods to win the ROH TV Title on Rampage.

William Regal is on commentary. Danielson starts fast by firing off the kicks in the corner. There’s the running dropkick in the corner as we see Daniel Garcia watching, because of course he’s featured here too. Jericho fights back but gets taken outside with Danielson starting in on the arm.

Back in and the missile dropkick sets up the Swan Dive for two. Jericho manages a release German suplex into the triangle dropkick to the floor. They get back in for a chop off until stereo crossbodies leave them both down. We take a break and come back with Jericho snapping off a super hurricanrana but the Judas Effect is countered into a suplex for two.

Cattle Mutilation doesn’t finish Jericho so Danielson fires off the Hammer and Anvil elbows. Jericho reverses into some of his own, followed by a Codebreaker. Danielson isn’t having that and pops up with the running knee for the double knockdown. Back up and Jericho sends him over the top to the floor, where Danielson comes up grabbing his ankle.

Jericho isn’t going to let the doctor check on Danielson so he wraps the leg around the post. With the leg banged up, Jericho grabs a half crab and pulls Daniels back into the middle for a Figure Four. Somehow Danielson escapes and gets him into the LeBell Lock for the tap and the title match at 19:40.

Post match Jon Moxley comes out for the staredown with Danielson as William Regal looks anxious. The handshake ends the show. 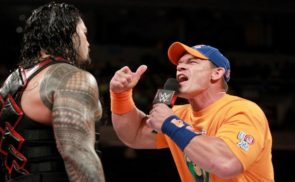 Roman Reigns Admits He Blanked During Promo With John Cena