It’s the third anniversary of Dynamite and you know that means we are going to be seeing something special. In this case we have a big tag match main event as Chris Jericho and Sammy Guevara are facing Bryan Danielson and Daniel Garcia. As a bonus, the show is an extra fifteen minutes long tonight so let’s get to it.

William Regal is on commentary and doesn’t think much of MJF, even if the fans seem to like him. Wheeler sends him into the corner to start and we hit the Fargo Strut for some old school flare. A dropkick just annoys MJF so he takes Yuta down and grabs a chinlock. Back up and MJF grabs a tilt-a-whirl faceplant as we take a break.

Back with Yuta whipping him hard into the corner and grabbing a small package for two. Yuta grabs some rolling German suplex for two but his hurricanrana is countered into a powerbomb onto a knee. They go to a pinfall reversal sequence for several near falls each and then do it again for a bonus.

Back up and a double clothesline puts them down, which is good for a standing ovation. MJF takes him up top for a super Tombstone but gets countered into a super hurricanrana. Yuta goes up for a splash but MJF rolls away and flips him off. That’s fine with Yuta, who hits a heck of a dive into the splash for two anyway. Yuta tries the Seatbelt but gets pulled into the Salt Of The Earth for the tap at 15:00.

Post match Yuta offers MJF the handshake and MJF considers it, only to have Lee Moriarty jump Yuta from behind. Cue Stokely Hathaway with the Dynamite Diamond, which MJF reluctantly puts on. That’s enough for William Regal, who gets up from commentary and LOADS UP THE BRASS KNUCKLES. MJF and company leave, albeit with MJF glaring at Regal.

The Jericho Appreciation Society isn’t happy with Garcia and punishment is promised.

Feeling out process to start with Lethal sending Allin out to the floor. Allin is right back in for the springboard high angle armdrag into a standoff. Lethal gets smart by going after the knee but gets caught in a Scorpion Death Drop for a double knockdown. We take a break and come back with Lethal staying on the knee, including a super dragon screw legwhip.

Video on Brian Cage and the Embassy.

Cage, with Prince Nana, is challenging. They fight into the corner to start with Cage hitting a running clothesline but not being able to drop him. A hurricanrana sends Wardlow into the ropes but he catches a 619. Wardlow plants him with a World’s Strongest Slam but the Powerbomb Symphony is countered as we take a break.

Back with Wardlow fighting out of the corner and hitting a Whisper in the Wind of all things. A series of suplexes rock Cage but he catches Wardlow on top with a kick to the head. The apron superplex gets two on Wardlow, who is fine enough to come back with a spinebuster. Not to be outdone, Cage hits an F5 but tries his own powerbomb. Wardlow headbutts him a few times and hits the four movement Powerbomb Symphony to retain the title at 10:03.

Post match the Gates of Agony come in for the beatdown on Wardlow but Samoa Joe runs in for the save. Cage is back up but FTR comes in for the real save.

Britt Baker says Saraya isn’t cleared to wrestle so this is still her house.

Saraya is here to cancel out Rebel and Britt Baker. Willow and Hayter start things off but it’s off to Athena vs. Ford instead. Athena hits a basement dropkick but Ford is back up with a handspring elbow back in the corner. Deeb comes in and gets dropped by a springboard spinning crossbody. It’s off to Storm to run Deeb down down and pound away with the forearms to the back. Deeb gets sent into the corner for some running charges, including Storm’s running hip attack. Deeb is right back up and takes out Storm’s leg as we take a break.

We come back with Storm fighting out of a chinlock and forearming away at Deeb. Everything breaks down and Deeb leglocks Storm as she suplexes Athena, with Hayter doing the same thing to Nightingale. Back up and Storm gets over for the tag off to Nightingale for a spinebuster on Hayter. Rebel loads up a crutch shot but Saraya makes the save. We hit the parade of secondary finishers until Ford gets a quick two on Nightingale. Ford’s handspring elbow is broken up and a doctor bomb gives Nightingale the pin on Ford at 9:29.

Post match we get the big staredown, with Saraya getting in a fight with Baker. A low superkick from Saraya drops Rebel.

Rush and Jose the Assistant aren’t pleased with Private Party.

Here are the Acclaimed and Billy Gunn, because it’s National Scissoring Day. The champs talk about their success and say AEW now stands for ACCLAIMED EVERY WEDNESDAY. Bowens talks about how scissoring is something that makes you friends and partners. The fans want a real team rather than two people thrown together like Keith Lee and Swerve Strickland (dubbed Sneaky Swerve).

Billy talks about how this is a special day and he has a present from city hall: some GIANT GOLD SCISSORS! Billy: “No running with scissors please.” Bowens wants to see some scissoring before Caster talks about his dad winning a Super Bowl for the local NFL team. That Super Bowl ring is his prized possession and now he is proud of his son becoming a champion too. For now though, we are in a city that represents the divide in America. However, everyone loves the Acclaimed and scissoring goes beyond left and right and red and blow.

We load up the three way scissoring to unite America but Swerve Strickland cuts them off. Swerve wants the titles back and doesn’t like Billy Gunn, even pulling out a rock, which beats scissors. The challenge is on for Billy vs. Swerve next week….and here is Mark Sterling of all people. He wants in on the scissoring and gets beaten down in a bit of a bizarre cameo. Billy accepts Swerve’s challenge for next week and three way scissoring ensues.

Dark Order is ready to win the Trios Titles on Rampage.

Madison Rayne praises Skye Blue when Tay Melo and Anna Jay to come in and mock them. A sports entertainers vs. wrestlers challenge is on.

Jose the Assistant is here with Rush. Page gets shoved around to start but Rush has to bail from the threat of a Buckshot Lariat. They head outside with Rush whipping away with a camera cord and sending Page into the barricade. We take a break and come back with Page hitting a slingshot dive onto Rush before they get back inside. Rush stands on Page’s shoulders in the corner but gets taken down for two. Page has had it with him and gets in a hard clothesline. The Buckshot Lariat finishes Rush at 9:05.

Post match Private Party comes out but Jon Moxley comes through the crowd to say he has been waiting for this for three years. Moxley is ready for his match in his hometown at the arena he used to smoke and drink in. After he walks from his house to the arena, he is ready to beat Page and prove that he is the man around here. Moxley goes to leave but Page is ready to do this right now. Moxley calls him a sweet kid and says Page says stuff that gets him in trouble. He has thirteen days, so watch your d*** mouth.

Willow Nightingale wants to be TBS Champion so Jade Cargill and the Baddies come in. Nightingale can be #39, but she thinks she can be the 1 in 38-1.

A chokeslam and something like a reverse AA finishes Fuego at 23 seconds.

Post match Jungle Boy comes in with a chair to knock Luchasaurus outside. He and Luchasaurus were best friends but Luchasaurus chose Christian instead. Now Jungle Boy is going to break him piece by piece. Luchasaurus can pick the time and the place so Christian picks next week in Toronto.

Pac is ready for Trent Beretta.

Jericho and Garcia start things off to start, with Jericho armdragging him down. Garcia gets him to the mat and has a seat on Jericho’s back but a cheap shot from Guevara lets the villains take over. It’s off to Danielson to clean house and send Jericho outside for the suicide dive as we take a break.

Back with Guevara hitting a super Spanish Fly for two on Danielson and then posing with Jericho. Stereo crossbodies put Jericho and Danielson down though and it’s a double tag to Garcia and Jericho. Guevara gets dropped hard so we get the staredown into the hockey fight right hands. Garcia gets the better of things and kicks Jericho in the chest, setting up the Dragontamer.

Guevara makes the save but the Lionsault hits Garcia’s raised knees. Guevara tries to come in off the top but dives into a Crossface. Danielson grabs one on Jericho at the same time before they switch to stereo hammer and anvil elbows. Guevara comes back in and cleans house but Garcia counters the GTH into a piledriver. Jericho breaks it up so Danielson knees him from the apron.

A clothesline drops Guevara and Jericho drops Danielson onto a table. With that not being enough to break it, Jericho suplexes him through the table. Guevara’s shooting star hits raised knees though and now the Dragontamer….is broken up with a Jericho belt shot. That’s enough for Guevara to steal the pin at 14:23. 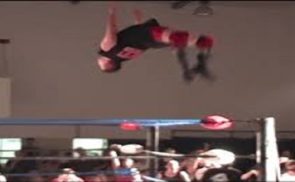