It’s another special event this week with Fight For The Fallen. There is another stacked card this week as well, as Jon Moxley is defending the Interim World Title against Rush, plus the return of Bryan Danielson. We are on the way towards All Out and it might be time to start setting things up for the pay per view. Let’s get to it.

Moxley is defending and gets jumped on the floor to start. They get inside with Rush stomping away in the corner and we’re off to the neck crank. It’s back to the floor with Moxley busted open and William Regal not being pleased on commentary. Jose the Assistant offers a distraction but Rush misses a chair shot. Moxley is right back with a suicide dive into the barricade and some hard chops to take over for the first time.

They get back inside with Moxley standing on Rush’s head in the corner but Rush plants him for a quick two. Back to the floor they go where Rush chokes him with a camera cord as we take a break. We come back with the two of them chopping it out and trading German suplexes. Moxley’s King Kong lariat drops Rush but he snaps off another German suplex to drop Moxley hard.

Back up and Moxley unloads with stomps to the head but Rush gets in a suplex into the corner. Rush takes him up top and is shoved down, only to have Andrade El Idolo come in to shove him down. The Lucha Bros chase Andrade out, leaving Rush to have the Bull’s Horns cut off with another lariat. A straitjacket piledriver gives Rush two but Moxley is back up with the Death Rider. The bulldog choke finishes for Moxley at 13:52.

Post match here is the Jericho Appreciation Society to say APPRECIATE US before Chris Jericho talks about everything the team is going to do tonight. New member Anna Jay changes her name to Anna JAS and promises to choke out everyone. Jericho rants about how he beat Eddie Kingston last week despite all of the injuries he suffered.

Now he wants a shot at Moxley to avenge his loss from two and a half years ago. They’ll fight at Quake By The Lake, which has Moxley saying he hates Jericho. After saying what Jericho can do with that INTERIM nonsense, Moxley says he wants to face the Jericho he saw for years. Not the Wizard or the Painmaker, but the Lionheart.

The Trios Titles are officially here and the inaugural champions will be crowned at All Out.

Dante Martin accuses Sammy Guevara of going soft but he has someone in his corner tonight: Skye Blue.

Video on Ricky Starks being a perfect choice for a champion.

Danhausen is challenging and mocks Starks’ pose instead of cursing him. Starks mocks the curse and gets kicked in the face. A northern lights suplex gives Danhausen one and he avoids a spear into the corner. The second spear connects though and Danhausen retains at 1:25.

Post match Starks is holding his neck but issues another open challenge for a second title defense.

Starks is defending and gets pounded into the corner to start. A t-bone suplex drops Starks but he’s back with a belly to back of his own. Hook flips out of a hiptoss and lands on his feet, only to get speared down. Roshambo is countered into Redrum and Starks taps at 1:33.

Post break Starks is in the ring with Powerhouse Hobbs to say he turned that title from a noose into a tie. He is the only one who could do that and he exceeded all expectations, working hard every week. People keep telling him to work hard and he’ll get his chance, but his chance was last month and his chance is right now. It isn’t a string of bad luck but bad timing….and then Hobbs lays him out. Taz isn’t sure what is going on as Hobbs hits the spinebuster.

The Acclaimed raps about the Gunn Club and tell us to watch their music video to see what kind of match they’ll have on Rampage. Friday is trash day.

Tay Conti is here with Sammy while Skye Blue is here with Martin. Guevara hits a shoulder to start but Martin is right back up with a headlock. A backflip over Martin picks up the pace and Guevara hits a dropkick before spinning into a pose. Martin gets in his own spin but is sent outside, only to switch places with Guevara. The big flip dive is dropped so Martin can moonsault into the middle to stare at Guevara.

Hold on as Guevara and Conti walk out, only to be jumped by Martin (well at least Guevara is). Martin hits a HUGE dive off the stage to drop Guevara again and we take a break. Back with Martin’s springboard dive being kneed out of the air but not being able to hit the GTH. Instead Martin grabs a Spanish Fly for two but the Nose Dive misses. Guevara’s springboard cutter connects (with Martin’s leg looking to collapse) and the GTH gives Guevara the pin at 8:46.

Post match Guevara goes after Martin again but Blue gets in the way. Cue Anna Jay to beat her down, only to have Ruby Soho, Eddie Kingston and Ortiz run in for the save. Martin is taken out and seems hurt.

Daniel Garcia is ready to beat Bryan Danielson and show that he is the best in the world.

Here is Jungle Boy for a chat in the ring, with Luchasaurus coming out with him as a bit of a surprise. Jungle Boy gets right to it by calling Christian Cage a coward. Cage is the most relevant he has ever been and then he turned on Jungle Boy over a battle royal? Shouldn’t a legend like Cage have enough money to not worry about that?

Oh yeah, Christian got divorced so his ex-wife took everything. Cage needed a bodyguard in Luchasaurus but he picked Jungle Boy’s best friend. We hear about Jungle Boy burying his father but we cut to Cage in the back, saying that Jungle Boy can pull up a grave next to his father. Cage knows all of Jungle Boy’s secrets and now he’s going to use them.

The Young Bucks want the Trios Titles but need a partner. Brandon Cutler offers his services but they run into Hangman Page. The Bucks seem to be interested in a reunion but the Dark Order comes up to with Page a happy birthday.

Keith Lee is barred from ringside. Nese takes Strickland into the corner to start but Swerve spins up into the anklescissors. A backbreaker lets Swerve go outside where Sterling offers a distraction. Some cheap shots from Nese put Swerve in trouble as we take a break. Back with Nese being knocked into the corner, which counts as a tag to Sterling.

Strickland keeps beating up Nese as Sterling won’t get inside, including a knockout kick to Nese. Since Nese is hanging from the bottom rope over the floor, Swerve adds the slingshot Swerve Stomp to knock him silly. Back in and the jumping kick to the head finishes Sterling at 6:42.

Post match We see Keith Lee down in the back with Josh Woods (who has been scouted by Nese and Sterling) standing over him. Nese uses the distraction to knock Strickland silly.

The House of Black wants to hurt Darby Allin while offering Miro the throne. Brody King challenges Allin to a coffin match.

Rosa is defending and they fight over wrist control to start. An exchange of rollups gets two each and that’s good for a standoff. Yamashita takes the leg out on the apron but Rosa knocks her down and chops hard against the barricade. A clothesline drops Rosa though and we take a break.

Back with the two of them slugging it out until Rosa hits a running kick to the chest against the ropes. Yamashita kicks her HARD in the head for two, with Rosa looking a bit rocked. A fireman’s carry is countered into a small package which is countered into a small package for two on Rosa (how she lost the first match for the callback). There’s a kick to Yamashita’s head though and a Fire Thunder Driver retains the title at 10:01.

Chris Jericho is on commentary and this is Danielson’s first match since May. Danielson starts fast with the kicks to the chest and Garcia is rocked early. A kick to the face doesn’t do much to Danielson, who backdrops Garcia to the floor, setting up the suicide dive. Back in and Danielson takes him down for the hard elbows to the head, much to the fans’ approval. Garcia is back up with a neckbreaker and sends Danielson outside.

The floor mat is peeled back but Danielson hits a running forearm to stagger Garcia again. The kicks to the chest set up a running dropkick. There’s a missile dropkick back inside and some forearms rock Danielson again. Danielson is back up and tries the backflip out of the corner but collapses when running the ropes. That’s fine with Garcia, who sends him into the steps and hits a DDT onto the exposed concrete.

We take a break and come back with Garcia stomping on a bloody Danielson before putting him on top. Danielson reverses into a belly to back superplex, which bangs up the head even more. It takes a bit but Danielson gets up and tries Cattle Mutilation, which doesn’t quite go on. Instead, Garcia hits the hammer and anvil elbows, which just bring Danielson back to his feet.

Danielson gives us a proper hammer and elbow demonstration and a reverse fisherman’s suplex. The running knee is countered into a brainbuster for two and it’s time to slug it out. Danielson sends him outside for the running knee from the apron but hang on as someone reaches from under the apron to grab Danielson’s boot. That’s enough for the piledriver to plant Danielson and the Sharpshooter goes on. Garcia cranks back and Danielson passes out at 17:04.

The hand was that of Jake Hager, who runs in to celebrate with Garcia and Jericho to end the show. 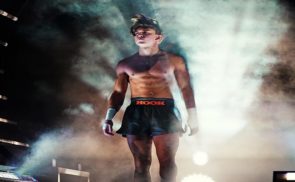 Even More Gold: AEW Introducing A New Set Of Titles, First Champions Coming At All Out