It’s time for the Shark Week show, because corporate synergy is a thing. That means a barbed wire match between Eddie Kingston and Chris Jericho, with the rest of the Jericho Appreciation Society in shark cages. That’s quite the way to go but I’m sure we’ll get something else big tonight. Let’s get to it.

Sting is here with Allin. They start fast with Allin knocking him to the floor for a suicide dive. Back in and King gets staggered again but is fine enough to shrug off a high crossbody attempt. King swings him around by the pants and Allin is sent outside, followed by some stomping back inside.

We take a break and come back with Allin hitting a suicide flip dive but a charge in the corner is countered into a sleeper. Allin tries to climb the rope but gets caught in the Tree of Woe for his efforts. The Cannonball only hits corner though and it’s a Code Red to give Allin two. Allin spins King over into a weird double arm crank, which is switched into a choke. With that broken up, King is sent to the apron where he grabs the hanging sleeper. Allin is mostly out but beats the count back in, setting up the Ganso Bomb to give King the pin at 12:29.

Post match King goes after Allin again but Sting comes in for the save. The Death Drop is loaded up but the lights go out, with Malakai Black popping up. King chokes Sting and it’s the black mist from Black as King chokes him out. Cue Miro to stare down the House Of Black but he doesn’t get in the ring.

Orange Cassidy and William Regal are on commentary. Moxley and Beretta start things off with some grappling until Moxley goes for the leg. Yuta comes in to face Chuck and gets shouldered down for an early two as Excalibur goes into a discussion about a trainer from Mexico. Cassidy: “Uh…..sure.” It’s quickly back to Trent to suplex Yuta and forearm him against the ropes. They head outside with Yuta being sent into the barricade as we take a break.

Back with Moxley getting the tag to take Trent’s head off, setting up the hammer and anvil elbows. Some stomps to the head rock Trent but Taylor makes the save. Yuta gets crotched on top and the Awful Waffle hits Moxley. Back to back piledrivers get two on Yuta and the Crunchie is good for the same, with Moxley making a save. Everything breaks down and Moxley Figure Fours Trent on the floor. That leaves Yuta to roll Chuck up (with an arm trap) for the pin at 11:50.

Video on Jonathan Gresham vs. Claudio Castagnoli at Death Before Dishonor.

Chompy, the Shark Week mascot, is at commentary for some fin pumping.

Here are Keith Lee and Swerve Strickland for a championship celebration, complete with champagne and cake. The fans sing BASK IN HIS GLORY so Swerve throws in a WHO’S HOUSE. After a YOU DESERVE IT and a plug for a rapper in the front row, Lee thanks Swerve to getting them here. Lee says they don’t look down on anyone so if you want a shot, come get one.

It’s time for a toast, but here are Mark Sterling and Tony Nese with A PETITION. The petition is almost complete but Sterling wants the rapper (Kevin Gates) to sign as well. Gates won’t sign, so Sterling says Gates’ music is terrible.

The Dark Order tries to be nice to Butcher and the Blade, even giving them matching BUTCH shirts. That earns them a beatdown, with Hangman Page making the save. Page: “You guys all right???” Silver: “No. We’re pretty bad.”

Christian starts with Pillman but hands it off to Luchasaurus before doing anything. House is cleaned so Garrison comes in, only to get beaten up as well. The double chokeslam plants the Blonds and Christian comes in to get the pin at 2:00.

Post match Christian gets on Luchasaurus’ shoulders to celebrate but Jungle Boy is back. Luchasaurus looks at Jungle Boy….and then stands beside him. Christian bails through the crowd with Jungle Boy giving chase.

The Gunn Club doesn’t want a match with the Acclaimed, but Austin Gunn will have a rap battle with Max Caster this week on Rampage. The winner gets to set up the match between the teams.

Starks is defending and sends Karter into the corner for some shots to the face. Karter gets a boot up in the corner and hits a high crossbody before knocking Starks outside. We take a break and come back with Karter missing a 450, allowing Starks to hit the spear to retain at 6:11.

Post match Starks says he’s got something left so let’s have another open challenge.

Starks is defending….or at least he was going to as he backs off and says we can do this next week. No match.

Here is FTR for a chat. They aren’t used to this kind of a reaction, but now it’s time to talk about their upcoming match with the Briscoes. On Saturday, it’s 2/3 falls for the Ring Of Honor Tag Team Titles. FTR respects the Briscoes and what they have done for wrestling, but no one is taking these titles from them.

Harwood talks about a girl with a hole in her heart which could have healed on its own but she might need open heart surgery. Three years went by, and the hole was completely closed. She fought to get better and did it, because that little girl is his daughter. If she can fight that hard, then her daddy has to do the same thing, which is what he’ll do on Saturday. Harwood is going to fight like a girl on Saturday so Top Guys out.

Jay Lethal is ready to win the Ring Of Honor TV Title but here is Christopher Daniels to say he’ll fight Lethal on Rampage.

Before the match, Stokely Hathaway says Leila Grey can’t compete but Kris Statlander is barred from the ring too. Cargill sidesteps Athena to start and hands it off to Hogan. That’s fine with Nightingale, who runs her over and hits a basement crossbody. Nightingale sends both of them to the floor and hits a running Blockbuster off the apron. Athena dives onto everyone and we take a break.

Back with Nightingale coming in to chop away at Hogan before we get the Cargill vs. Athena showdown. Cargill avoids a dropkick and hits a fall away slam but they both nip up. Some knees to the chest drop Cargill and Athena apron bombs Hogan. A Hathaway distraction lets Cargill send Athena into the steps and it’s Jaded to finish Nightingale at 8:26.

Thunder Rosa and Toni Storm are ready for Rosa’s title defense next week. Britt Baker and Jamie Hayter come in to laugh at them like the villains that they are.

Here is what is coming on future shows.

There is barbed wire everywhere, including around the microphone. The Jericho Appreciation Society is in a shark cage and Ruby Soho is in charge of the key and the cage’s lift. Jericho is the Painmaker, complete with spike jacket and barbed wire bat. Kingston grabs the mic and spikes Jericho in the head with it, allowing Jericho to blade on camera.

Cue Ortiz and company for the save, allowing Kingston to suplex Jericho through a barbed wire board in the corner for two. The Codebreaker cuts Kingston down for two more and some very weak barbed wire chair shots to the knee keep him in trouble. The Lionsault is cut off by Kingston tossing the barbed wire chair into the….well something on a flying Jericho. The spinning backfist gets two so the Stretch Plum, with barbed wire, goes on. Cue Sammy Guevara to break it up and the barbed wire Judas Effect gives Jericho the pin at 13:10.

Post match Kingston fights back and tries a spinning backfist to Guevara (which misses completely but Guevara falls outside anyway). That leaves Jericho to be thrown onto a barbed wire board to end the show, with Kingston looking mildly annoyed at the loss. 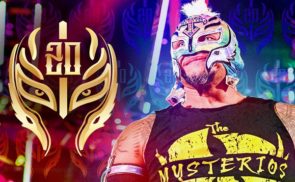 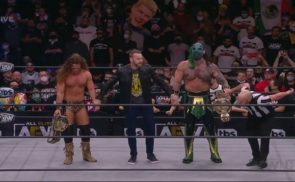