We’re rapidly coming up on All Out but first we need to get through this weekend’s Battle Of The Belts, which is apparently a thing that is happening. So far there is one match announced and that means we will probably get the rest of the card announced. Whether that is in rapid fire or with more traditional announcements remains to be seen, but Excalibur is probably warming up his throat. Let’s get to it.

Cassidy rolls him up to start and knocks Lethal up the ramp, setting up the lazy kicks. Lethal crawls away but it’s Satnam Singh waiting at the top of the ramp. Cue the Best Friends, with Trent on Taylor’s shoulders, to be taller than Singh, who leaves for no logical reason. With that HILARIOUS visual gag out of the way, we get back in and Cassidy hits a high crossbody but the tornado DDT is countered into a dragon screw legwhip. Cassidy’s knee is sent into the steps and we take a break.

Back with Cassidy being caught in a Figure Four but he rolls over to the ropes. Hail To The King is loaded up but Cassidy rolls into the corner and chills for a bit, much to Lethal’s annoyance. Cassidy’s knee is ok enough to get up top for a super DDT, followed by the tornado DDT for two. Beach Break gets the same but Lethal kicks the knee out and hits Lethal Injection for the pin at 12:14.

Post match Sonjay Dutt and Satnam Singh come out with more threats to Cassidy’s leg. Dutt wants Wardlow out here so Wardlow makes the save. They aren’t fighting right now, but Dutt issues the challenge to Wardlow for Battle Of The Belts. Wardlow accepts, though Dutt said it was against “my man” and never said Lethal.

We look back at Hook winning the FTW Title last week.

Here is the returning Undisputed Elite for a chat. Adam Cole says his shoulder is still injured and he isn’t cleared to compete but you’re still looking at the most elite group in wrestling history. These are five of the most talented stars of all time and they are a team because they are loyal.

Unfortunately he can’t be in the Trios Titles tournament, and that means the Young Bucks can’t be either. The Bucks don’t buy that, but Bobby Fish and Kyle O’Reilly jump the Bucks from behind. The beatdown is on, including chairs being brought in. Hangman Page (with butterflies on his jeans) runs in with a lead pipe for the save. A Bucks/Page reunion is teased but it doesn’t quite click.

Jon Moxley is ready to destroy Chris Jericho because he likes blood and violence. Tonight, he’s ready for either Jericho or Wheeler Yuta to win because he’ll hurt either of them next week.

Christian Cage was backstage for an interview earlier when Jungle Boy tried to run him down.

Rebel is here with the villains. Rosa takes Baker down to start and shrugs off an early Lockjaw attempt. Hayter comes in and gets beaten up by Storm with Rosa coming in to keep up the pummeling. Back up and Hayter manages to knock her into the corner so Baker can come in and take over as we go to a break.

Back with Rosa hitting a Stunner to get herself out of trouble and handing it back to Storm for a high crossbody. Hayter reverses a double suplex into one of her own to put Storm and Rosa down, setting up a Stomp from Baker. Rosa dives in off the top with a nasty looking double stomp to make the save and everyone is down for a bit. Hayter plants Rosa but Storm and Rosa hit stereo German suplexes. Storm hits the running hip attacks in the corner but hits Rosa by mistake. One heck of a clothesline blasts Storm to give Hayter the pin at 12:01.

We get a video on Sammy Guevara and Tay Conti getting married but Eddie Kingston interrupts and says no one cares. Kingston has signed to face Guevara at All Out so check your mail and sign the deal.

Taz is fed up and officially ends Team Taz because he didn’t authorize any of that.

Running powerslam, clothesline, Jones is done with a kneeling on the chest pin at 51 seconds.

Post match Ricky Starks sprints to the ring and gets planted by Hobbs.

Miro wants time to know what he is going to do about the House Of Black.

Darby Allin warns Brody King that he might get what he asked for.

Christian hammers him in the corner to start and they fight outside, with Matt not being able to drive him through a table. Back in and Matt pulls him out of the corner for a powerbomb and a near fall but they head back to the floor. Christian drives him hard into the steps and we take a break.

Back with Matt slugging his way out of trouble but the Twist of Fate is blocked. Christian’s pendulum kick out of the corner rocks Hardy again and Matt gets knocked down for two. They head outside again with Christian putting him through a table, setting up the Killswitch for the pin at 11:02.

Post match Christian loads up the Conchairto but Luchasaurus’ music starts up. Cue Jungle Boy through the crowd to chase Christian off.

Daniel Garcia declares his win over Bryan Danielson to be the biggest in AEW history.

Ethan Page is in the ring to rant about why he isn’t on TV more and doesn’t have an action figure. He isn’t even on the truck despite being so much more talented. Cue Stokely Hathaway to offer Page a business card and they leave together.

The Jericho Appreciation Society is ready for Chris Jericho to become Le Champion again next week. Then Anna Jay chokes out a production worker.

Dumpster match. Before the match, the Acclaimed jumps the Club and Max Caster promises to make them retire like Vince McMahon. The brawl is on with the Club sending Acclaimed into the dumpster early, only to have Acclaimed come out with a cookie sheet for the escape. We take a break and come back with Bowens getting hit with Colt 45 on the stage. Colten goes up on part of the set with Caster popping up behind him. That means a toss into the dumpster, followed by the Mic Drop to put Austin through a table. The Club is dumpstered for the win at 8:04.

Post match the Acclaimed tie the dumpster shut and shove it off the stage ala the Outlaws to Mankind/Chainsaw Charlie in 1998.

Non-title and Jericho’s title shot next week is on the line. The Appreciation Society is here so Claudio Castagnoli comes out to even things up. They go out to the floor to start with Yuta taking over and knocking Jericho around the ring. The Society tries to interfere and gets ejected, leaving Yuta to wave goodbye to them. Yuta throws some rights but gets crotched on top as we take a break.

Back with Yuta making a comeback and hitting a top rope clothesline, only to have stereo crossbodies leave them both down. Yuta is up first and rolls some German suplexes for two. Jericho pulls him into the Walls but Yuta makes the rope, meaning Jericho needs to yell at the referee.

That’s enough for Jericho to be thrown outside for three straight suicide dives, only to dive into the Codebreaker for two back inside. Yuta is back up with a Regal Stretch to send Jericho to the ropes. The baseball bat is grabbed and taken away, allowing Jericho to kick Yuta low. The Walls is reversed into the seatbelt rollup for two, which is reversed into the Liontamer to make Yuta tap at 12:30.

Post match Jericho keeps the Walls on until Jon Moxley runs out for the save. Jericho says Moxley opened Pandora’s Box and we’ll be seeing Lionheart Chris Jericho next week. 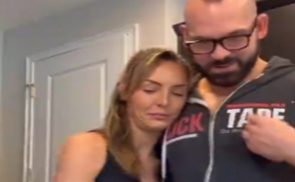 WATCH: Former WWE Stars Announce Pregnancy (This Is So Sweet)