We are in for a big night here as the AEW World Title is going to be defended for the first time as Chris Jericho defends against Darby Allin in a street fight. Odds are the winner will face Cody for the title at Full Gear so there is certainly a lot on the line. Other than that, we are likely to get more in the Tag Team Title tournament so let’s get to it.

It’s Christopher Daniels/Kazarian for SCU, meaning they are the two that the Lucha Bros jump from behind and lay out, including a piledriver on the ramp. Scorpio Sky runs out for the save and Daniels is taken out on a stretcher. Sky says he’ll take Daniels’ spot and throws some trainers’ tape around his wrist to get ready. Chuck and Kazarian start things off with the former taking over, allowing Trent to come in and hit a sliding knee to the face.

Sky comes in and gets his street shoe taken off and sent into the crowd, allowing Chuck to bite his toes. It’s back to Kazarian, who gets beaten up on the floor and superplexed for a bonus back inside. Kazarian kicks his way out of the corner as Sky comes in off the hot tag. Everything breaks down and Chuck misses a flip dive, landing on Trent by mistake. Kazarian’s slingshot hurricanrana drops Chuck and Sky hits the big flip dive, landing on his feet.

Sky gets back in and someone throws him his shoe back, followed by an assisted tornado DDT for two on Trent. Kazarian comes back in but gets caught with Soul Food. The big hug is broken up so Chuck knees Kazarian down and NOW we get the hug. A Doomsday knee gets two more on Kazarian but he’s fine enough to counter a piledriver on the apron. Back in and a powerbomb into a Backstabber, or at least what is supposed to be a Backstabber but wound up being more of a dropkick to the head, for the pin at 9:58.

Santana kicks Silver in the head to start and it’s Ortiz coming in as the beatdown is on in a hurry. Santana beats up Reynolds on the floor as Ortiz doesn’t seem worried by Silver inside. The Street Sweeper (sitout powerbomb/Blockbuster combination) finishes Silver at 2:02.

Post match Chris Jericho pops up on screen to say that’s why Santana and Ortiz are in the Inner Circle. The two of them want to beat up the Young Bucks so they’ll be facing off at Full Gear.

Video on Cody as he gets ready to challenge Jericho at Full Gear. This includes comments from Diamond Dallas Page, Brandi Rhodes, Jim Ross, Tony Schaivone and Michelle Rhodes, Dusty’s widow. Winning the title means a lot to him and it would validate everything he has done over the years. Page talks about how you need to win your first World Title, as apparently the NWA World Title doesn’t count anymore.

Baker is challenging. Feeling out process to start with Riho taking her down by the arm, only to have an armbar blocked. The Lockjaw doesn’t work either so Riho heads to the apron and slugs away, followed by a running dropkick to the head. A double stomp to the ribs keeps Baker down but the top rope double stomp misses.

Baker hits a Sling Blade and a TKO, followed by a low superkick for two more. Riho’s bridging northern lights suplex gets two more and it’s off to a half crab. Britt makes the rope so Riho hits some sliding knees for another two. Baker ripcord forearms her down though and Lockjaw is loaded up, only to have Riho reverse into a cradle to retain at 8:12.

We look back at the Lucha Bros attacking SCU.

It’s Jungle Boy/Marko Stunt here, with the latter replacing the injured Luchasaurus. Pentagon and Stunt start things off and Pentagon tells him CERO MIEDO. Stunt shoves him away and does the Floss Dance, which isn’t well received. Pentagon takes the glove off and throws it at Jungle Boy, so Pentagon bites the finger.

A toss into a hurricanrana drops Pentagon and everything breaks down in a hurry. Another toss into a DDT puts Fenix on the floor and Stunt hits the big suicide dive. Boy adds an Asai moonsault to Pentagon, who also takes a wheelbarrow suplex into a splash/legdrop combination for two back inside. Stunt hits a 619 into Boy’s German suplex for two but Pentagon finally gets back up with the superkicks.

Fenix comes in, only to get superkicked by Boy. That doesn’t go anywhere as Fenix starts the dives, leaving Stunt to take the Pentagon Driver for a rather close two. Pentagon yells at the referee and we take a break. Back with Stunt kicking Pentagon in the face and bringing in Boy as everything breaks down. A reverse powerslam into moonsault knees to Fenix gets two, followed by a running shooting star press for the same. Pentagon comes back in for the running Canadian Destroyer, followed by a swing around by the hair. Stunt’s arm is snapped and it’s the spike Fear Factor for the pin on Stunt as Fenix dives onto Boy at 11:24.

During the entrances, Moxley says you don’t write him off after one injury because he is still the top of the food chain. The fans give Omega a HAPPY BIRTHDAY chant before the match and it’s Omega jumping Moxley from behind to start things off. Moxley gets the better of it but Omega is right back with the jumping Fameasser from behind. Pac gets in a cheap shot though and the villains take over.

That doesn’t last long as Omega gets over for the tag to Page, who stars fast with the clotheslines. A top rope version looks to set up the Deadeye but Moxley makes it to the ropes. That’s fine with Page, who goes up but gets shoved down onto the apron thanks to a Pac distraction. Back from a break with Moxley grabbing a Texas Cloverleaf on Page, drawing Omega in for the fast save. A discus lariat drops Moxley and the hot tag brings in Omega for the house cleaning.

The Regal roll into the middle rope moonsault hits Pac and it’s a Snapdragon to both Pac and Moxley. The running flip dive takes Pac down on the floor but Moxley suicide dives both of them. Page moonsaults from the top onto Moxley and Pac so Omega can take Moxley back inside. A buckle bomb into a discus forearm into a Sky High gets two as Pac has to make a save.

Moxley hits a swinging Boss Man Slam to Page but gets his head knocked off by Omega. Pac’s slingshot cutter plants Omega but it’s a nasty suicide dive from Page to drive Pac into the barricade. We get the big showdown into the forearm off from Moxley and Omega and a V Trigger rocks Moxley. He’s fine enough to blast Omega with a clothesline though and they’re both down.

And now, with the wrestling being covered, it’s time for a barbed wire broom for Omega and a barbed wire bat for Moxley. The referee gets sent outside and it’s Moxley hitting Omega in the ribs with the non barbed wire part of the bat. Pac yells at Moxley and gets dropped with the Paradigm Shift. Moxley leaves and it’s a Buckshot Lariat into the V Trigger from Omega. Deadeye finishes Pac at 15:04.

Street fight with Allin challenging and skateboarding to the ring. Jericho is in Painmaker mode this week but Allin takes him straight down and hammers away. The champ gets sent outside for the suicide dive but Jericho takes over back inside. The confidence starts to come up, even as the fans chant for Allin. Jericho sends him hard into the post and Allin comes up holding his knee as we take a break.

Back with Jericho beating and choking with a kendo stick but the middle rope stick shot is knocked out of the air. That means Allin can unload with his own stick shots but has to get out of a Walls attempt. The referee counts to five, though I’m not sure why that would matter here. Allin uses Jericho’s argument with the referee to hit a high crossbody for two but Jericho knocks him down again.

A chair is brought in but Allin grabs a quick Stunner for two instead. Allin has to get to the ropes to get out of the Walls again so Jericho duct tapes Allin’s wrists together. Just because he can, Allin hits a moonsault press onto Jericho, followed by a suicide flip dive to the floor.

Back in and something like a Whisper in the Wind (again with the hands taped) gets two on Jericho, who clotheslines the heck out of Allin. Jericho has had it and tiger bombs Allin onto the skateboard for two, without much energy on the kickout. Allin dropkicks the chair into Jericho’s face and loads up the Coffin Drop, only to have Jake Hager come in for the save. The Walls retains the title at 15:45.

The Inner Circle comes out to celebrate with a little bit of the bubbly to end the show. 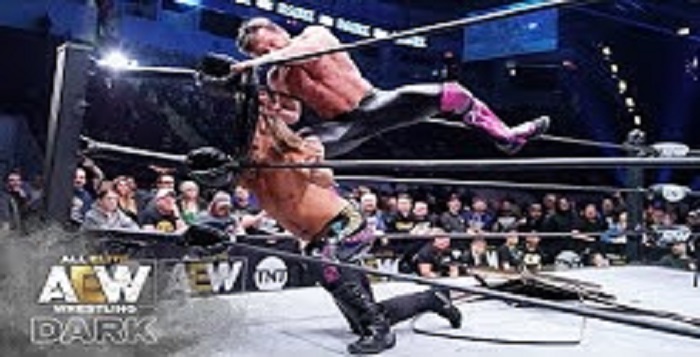