We’re rapidly approaching Fyter Fest and the card is starting to come together. With so much taking place over the course of the two weeks, we should be in for some rapid fire building and that could make for some entertaining shows. Tonight includes almost a mini tournament to set up the Tag Team Title match at Fyter Fest and that could be good stuff. Let’s get to it.

Omega and Page are defending. Dustin starts with Omega and has to escape an early One Winged Angel attempt. Omega sends him into the corner and tried to jump over but knees Dustin in the head by mistake. It’s off to Marshall for a dropkick on Page but he gets taken into the corner. Omega comes back in with a springboard ax handle to the ribs, only to have Marshall muscle him up with a suplex.

That’s enough for the tag to Dustin and the pace picks up, only to have Omega hit the Kitaro Crusher for two. Omega brings Page back in for a basement clothesline to Marshall, setting up the middle rope moonsault to give Page two. Marshall knocks him back though and the hot tag brings in Dustin to start cleaning house again. Everything breaks down and the champs are sent outside.

Dustin hits a flip dive off the apron and Marshall adds a flip dive of his own to Omega. Back in and Omega blocks the cutter and hits the snapdragon on Marshall. Dustin hits the Canadian Destroyer on Omega but Page is there with the non-Buckshot lariat. Marshall grabs the cutter on Page to put everyone down. Cue Allie to cheer Marshall on but it’s Omega forearming Marshall and throwing him into a German suplex from Page. Dustin is sent to the floor for a dive from Page and the V Trigger gives Omega two on Marshall. The Last Call drops Marshall and the Last Call retains the titles at 12:48.

Video on Anna Jay, the Star of the show.

Abadon crawls to the ring (note from Britt Baker: “This girl needs to find Jesus.”) and knees away in the corner before choking on the ropes. A hurricanrana driver finishes Jay at 1:14.

Post match here’s the Dark Order with Brodie Lee pointing some members to the ring and having Evil Uno hand Colt Cabana, at ringside, an envelope with a document inside. The rest of the team helps Jay out of the ring and she leaves with them as Cabana reads the papers.

Austin Gunn and Wardlow are the seconds (and Billy towers over Wardlow). MJF bails to the floor to start so Billy hammers away as he comes back inside. A big boot misses so Billy tries again and connects this time for two. That’s enough to send MJF bailing up the ramp but Billy brings him back. A throat snap across the top rope doesn’t work for some reason and MJF busts out a Fargo Strut. Billy gets in a few more shots but MJF takes him down as we hit the break.

Back with MJF working on the leg but walking into a tilt-a-whirl slam. MJF goes right back to the leg and puts on a reverse Figure Four. Aubrey Edwards catches him grabbing the ropes and physically breaks it up so MJF yells at her to no avail. MJF kicks him in the leg and tries a Fameasser, only to get backflipped off. Billy’s Fameasser connects but also draws Wardlow to the apron. The distraction lets Wardlow slip MJF the ring and that’s enough for the pin at 10:04.

Post match MJF goes after Jungle Boy at ringside and the wrestlers stream over the barricade for the big brawl.

Le Sex Gods are ready to become #1 contenders because they’re closer than best friends. They’re brothers, and blood is thicker than water. Or orange juice, and they beat Orange Cassidy to a bloody pulp.

Tony Schiavone interviews Britt Baker and mentions that Hikaru Shida will defend the Women’s Title at Fyter Fest. Baker doesn’t like being interviewed for this so she and Tony are ON A FRIENDSHIP TIMEOUT! She orders Rebel to drive but Big Swole is driving the golf cart and kidnaps Baker.

Cody, with Arn Anderson, is defending against someone from outside of AEW and it’s….a promo from Cody first. He’s out here looking for a challenger and wants the best competition. Someone pops up on screen and it’s……former NWA TV Champion Ricky Starks, who says he has the same grit and work ethic as Cody. After the Big Match Intros, Cody shoulders him down to start but Starks nips up.

Starks slugs away but walks into a dropkick. A shot that looks pretty close to a low blow sends Starks outside and a suicide dive takes him down again. Starks drops him ribs first over the ropes though as Jake Hager is watching from backstage. Anderson offers a quick distraction and it’s time to strike it out. Starks takes him down but can’t hit a tornado DDT. Instead, Cody hits a boot to the face and the scoop powerslam.

Cross Rhodes is countered so Cody hits a gordbuster for two instead. Cody heads up top but Starks catches him with a top rope superplex. Back up and Starks’ running crossbody puts both of them on the floor for another breather. They head back inside for a slugout until Starks hits a spear for two. They go to a pinfall reversal sequence until Cody ducks a clothesline and grabs Cross Rhodes to retain at 8:32.

The referee finds some pliers on Jimmy Havoc but leaves the in the corner. Matt starts for the Bucks so Havoc goes straight for his taped up ribs. The Bucks fight back in a hurry as is their custom, setting up stereo slingshot dives to the floor. After a glare from Butcher and the Blade (all in white for a change), the Bucks sucker Sabian into the corner and knock him into the corner.

Havoc comes in and gets caught in a running flip neckbreaker into a backbreaker but Butcher and Blade jump the barricade. The distraction lets Havoc get in a shot to Matt’s ribs and the villains take over. Back from a break with Matt getting beaten up in the corner as FTR comes out to watch. Sabian adds a penalty kick to the ribs (which he declares wide) but Matt counters a super hurricanrana into a super sitout powerbomb.

The hot tag brings in Nick to clean house and the Sharpshooter has Sabian in trouble. Havoc tries to bring in a mallet allowing Penelope Ford to hit Nick with a wet floor sign. Havoc’s Sing the Sorrow gets two with Matt making the save so Sabian hits a springboard DDT for two of his own. Everything breaks down and Risky Business (springboard 450/standing moonsault combination) gets two on Havoc.

The Butcher and Blade offer a distraction but get stared down by FTR. Sabian’s top rope double stomp hits Matt with Nick making the save, allowing Matt to northern lights suplex both of them at once. The Bucks put Havoc upside down in Sabian’s arms and then superkick Sabian’s knees to make him Tombstone his partner. Double knees to the face finish Sabian at 15:22.

Taz and Brian Cage are outside with Taz ranting about how Jon Moxley was ranting and raving about being miserable. That was Taz’s gimmick twenty years ago and now Cage doesn’t know if he wants to drop Moxley on his head or take the title.

Jon Moxley is in this business because he has demons and fighting holds them back. So Cage, beat him if you can, and survive if you can hang in the deep water.

We run down next week/Fyter Fest.

Rebel is searching for Baker, and finds her in a dumpster. Baker yells about it being five hours and ignores Rebel saying it was just one. Baker wants to know where Schiavone is and says he should be here, timeout or no timeout. Rebele sends out an Instagram because fans will want to see Baker being saved. Baker: “So I’m a damsel in distress???” She swears that Swole will pay for this, meaning fines and lawsuits. Now get her out of here!

The winners face Omega and Page at Fyter Fest for the titles and there’s no Orange Cassidy after last week. Matt Hardy is on commentary as Sammy sings Judas during the entrance. It’s a brawl to start with Chuck taking Jericho to the floor for some early choking. A water bottle to the eye makes it worse for Jericho as Trent spears Sammy down. Back in and Chuck stomps on Jericho in the corner but Sammy comes in for a fast dropkick.

The chinlock doesn’t last long so it’s back to Jericho for a hard clothesline. The Lionsault misses though and Jericho tweaks his knee, meaning the tag to Sammy goes through in a hurry. Trent comes in to chop away but Jericho gets in a bat shot to the ribs. Back from a break with Jericho flipping Trent over the top to crash on the mat, meaning it’s time for the pose from Le Sex Gods.

The delay allows the hot tag to Chuck, who hits a powerbomb with Jericho making a fast save. That earns Jericho a trip to the floor, followed by Soul Food into a half and half suplex. The hug is loaded up but Jericho decks Trent and Sammy takes Chuck to the floor. Jericho grabs the Walls on Trent, who crawls over to the rope for the break. Back up and Trent crotches Sammy on top (Sammy: “Oh my Spanish god.”) and it’s Chuck coming over for the assisted superplex.

Jericho makes his own save and throws Chuck over the barricade. The distraction lets Sammy hit Trent with the bat, setting up the shooting star press for two. As ridiculous of a kickout as that was, commentary does cover it by saying Sammy pulled back too far. The cameraman trips Sammy though and Strong Zero finishes Sammy at 16:02.

Post match the cameraman is in fact Orange Cassidy to wreck Jericho. House is cleaned and Tony announces Cassidy vs. Jericho for Fyter Fest. 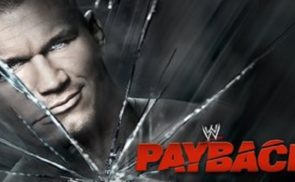