It’s another huge show with Fight For The Fallen. The card is stacked again, including the IWGP US Title, the ten man elimination match, and the mainstream debut of Nick Gage. The latter is going to get the most attention for the sake of freak show appeal, which may or may not be a disaster. Let’s get to it.

We get a video on what it means to be a cowboy, which seems to mean being loyal to your friends and ready to fight.

Omega and company looked scared of facing Page, the Elite has a full on Space Jam theme, complete with music, basketballs and Elite Squad jerseys in a sponsored entrance.  Anderson and Page start but everything breaks down in a hurry, with a superplex from the top taking down the pile on the floor.

Back in and the Good Brothers get caught in the corner until a Stunner/running clothesline combination gets two on Anderson. A rollup with trunks gets rid of Alex Reynolds at 3:53. The rest of the Dark Order and Page surround Anderson and a quick Fatality evens things up at 4:50. We take a break and come back with Grayson enziguring Gallows with Omega having to make a save. A bunch of people go outside and Grayson tries a Skytwister Press to take everyone down, though they didn’t exactly catch him. Gallows kicks Grayson over the barricade but gets taken down as both guys are counted out at 11:15.

Back in and Uno’s Downward Spiral gets two on Omega but the Swanton only hits knees. The V Trigger into the One Winged Angel gets rid of Uno at 12:30, leaving us with Page/Silver vs. Omega/Young Bucks. Silver spears Matt and hammers away until Matt pokes him in the eye. A bulldog plants Silver again and a leg lariat drops him as well as we take a break. Back with Silver getting to clean house until Omega is back in to take him down.

Silver is sent outside as the basketball goal is loaded up. The Indytaker, with a missed dunk, plants Silver on the floor and the academic pin gets rid of him at 19:05. Page is left on his own and Omega takes off the jersey to make it serious. They slug it out until a V Trigger into a pair of superkicks rock Page. There’s the Snapdragon into a triple superkick for two. Page gets draped in the ropes for the 450 but he is back with a double clothesline to the Bucks.

The moonsault onto the floor takes out all of the Elite and Nick is grabbing his knee. Back in and the Buckshot Lariat is broken up, as is the Indytaker. A double Buckshot Lariat gets rid of Matt at 23:58 so Omega grabs the belt. That’s countered into the Deadeye for two but Nick grabs the leg so Omega can get in the belt shot….for two. A pair of V Triggers get two and the One Winged Angel finishes Page at 25:37.

Pac isn’t worried about the Lucha Bros not being here so here are Chavo Guerrero, Andrade and the interpreter to say the Bros are coming in a limo. Chavo explains the idea of a limo and Andrade says (I think) that they better be ready to fight.

Taz introduces Ricky Starks for his FTW Championship Celebration. A band plays Starks to the ring, where he talks about how worthless Brian Cage has been. Cage never even checked on him when he had a broken neck because Cage is a selfish guy. Starks is a star, which Cage didn’t figure out in seventeen years. Cue Cage to beat up the band and chase Starks off.

Hiroshi Tanahashi wants to be the IWGP US Champion and is challenging the winner of tonight’s match.

Konnan and Tully Blanchard are at ringside. Ortiz and Wheeler feel each other out to start until it’s off to Santana and Harwood for the slugout. A few Amigos give Santana two and everything breaks down, with a powerbomb/neckbreaker combination dropping Harwood. We take a break and come back with Ortiz getting the tag to clean house, including a powerbomb to Harwood out of the corner.

An O’Connor roll gets two on Harwood but the kickout sends Ortiz onto Wheeler on the floor. Back in and a powerbomb into a frog splash gets two on Harwood. A forearm just angers Santana, who snaps off a German suplex. Everything breaks down and Wheeler springboard tornado DDTs Ortiz. Santana powerbombs Harwood for two and they’re both down.

Back up and Harwood superplexes Ortiz, who reverses the landing into a small package for two. As the cover goes down, you can see Wheeler grabbing his arm and walking towards the back, which does not seem to be a good sign. Harwood is back up with a kick to the ribs and the brainbuster to finish Ortiz at 11:05.

Post match Harwood goes over to check on Wheeler, who is surrounded by medics and is bleeding from the arm.

Britt Baker knows Nyla Rose is tough but she made Rose tap out last week with a broken wrist. She’s awesome, because she’s Britt Baker DMD.

Tony Schiavone announces that the second Rampage (August 20) will take place in the United Center in Chicago for the First Dance. Fans: “CM PUNK!”

Darby Allin says he’ll be in Chicago. He has heard people talking about being the greatest, and you can prove that in AEW. Come prove that you are the…..best in the world.

Hikuleo is challenging and has his father, Haku, in his corner. Archer hammers away on the taller Hikuleo but gets clotheslined out to the floor. We take a break and come back with Archer in trouble after Haku used the Tongan Death Grip during the break. Archer fights back with the Old School moonsault to rock Hikuleo again. A top rope superplex connects for two, setting up the Blackout to retain at 7:14.

Cody Rhodes is in the back for an interview but Malakai Black jumps him from behind. They fight into the arena with Black kicking him in the face. Some other wrestlers come out to check on him but Black kicks Fuego del Sol out as well.

Miro is ready for next week’s open challenge for the TNT Title, but no one is going to be taking the title from him. He is blessed with this title and a double joined wife, so come get it.

That would be Angelico/Private Party for the Office, the rest of whom is at ringside along with Marko Stunt. Boy and Angelico start things off with Angelico sending him outside. Hardy hits him in the face, so Christian and Stunt chase Hardy to the back. That leaves it 3-2 so Boy brings in Luchasaurus to clean house. Private Party flips out of a double chokeslam but Christian is back…and gets kicked outside. Boy dives onto Angelico and Kassidy, leaving Quen to get chokeslammed. Christian’s frog splash is good for the pin at 4:41.

Post match, the Blade sneaks in to deck Christian with the brass knuckles.

Big reaction for Rosa in her first match as an official member of the roster. Rosa takes her down with ease to start but Hart pops up to wave at the fans. That earns her another takedown, meaning Hart needs a rope break. A running clothesline knocks Hart down in the corner and the slingshot knees make it worse. Rosa misses a charge but is fine enough to grab a kneebar. Hart makes the rope again so it’s a Fire Thunder Driver to give Rosa the pin at 4:02.

Jon Moxley talks about how everything changed when he lost the IWGP US Title last week. No one seems to be caring about him anymore, but no matter because he wants Hiroshi Tanahashi. Moxley will be waiting on the other side of the Forbidden Door.

No rules and Jericho is the Painmaker. MJF, with popcorn, joins commentary. Gage wastes no time in cutting Jericho’s arm open with the pizza cutter and the slugout is on. A spinebuster puts Jericho down and they head outside to slug it out. Back in and Gage hits a superplex, followed by a Falcon Arrow for two. Jericho gets the Walls out of nowhere so Gage grabs the rope….which has no effect so he has to crawl out of the ring to escape instead.

They go outside with Gage grabbing the light tubes but Jericho has Floyd the baseball bat. Jericho bats him down but Gage hits a chokebreaker. The pizza cutter is out again and Jericho’s head is carved up. We take a break and come back with Gage bridging a pane of glass between two chairs. The Vader Bomb takes too long though and Jericho hurricanranas him through the glass for two instead.

The Codebreaker is countered into a spinebuster onto the glass and Jericho screams a lot. Back to back light tube shots have Jericho in trouble and it’s time to stab Jericho in the head with the broken tubes. Gage grabs another one, but Jericho hits him with the mist. Tubes to the head rock Gage and the Judas Effect gives Jericho the pin at 12:45.

Post match MJF says that the next labor is going to involve Jericho hitting a move off the top. We see a clip of Jericho and MJF arguing in 2019, with Juventud Guerrera being referenced. Next week it’s Jericho vs. Guerrera, in Guerrera’s first appearance on TNT in fifteen years. 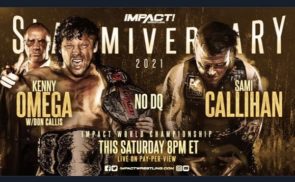 REVIEW: Slammiversary 2021: What They Do Well