Things were pretty good last week and hopefully that means AEW has some momentum coming into this week. I’m not sure what that is going to mean this time around but we’re rapidly approaching Revolution next month. That show could use a card so maybe we can get some more this time around. Let’s get to it.

Matt knocks Evans down to start and Page’s running shooting star press gets two. The BK Bomb puts Hardy in trouble and Evans snaps his throat across the top. Angelico spins over into a rollup for two and he slaps on a front facelock to drag Matt back into the corner. Matt avoids a handspring elbow and the hot tag brings in Page to clean house, including a Ron Simmons spinebuster to Angelico.

Page powerbombs Angelico and the powerbombs a diving Evans out of the air onto Angelico for a scary landing. The Buckshot Lariat is loaded up but Matt tags himself in, meaning it’s a backbreaker/neckbreaker combination for two. A Downward Spiral into a Phoenix splash gets two more but Page Buckshot Lariats both of them at once. The Twist of Fate finishes Angelico at 7:05.

Post match Matt says he’s glad Page signed with him for 30% of Page’s money. Page breaks the news, saying that Matt should have read the contract. Matt sent it straight tot he lawyer, but here’s the Jacksonville Jaguars’ mascot with a copy of what Matt signed last week. The contract says they’ll be facing each other at Revolution. If Matt loses, Page gets 100% of Matt’s earnings from the first quarter of 2021. Matt: “YOU’RE NOTHING BUT A CARNY! I CAN’T BELIEVE YOU BAMBOOZLED ME!”

Matt wants Page’s first quarter earnings up as well and Page shakes on it. The Jaguars’ mascot kicks Page low and it’s Isaiah Kassidy. Matt offers the Hybrid 2 $3,700 to to beat up Matt Hardy so the beatdown is on, but Negative One sends out the Dark Order for the save. Matt has to duck the Buckshot Lariat and runs off. Page gives the Dark Order a thankful look.

Santana and Ortiz are ready for their first Tag Team Title shot because it’s time for the Young Bucks to pay their dues. MJF says of course he wasn’t recording Sammy Guevara last week when there was already a cameraman in the room with the. Chris Jericho doesn’t want to hear it because MJF goaded Sammy into quitting the Inner Circle. The rest of it is Sammy’s fault though and now Sammy has made the dumbest decision of all. Sammy is now dead to him and Jericho never wants to hear that name again. Tonight it’s about bringing gold back to the Inner Circle so let’s go win some championships.

We recap some of the first round of the Japanese half of the #1 contenders tournament for the Women’s Title.

Non-title and Deeb has a bad knee coming in. They go the mat to start with Deeb going after the knee in a logical move. That’s broken up and hit the test of strength, with Riho being bridged down and staying up as Deeb lands on her. A shoulder puts Riho down but she’s back up with a cartwheel into a crossbody for two. Riho’s 619 is blocked and a catapult sends her throat first into the bottom rope. We take a break and come back with Riho fighting out of a crossarm choke and snapping off a dragon suplex.

Riho goes up but gets caught coming off the top, allowing Deeb to snap off a dragon screw legwhip out of the corner. A swinging neckbreaker gets two on Riho but she knocks Deeb into the ropes for the 619. Riho’s top rope double stomp to the back gets two but Deeb is right back with a Stretch Muffler. That’s reversed into a rollup for two, followed by a northern lights suplex for two more. The top rope double stomp gets another near fall and they go to a pinfall reversal sequence with Riho rolling her up for the pin at 14:46.

We look at Jade Cargill and Shaquille O’Neal training for their mixed tag by playing basketball.

Serpentico and Chuck Taylor are at ringside and get in a fight at the bell. Luther hits a pump kick to knock Cassidy to the apron, where Cassidy powerbombs him to the floor. Back in and Chuck Awful Waffles Serpentico (you knew JR is all over that one), leaving Cassidy to hit the Orange Punch for the pin at 1:53.

We recap Team Taz putting Darby Allin in a body bag and dragging him around the parking lot in a car last week.

Here’s Team Taz to call out Sting and he’s right there for them. They don’t like the bat so Sting throws it away, meaning the beatdown is on. Brian Cage powerbombs the heck out of him.

Eddie Kingston wants to get rid of Rey Fenix, but he needs to get rid of Jon Moxley. Pills, drinking and women haven’t done it, so it has to be beating Moxley once and for all, old friend.

JR sends us to a segment from earlier today with “the WWE Champion Kenny Omega.” Kenny, with Don Callis, was at a school earlier today and read the Young Bucks book to a bunch of kids. Kid after looking at the book cover: “Are they in love?” Kenny: “Uh, well they’re brothers so they love each other very much.” Kenny reads a passage about how he boosted business in the Tokyo Dome and they have to leave. They’re rather pleased with the publicity this will get but a kid wants them to stay. Callis says they can’t, but they can play with Michael Nakazawa. The kids beat Nakazawa up.

Santana and Ortiz (with most of the Inner Circle) are challenging and Santana armdrags Nick down to start. Matt comes in and hammers away in the corner, only to get caught in a double team backbreaker. MJF comes up on the apron to go after Matt but the referee catches him and ejects the entire team.

We take a break and come back with Matt hitting a top rope twisting Stunner on Santana. An Iconoclasm into a sitout powerbomb gets two but Ortiz is back with a super Falcon Arrow for the same on Matt. Ortiz gets Nick in a Koji Clutch but Matt makes the save with a top rope elbow. The Bucks send Ortiz outside and the Doomsday Device gets two on Santana.

The buckle bomb into an enziguri sets up the double superkick for two with Ortiz having to make another save. Santana ducks the BTE Trigger though and rolls Ortiz over for a double Stunner on Matt. The Street Sweeper gets two on Nick with Matt having to make a last second save. Santana powerbombs Matt over the barricade into the crowd but Nick grabs a small package for the pin to retain at 13:07.

Post match the Inner Circle comes back in for the beatdown as Don Callis, Kenny Omega and the Good Brothers watch backstage. Brandon Cutler comes in for the failed save, leaving Jericho and MJF to put their holds on the Bucks for the taps. The Brothers make the very slow motion saves. The Bucks’ parents are in the crowd and the dad shoves Jericho.

Cody and Brandi Rhodes reveal the gender of their baby. It’s a girl.

Cody is on commentary and announces a ladder match for the #1 contendership to the TNT Title. As we see Dory Funk Jr. in the crowd, Mike gets knocked into the corner to start but Matt comes in for some rapid fire shots. Cash takes Mike’s head off for two though and we take a break.

Back with Matt fighting back, only to have a tornado DDT countered into a powerbomb. A dragon suplex gets two on Matt with Mike having to make a save. Matt cleans house, including the top rope Meteora. Mike tries to come in off the top with…..something but he slips a bit and crashes onto Dax for two. FTR has had it with these guys and it’s the Big Rig for the pin on Mike at 8:56.

Post match FTR goes for the doctor’s medical bag so they can cut off Mike’s hair. The lights go out and we see a shot of Luchasaurus’ mask. They come back up and it’s Jurassic Express to clean house.

Here’s what’s coming next week, in two weeks, and at Revolution.

Jon Moxley keeps hearing about Eddie Kingston’s problems. After everything they have put each other through, Moxley is the only person who still cares about him. Moxley has a lot of things to look forward to, including February 26 when he tries to break Kenta’s neck. Then it’s time for Revolution when he takes the AEW World Title back from Kenny Omega. Kenny can’t run and the time is just about here, because it’s time to pull the trigger.

Jake Roberts and the Bunny are here too. It’s a brawl to start with everyone fighting on the floor. Moxley gets caught in the corner for some running splashes but a neckbreaker gets him out of trouble. Archer comes in for some suplexes to Blade but Butcher tries to break up the rope walk. Fenix makes a save of his own and Archer takes Blade down anyway so we can take a break.

Back with Butcher chopping Archer in the corner and Blade bites him in the forehead for a bonus. Moxley gets tired of waiting on the apron and clotheslines Blade out to the floor. Archer crossbodies Butcher and Eddie at the same time and brings Fenix in to pick the pace way up. One heck of a running dive takes out Blade the and the rolling cutter hits Butcher. The Eddie Guerrero dance sets up a frog splash for two but Kingston cuts Fenix off with an exploder suplex.

Everything breaks down and we get the parade of knockdowns until Moxley and Kingston start the slugout. Fenix kicks Kingston in the back of the head and Moxley slaps on the bulldog choke until Blade makes the save. Archer hits a running flip dive to the floor to take out Butcher and Blade, leaving Moxley and Kingston to slug it out again. Kingston hits a spinning backfist but Moxley hits a hard clothesline. The Paradigm Shift finishes Kingston at 11:58.

Post match the Good Brothers come in for the beatdown on Moxley and here are Omega and Moxley. Omega has a contract that gives Moxley a rematch for the title. The rematch is on at Revolution but Omega names the stipulation: an EXPLODING BARBED WIRE DEATHMATCH. Moxley headbutts Omega but gets V Triggered to end the show. 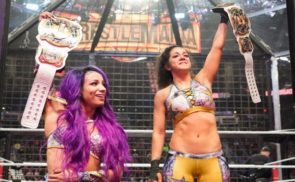 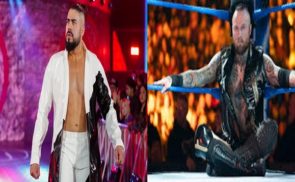