If you would like to see this show, you can check it out for free in full right here: 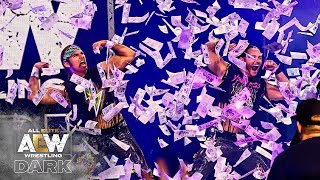 This show is starting to seem a little less important as we almost never see a big match around here anymore. That can pick up at any time though and that makes the show a lot easier to watch. However, I’m not sure how interesting this show is going to be week to week, which is an issue they might want to fix a little bit. Let’s get to it.

Tony and Dasha welcome us to a tag team edition of the show.

Dustin Rhodes is your special commentator this week.

Orange Cassidy is here with the Best Friends and Quen throws him some jewelry.  Quen and Trent slug it out and it’s quickly off to Chuck).  Chuck throws him into the corner with a suplex but it’s off to Isaiah to take over and hook the camel clutch, setting up the double stomp to the back.

Orange gets up on the apron to pose with the wrong team. The Best Friends come back in and Chuck hits Soul Food on Quen, setting up…..a bite to the boot? A Doomsday superplex gets two on Isaiah, freaking Dustin out because he wants to go to the party tonight (Dustin: “I know I’m 50 but I want to go to the party!”).

The tag brings Quen back in for a dropkick to Trent and a dive to Chuck. Another dive makes it even worse and a springboard crossbody gets two on Trent. A neckbreaker/Swanton combination gets two on Trent but it’s back to Chuck as everyone goes outside.

Chuck powerslams Quen onto the same and the knee gets two on Isaiah back inside. The tornado DDT is broken up and Silly String takes Chuck down. Quen dives onto Chuck on the floor and the shooting star press, say it with me, gets two. Gin and Juice misses with Quen getting stuck in the corner, allowing Chuck to powerbomb Isaiah into him in the corner. That sets up the BIG HUG and Strong Zero finishes Cassidy at 14:54.

Swole powers Riho into the corner to start so Riho headlocks her to the mat. The double stomp misses so it’s off to Baker vs. Stadtlander. A release gordbuster plants Baker and a dropkick to the knee gives Stadtlander two. Swole can’t get in a suplex so Baker is back with a Sling Blade for one.

We hit a neck crank on Swole but Baker avoids a lot superkick, only to take Swole down again. That’s enough to bring Riho back in but charges right into a superkick. Dustin can’t understand how Excalibur knows all these names as Riho sends Stadtlander down, allowing the tag back to Baker. Everything breaks down and Stadtlander throws Baker onto Riho for two.

We get Cody’s weekly sitdown interview, this time with Justin Roberts. He went from the low of being released from WWE to what he is now and people remembering him is something special to him.

We look back at MJF ranting about Cody trying to keep him underneath his thumb. Cody came out for the fight but Wardlow debuted to save MJF.

We see the brawl between the Young Bucks and Santana/Ortiz.

The highlights continue with a clip of Scorpio Sky pinning Chris Jericho to retain the World Title.  Jericho snapped as a result.

Nick headlocks T-Hawk to start so they take turns with shoulders. A dropkick takes T-Hawk down and Lindaman is kicked to the floor as well. T-Hawn is right back with a suplex though and Lindaman strikes away at Nick. Everything breaks down for a bit and it’s a series of strikes into an assisted suplex to drop Nick.

Lindaman hits a dive onto Nick but an enziguri gets Nick out of trouble. Matt comes in off the tag for the rotating suplexes but another German suplex puts Matt down. It’s back to Nick for the fast paced comeback, including the moonsault to the floor. The Meltzer Driver finishes Lindaman at 7:49.