It’s the first show after the very good Double Or Nothing and you know what that calls for: nearly an hour and a half of overly competitive jobber matches! I’m not sure if this is the new permanent norm or if they’re just burning off a bunch of material they taped on the off chance that they wouldn’t be able to tape for a good while. Either way, it’s hardly must see material. Let’s get to it.

Tazz makes it clear that he will not be getting into any details about his relationship with Brian Cage.

Jon Silver/Alex Reynolds here. The Nightmares snap off an early double Russian legsweep on Reynolds to start and Dustin adds the running knee lift. Cue Allie of all people, with Marshal’’s apple. Marshall certainly seems interested and Silver uses the distraction to get in a cheap shot and take over. Reynolds’ uppercut gives Silver two but Marshall tells him to go with the chest kicks. The big one is countered in a hurry so the hot tag brings in Dustin for the house cleaning. The snap powerslam plants Silver and Marshall adds a cutter for the pin at 5:02.

Cutler starts fast with a running forearm for an early two as Taz talks about Cutler’s losing streak. Nakazawa comes back with a spear but Cutler comes in from the apron with a kick to the head for his own near fall. Hold on though as Nakamura is out of oil, likely sending him into a downward spiral. Cutler keeps kicking away, despite having been busted open somewhere in there. The torture rack goes on and Nakazawa gets sent over the top. They fight on the floor and it’s Nakazawa sending him into the barricade for the first countout in AEW history at 6:20.

Post match here are the Librarians, with Peter Avalon saying this is proof Cutler is the worst wrestler in the world. Therefore, Cutler can go sit on commentary and watch Avalon pick up a win.

Boy grabs an early headlock takeover and we’re already in the technical material. An armdrag puts Avalon on the floor but the rest of Jurassic Express won’t let him leave. The distraction lets Avalon post him and it’s a suplex for two back inside. A leg lariat gives Avalon two more and we hit the headscissors. The moonsault misses though and Boy hits a hard clothesline.

Boy’s springboard tornado DDT gets two but Avalon is back with a Meteora to the back of the head for his own near fall. Leva Bates gets on the apron for the assistance but winds up on Luchasaurus’ shoulders. Cue Marko Stunt to kiss her, meaning Boy can grab a modified STF for the tap at 7:30.

Serpentico goes for the arm to start but Serpentico grabs a headlock. Some armdrags into the armbar put Serpentico down so he slugs away, only to walk into a leg lariat for two. Daniels hits a high collar suplex (Taz: “Thanks to him for stealing my gimmick.”) but Serpentico takes him down as well. A slingshot elbow gives Serpentico two but Daniels STOs him down. The release Rock Bottom into the BME gives Daniels the pin at 4:27.

Pearce knocks Kiss down to start but Kiss kicks him into the corner for the early tag to Janela. That means Pearce gets laid over the middle rope and gets caught with a front flip ax kick to the ribs from Kiss. Skyler offers a quick distraction though and Pearce gets in a kick to the face. Janela avoids a charge though and the hot tag brings in Kiss for the house cleaning. Everything breaks down and Kiss kicks Pearce through the ropes, setting up the suicide dive. Back in and Janela drops a top rope elbow to finish Skyler at 4:37.

Penelope Ford is here with Sabian and Havoc. Andre gets jumped before the bell but manages to dropkick Sabian into the corner for what is likely the highest level of success he should expect here. Havoc comes back in and walks into a spinning middle rope crossbody from Andre. Sabian is back in to stomp Andre down in the corner, leaving Havoc to bite the face. Ford gets in a cheap shot from the floor so Havoc’s running big boot can get two. A PK to the chest connects, though the referee said it was wide right.

The Acid Rainmaker misses though and (the bloody, from Havoc’s bite) Andre dives over for the hot tag to Donati. A hammerlock suplex gives Donati two on Sabian but he’s right back up with the hanging spinning neckbreaker. Sabian’s top rope double stomp sets up a dropkick/Michinoku Driver combination to finish Donati at 6:58.

MJF is here with Wardlow, who slams Grimm down and stomps away in the corner to start. A missed charge sends Wardlow into the post, but he easily counters a springboard into a German suplex. The F5 is broken up but this time the running shoulder connects in the corner. A knee to the face knocks Grim out at 2:59.

Post match Wardlow hits the F10 for a bonus.

They shake hands to start and fight over a wristlock with Johnson bailing into the corner. As the announcers debate if Tony Schiavone or Tony’s wife is the bigger heel, Cabana gets two off a quick rollup. Cabana cranks on the arms into some crucifixes for two each until Johnson makes the mistake of firing off a chop. Johnson dropkicks him in the back to knock Cabana into the corner, which just annoys him. The Flying Apple into the Bionic elbow into the Billy Goat’s Curse finishes Johnson at 3:43.

Sabian is here with Ford. King is a giant compared to Ford and grabs a headlock to start. Some standing switches don’t go anywhere so King runs her over with a shoulder. That lets King yell at Sabian, meaning Ford can get in a shot from behind. Stomping in the corner keeps King down and a suplex gives Ford two. Some choking doesn’t do much on King, who snaps off a dropkick. King misses a charge in the corner though and Ford hits a cutter for the pin at 4:53.

Orange Cassidy is here too. Taylor works on Dean’s arm to start and adds a dropkick for a bonus. Trent comes in for the double elbow and it’s off to Angels, who is taken to the mat in a hurry. A hard clothesline cuts off Angels’ comeback but a springboard dropkick sends Trent into the corner. Dean suplexes Angels into Trent in the corner for two but Trent gets in his own suplex. The hot tag brings in Chuck to pick up the pace, including sending Dean into a spear from Chuck. Angels gets powerbombed and the big hug sets up Strong Zero for the pin on Angels at 4:24. 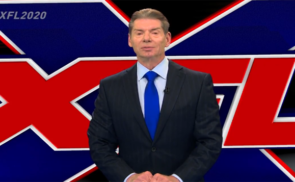