We’re back to this show and that means it’s time to mix up the group of jobbers to have occasionally competitive matches against the mid to upper midcard stars. That can be a good thing but it can also get repetitive. They’ve tied in some slight storyline advancement though and that helps a bit. Let’s get to it.

Anthony jumps him to start and gets powerbombed down. A superplex sets up the Drill Claw to give Cage the pin at 53 seconds.

Christopher Daniels/Kazarian here. Daniels and Musa start things off with an exchange of armdrags and it’s an early standoff. Musa’s powerslam gets two and it’s off to Ali for a butterfly suplex. Musa makes the mistake of going after Kazarian though and walks into the Blue Thunder Bomb from Daniels. Now it’s Kazarian coming in for a heck of a clothesline, plus the powerbomb/neckbreaker combination on Musa. The Best Meltzer Ever finishes Musa at 3:32.

Spears shoulders him down to start and walks around a lot, allowing Pete to get up. Pete fights out of a top wristlock and sends Spears outside for a consultation from Tully Blanchard. Back in and Spears hammers away in the corner, setting up a Blue Thunder Bomb for two. Tully has had it though and distracts the referee, allowing Spears to load up a foreign object in the black glove for the knockout shot at 4:59.

After Archer decks the production guy, Garrison hammers away to no avail. The Pounce takes Garrison down but he steps up to Archer in the corner. A hard slam gives Archer two and he shouts about how AEW has no idea what is coming for them. Some running shots in the corner set up the Blackout and the EBD Claw is good for the win at 3:41.

It’s Alex Reynolds/John Silver for the Order here. Reynolds uppercuts Janela to start but gets splashed and suplexed for one. Kiss comes in and gets knocked into the corner by Silver but pops back up with a hard right hand. Janela’s Russian legsweep into a backflip kick to the face from Kiss. Back up and Silver hits Janela so hard that he drops his mask, followed by a gorilla press into a cutter for two.

Reynolds grabs the chinlock but Janela fights up and ducks a shot in the corner, allowing the hot tag to Kiss. A running Downward Spiral gets two on Reynolds as everything breaks down. Janela is sent outside and Reynolds picks him up for a brainbuster, with Silver diving through the ropes to hit Janela at the same time. Janela comes back in with a double Blockbuster, plus a fireman’s carry to Reynolds. Kiss steps on Reynolds’ back and adds the splits splash to finish Silver at 7:42.

This is Mel’s (you might remember her from the Nightmare Collective) first match in several months. King applauds a bit to start but gets powered into the corner. Mel’s wristlock is countered but she blocks an armdrag with straight power. Mel tosses her down with ease and stomps away before kicking King in the head. A shot to the face gets King out of trouble though and she scores with the second armdrag attempt. King chops away against the ropes but misses the middle rope dropkick. Mel grabs a choke spinebuster for the pin at 5:28.

The go with the standing switches to start with Sky taking him to the mat into a front facelock. Back up and Sky holds onto the ropes as Johnson drops to the mat, setting up an Oklahoma roll for two. A dropkick puts Johnson down again and Sky drops some knees into the back. The backbreaker gets two but Sky misses an elbow and gets caught in the Blue Thunder Bomb gets two. Johnson misses a charge into the corner though and it’s a TKO to give Sky the pin at 4:58.

Caster shoves Stunt down to start and dances a bit so Stunt strikes away and hits a running knee to the chest. Some YES Kicks in the corner set up a running dropkick. Boy comes in to act as Stunt’s launchpad, plus to hit a running knee for two on Caster. Serpentico gets the tag and also gets a running hurricanrana from Boy for two more. Luther and Luchasaurus come in….and Luther tags straight back to Serpentico.

A wheelbarrow suplex plants Serpentico and it’s back to Boy, who is tossed at Luther for a Downward Spiral and two more. Express hits a trio of splashes for two on Caster with Luther making the save and pulling Caster into the corner. Luther comes in for a belly to belly on Stunt before running him over with a clothesline.

Caster is willing to come back in and gets kicked in the head almost immediately. That means Luchasaurus can come in and clean house, including the Extinction to Caster. Luther slams Stunt onto the cover for the break but then bails from the threat of Luchasaurus. Stunt, with some help, chokeslams Caster and Boy grabs an STF for the tap at 8:35.

The Best Friends don’t even bother to stick around for this one. Avalon takes Cassidy’s sunglasses to start and works on a headlock before taking him to the mat. The hands go into the pockets and Cassidy shimmies out of a waistlock. The no hands nip up lets Cassidy get the sunglasses back, but he is sent to the floor for some flirting with Leva Bates.

Avalon dropkicks him through the ropes and hits a slingshot dive, followed by some right hands inside. A leg lariat gives Avalon two and a butterfly suplex is good for the same. Cassidy is back with rams into all four buckles, causing Avalon to do a Curt Hennig bump out of the corner. The tornado DDT gets two on Avalon but he rolls through a high crossbody for two. Back up and a Superman Punch finishes Avalon at 5:45.

Quick Dynamite preview takes us out. 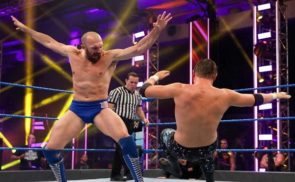 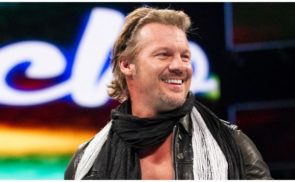 Chris Jericho Reveals His WWE Pay For One Night