That’s an unexpected source. Wrestling does not exactly get treated well by the mainstream sports world as it is not seen as a traditional sport. Due to being pre-determined, wrestling is seen as something closer to entertainment, making it harder and harder to get that much attention. It happens every now and then though, and that was the case for a strange reason this week.

Nia Jax is one of the most unique stars that WWE has ever seen. Her size and power make her one a dominant force in the women’s division and it makes a lot of sense that she is pushed as strongly as she has been over the years. Jax is also known for being outspoken and for getting her name out there for some of the things that she says. That happened again this week, though for a rather different reason.

Here’s where it all started. Check out everything that got people talking about Jax:

This week on Monday Night Raw, Jax faced Lana in a losing effort. Near the end of the match, Jax missed a legdrop on the apron and loudly shouted “MY HOLE!” The line has sparked all kinds of attention for Jax, including trending on Twitter and, according to Wrestlinginc.com, to an offer of a brand ambassadorship from a bidet company. Jax would go on to lose the match after Lana put her through a table.

I’ve been receiving a HOLE lotta love, much obliged #myhole

Dear @NiaJaxWWE is butt broken? I heard there was a crack in it. ? #myhole also… I think ? has a ? you can borrow!

I saw what transpired last night during Raw. My condolences to your…hole. That looked like it hurt. To help ease some of your pain, I’d like to send you a free TUSHY Spa 3.0 bidet to install. I imagine things are a bit tender up there right now, with lots of sensitive nerve endings. Wiping with dry tissue may irritate and damage the area further. With a TUSHY Spa 3.0 you can spray your bum with water. It’ll help it feel cleaner, fresher, and healthier in no time.

We can also send you a TUSHY Travel, a portable bidet, perfect for people who poop when they’re out and about to have on hand in case you need it and for as long as your pain persists.

Lastly, we’d love for you to be a TUSHY brand ambassador and speak to the many features our bidet offers athletes.

Let me know if you’re interested in a free TUSHY and TUSHY Travel and I’ll send one to you ASAP. Feel free to check out our assortment of products at www.hellotushy.com.

Opinion: This is the kind of thing that you can barely script, though the way it was focused on so heavily makes me think that it was planned by WWE in the first place. I’m not sure where this is going to go, but if it is anything close to what WWE tends to do with similar moments, we could be in for having this segment beaten over our head for a very long time to come. At least it should end the Jax vs. Lana feud once and for all. 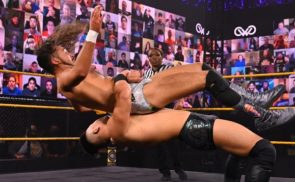