It’s weird to be looking forward to this show but they have managed to make it happen. I have no idea what to expect from the show but the mere hint of effort and a purpose has turned this show into something with a bit of value for a change. What’s next? An actual big name showing up around here? Let’s get to it.

Leon is new. Feroz and Cortez go to the mat to start with Feroz’s takedown not having any effect. It’s off to Leon for a very spinning wristdrag and Cortez’s missile dropkick gets two. Feroz has to fight out of a chinlock and Miller comes in for the first time, only to get clotheslined down. Everything breaks down and Miller cravates Leon onto her knee for the pin at 3:48.

Hudson runs Blade over to start and then tosses him outside with straight power. Back in and Blade cranks on a headlock but Hudson counters a dive into an overhead belly to belly. Some slams put Blade down again and Hudson is looking rather cocky. Blade hits a dropkick into a running corner clothesline but Hudson sends him flying again. The more serious Hudson puts him down and finishes by grabbing Blade by the back of the head and shoving him face first onto the mat at 5:31.

Feeling out process to start with Quinn grabbing a headlock until Rama sends him into the corner. A front facelock suplex gives Rama two and the armbar goes on. Back up and a hard whip sends Rama into the corner to give Quinn a breather. The armbar goes right back on, though this time Quinn muscles him up for a World’s Strongest Slam. Quinn is back up to toss Rama around, setting up a running shoulder in the corner. The running forearm finishes Rama at 4:15. 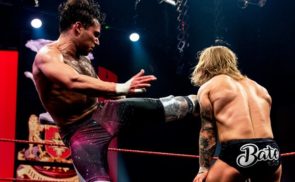