We’re back after another week off, which continues to not be a good sign for the show’s future. Then again that would suggest that anyone gave this show any kind of thought, which doesn’t seem to be the case around here. It’s time to get ready for next week’s Cruiserweight Title match, which happens to be taking place on NXT. Let’s get to it.

The opening recap looks at the triple threat match from the Survivor Series Kickoff Show, with Lio Rush retaining the Cruiserweight Title over Akira Tozawa and Kalisto, as well as Rush defeating Tozawa in a singles title match on NXT.

Daivari grabs a headlock to start and the fans are almost disturbing in their silence. A shoulder gives Daivari two and he tells someone to shut up. Mendoza springboards over him to set up a dropkick and even stops to talk some trash. A hurricanrana increases Daivari’s frustration and a top rope version makes it even worse.

Daivari bails to the floor so it’s the suicide dive to put him down again. Back in and Mendoza hits one of the loudest chops I can remember with Mendoza having to stop and shake his hand off a bit. Mendoza gets a bit too cocky though, allowing Daivari to shove him off the top. An elbow hits raised knee, which for some reason doesn’t hurt said knee, but Daivari grabs the chinlock a second later anyway.

That’s broken up as well but Mendoza gets sent hard into the corner to take him down again. The top rope splash misses though and they’re both down again. Mendoza makes his comeback with some clotheslines and hits a rope walk top rope dropkick. Daivari’s Rock Bottom gets two but Mendoza is back with a running kick to the chest. The hammerlock lariat misses and Mendoza kicks him in the face. Daivari has had it with him though and now it’s the hammerlock lariat to finish Mendoza at 9:58.

I remember the chop: 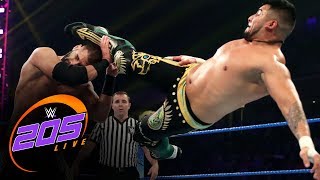 Jack Gallagher has been losing lately but he’s here to show why he’s one of the best around. He needs this, and doesn’t know what he’s going to do if he loses.

Burch gives us a clean break to start so Williams shoves him down. That earns himself a headlock and a grab of the leg blocks Williams’ leapfrog for a face first crash. A slam makes it worse for Williams as it’s completely one sided so far. Williams scores with a jumping knee to the face so Burch headbutts him into the corner. A German suplex into a hard clothesline sets up a top rope hanging DDT to finish Williams at 3:30.

Nice to meet both of you: 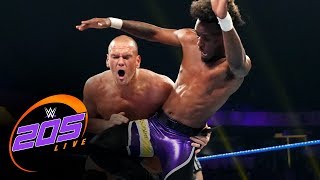 Akira Tozawa thanked Lio Rush after their match on Wednesday. Angel Garza came up and Rush had to be held back. The title is on the line again this week.

Gallagher blocks a reach for the pants and grabs a headlock, which sends Garza bailing to the floor. That means the tease of a high five to a fan so Gallagher catches him with a headlock takeover back inside. Back up and Gallagher does his handstand stop sign deal in the corner, followed by a kneeling backdrop (that’s a knee one). Garza is fine enough to tie Gallagher’s legs up in the ropes though and it’s a double dropkick to the thighs.

That means GARZA CAN TAKE OFF HIS PANTS before telling the fans to callate. A running shot to the back gets two on Gallagher and one to the ribs is good for the same. Garza dropkicks him for two more and we hit the camel clutch. That’s broken up and Gallagher hits a running forearm, setting up a crossbody for his own two. They head up top with Garza blocking a superplex attempt and dropkicking Gallagher out of the air for another near fall.

The Gentleman’s headbutt rocks Garza but he scores with a superkick to put both guys down. Back up and Gallagher just unloads with forearms to the back to get the fans into things but the Gentleman’s dropkick is blocked. The Lionsault is broken up as well though and Garza gets caught in the ropes for a missile dropkick. Now the Gentleman’s Dropkick can get two more thanks to a foot on the rope. Gallagher slaps on a guillotine with a bodyscissors but Garza slips out and grabs the Wing Clipper for the pin at 12:42.

Frustration is setting in: 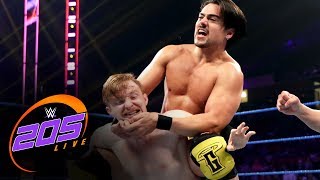 Post match Gallagher clears off the announcers’ table and throws a chair at the referee. Gallagher beats up security as well so Drake Maverick comes out to break it up. Drake suspends him and gets knocked down to end the show. 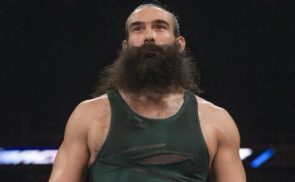 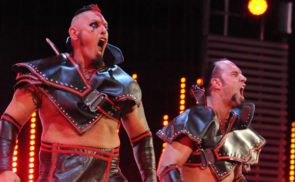