Yes it’s the first time that Jeremy Borash has gotten to host a show and I could go for more of that taking place. If nothing else, Tom Phillips could probably use a break as he is on almost every show these days. I’m not sure what we are going to be seeing this time, but opening the vault is always fun. Let’s get to it.

Tom introduces Jeremy and welcomes him to the team.

The subject this week is Oney Lorcan, who is working out in his back yard. Here’s our first match.

The J-Crown is a collection of 8 junior heavyweight titles from around the world collected into one title. Dragon currently holds the J-Crown but wants the Cruiserweight Title, held by Dean. Sonny Onoo, the evil Japanese representative, is now a regular evil manager, representing Dragon. The Dragon is a very solid wrestler from Japan while Malenko is a smaller guy but known as the Man of 1000 Holds. Mike Tenay, international wrestling expert, joins commentary for this one.

Dean takes it to the mat to start but Dragon sits out. Now Dean sits out as both guys fight for control. Ultimo finally gets control with a leg lock but Dean rolls away to the ropes. Dragon takes him right back down to the mat and puts on a quickly broken chinlock. They’re moving very quickly so far. Dragon nips out of a headscissors and we have a standoff. Dean is taken down again and Dragon fires off some HARD kicks to the back.

Dean takes him down with a backbreaker and puts on a headscissors as this is a chess match so far with both guys trying to get an extended advantage. Dragon hooks another chinlock but Dean is out of it almost immediately. The fans all chant USA as Dragon hits a jumping kick to take Dean down and it’s off to a modified STF. Malenko fights up again and we head outside where the Dragon slams him down. A suicide dive takes Malenko down but there’s no Asai Moonsault (it’s named after Dragon, its inventor).

Back inside and Dragon suplexes him down for two and Malenko gets the same off a sunset flip. Dragon hooks on a bow and arrow hold before shifting over to an abdominal stretch. The match has slowed WAY down and not in a good way. Tenay talks about Dragon’s name meaning that he’s the final student of Bruce Lee. Dragon would have been about seven years old when Lee died, so I’m thinking that’s not true.

Malenko fights up and hooks a quick release German suplex for two and it’s off to a leg bar by Dean. In a smart move, Dean lets go of the hold for a second so he can pull Ultimo back to the middle of the ring. Dragon finally makes it to the rope so Dean dropkicks him in the side of the knee to keep the pressure on. A kind of spinebuster puts Dragon back down and we hit another leg lock to keep Dean in control. Dean catches a charging Dragon in a WICKED powerslam to pop the crowd but for some reason there’s no cover. Dragon comes back with a spinwheel kick and a powerbomb for two.

Dean picks him up for a tombstone and the fans go nuts again. The Texas Cloverleaf (Malenko’s leg lock finisher) is escaped but a tiger bomb gets two instead. Dean is kicked to the floor and there’s the Asai Moonsault to put both guys down again. Back in and Ultimo misses a moonsault, allowing Dean to put on the Cloverleaf, only to break it to go after Onoo. A brainbuster gets two on Dragon but Ultimo escapes a suplex, leading to a pretty awesome pinfall reversal sequence, culminating with Dragon hitting a tiger suplex for the pin and the title at 18:30.

Lorcan is lifting his dog and throws us to his own match.

No DQ. It’s a brawl in the aisle before the bell with Daivari throwing Lorcan off the stage (for a rather short drop). Kendrick gets whipped hip first into the steps and Lorcan is brought inside for the opening bell and a near fall as Burch and Kendrick fight in the crowd. Lorcan throws Daivari over the barricade and into Kendrick, who is taken inside for a beating.

It’s Daivari coming in with a chair, only to get sent face first into said chair. Again: Daivari is not very good at….anything really. Burch tells Lorcan to get the table and they set one up at ringside. Kendrick saves Daivari from going through the table and sends Lorcan through it instead with a Death Valley Driver from the apron. Lorcan goes over the announcers’ table and Daivari throws in a ladder. Daivari is sent into the ladder though and he’s down again.

Kendrick Russian legsweeps Burch off the ladder and Daivari adds a splash off the ladder for two. Lorcan Hulks Up to slug it out with Kendrick but Daivari makes the save with the chair. A running Blockbuster sends Kendrick onto the chair and Burch duct tapes Kendrick to the turnbuckle. Daivari tales the assisted spike DDT onto (not through) the table. Another one inside finishes Daivari at 12:16.

Tom and Jeremy both pick Drake Maverick to win the Interim Cruiserweight Title tournament. Tom walks out to let Jeremy have the show to himself to wrap things up. 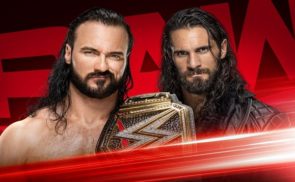 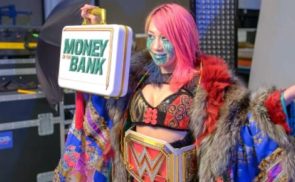