Last week was quite the change of pace as we had some fresh blood around here and they actually got some big wins. It was nice to see that for a change, though odds are it does not last. There is a good chance those things are knocked right back down to normal this week, though you never can tell. Let’s get to it.

Hale is better known as Anthony Henry. Daivari gets shoved out of the corner to start and Hale slaps on a headlock. Hale does it a second time to prove whatever point he’s going for but Daivari puts him on the middle rope instead. That means a diving headlock takeover so Daivari goes with a knee to the ribs this time instead. Back up and Hale hammers away, setting up a one footed dropkick for two. Daivari bails so Hale is right there with a running knee off the apron.

They head back inside with Daivari taking him down off a quick suplex and hammering away in the ropes. We hit the chinlock for a bit but Hale rises up thanks to the power of clapping. A scoop powerslam gives Hale two and some exploder suplexes put Daivari down a few more times. Hale enziguris him into a DDT for two but Daivari manages to crotch him on top. The Iconoclasm sets up the Persian Lion splash for two more and Daivari is stunned on the kickout. The hammerlock lariat is loaded up but Hale reverses into a bridging O’Connor roll for the pin at 8:19.

Bolly-Rise is sitting around a table and talking about the new names around 205 Live. Ever-Rise brings up their talk show and the Bollywood Boyz sound confused. They’ll watch this weekend though.

We look at Kushida retaining the Cruiserweight Title in a 2/3 falls match against Santos Escobar on NXT.

The fans want to know Daivari’s whereabouts as Nese works on the arm to start. Sterling reverses to do exactly the same and snaps off an anklescissors to put Nese in the corner. Back up and Sterling plants him again, with Nese bailing to the floor for a breather. Sterling gets pulled into the ring apron to put him in trouble for a change, followed by a whip into the barricade to make it worse.

Back in and Sterling manages an enziguri and a northern lariat to rock Nese again. You don’t do that to Nese though who hits a spinning kick to the face for two, setting up the bodyscissors. Nese picks him up and drives him into the corner, but a superplex is countered into a failed powerbomb attempt. Instead, Sterling hits a running hurricanrana to bring him back down and there’s a spinwheel kick to put him on the floor.

Back in and Nese catches him with a rolling palm strike but he misses a 450. Sterling hammers away again and gets two off a neckbreaker. Nese knees him in the face though and the sunset driver gets two. A powerbomb gives Sterling the same but he misses something off the top. The German suplex into the corner sets up the running Nese to give Nese the pin at 12:07. 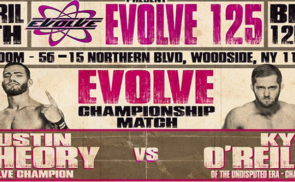