We’re still in the new version of the show here and that’s the kind of thing that 205 Live has been needing. It’s just a showcase show these days with no pressure or stories, but more importantly they don’t have the vanishing crowds or extended shows. It’s a good sign, even though the show is little more than filler on the Network. Let’s get to it.

Wilde goes with the hammerlock on the mat to start before switching over to the armbar. Scott is right back up and they trade headscissors to a standoff. Another headscissors sends Scott to the floor but he pulls the ring skirt aside to trap Wilde. Some kicks to the back set up some forearms to the face as Scott is a bit more aggressive this time. The chinlock sets up a Gory Stretch of all things, cranking the arms together rather hard.

Scott even leans down into a backslide for two but Wilde is fine enough to shove him off the top. A top rope hurricanrana sends Scott outside again, followed by a ram into the announcers’ table. Back in and Scott blocks a tornado DDT, setting up the slugout. Scott gets the better of things and hits the House Call for two, only to have Wilde get in a kick to the head. Wilde goes up top, only to get pulled down into a flipping slam (Quasto calls it a pop up Michinoku Driver) for the pin at 8:34.

We look at Jordan Devlin retaining the Cruiserweight Title on NXT UK.

Nese bails to the corner to start as the announcers bicker about whether or not Lorcan cheated in the elimination tag. Nese’s hammerlock doesn’t get him very far so Lorcan takes it down into a headscissors on the mat. That’s reversed into a front facelock, which is reversed into a quickly broken Fujiwara armbar. That means a standoff until Nese is right back with another chinlock.

Lorcan slips out in a hurry and starts cranking on the wrist before going to a headscissors. Back up and they strike it out with Nese having to bail to the floor. That doesn’t last long as Nese elbows him down and slaps on a bodyscissors to keep Lorcan down for a bit. Lorcan fights up again and hits the running Blockbuster for two but Nese snaps the throat across the top. The Lionsault gets two and it’s a German suplex into the corner. The running Nese finishes Lorcan at 9:47.

They slugged it out: 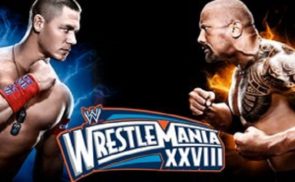 REVIEW: WrestleMania 28: The Biggest Match Of The Generation