It’s Wrestlemania season and that is not going to mean the slightest thing around here. That is not the best thing in the world to say but it isn’t like 205 Live is going to mean much of anything when it comes to the important shows. The best thing you can hope for around here is something entertaining week to week so maybe that can be the case this time. Let’s get to it.

Daivari stomps Samir down to start and hands it off to Nese, who gets rolled up for two. Sunil comes in for an armbar on Nese and it’s time for the Boyz to change places and stay on the arm. Daivari gets in a cheap shot though and it’s time to stomp away in the corner. Then it’s time to tie Samir in the ropes and hammer away before it’s back to Nese for a bodyscissors.

A spinning kick to the face gets two but Samir fights up and grabs a neckbreaker, allowing the hot tag off to Sunil. The Bollywood Blast is broken up and a powerslam into the Persian Lion splash gets two on Sunil. Samir gets to clean house as well and it’s a big dive to the floor to take the villains down. Back in and Daivari hits a Rock Bottom for two on Samir but Sunil grabs a rollup for the same. The hammerlock lariat finishes Sunil at 8:41.

We look at Jordan Devlin beating Kushida on NXT and having a staredown with Santos Escobar. Then Shawn Michaels came out to send in a ladder, turning the Cruiserweight Championship unification match into a ladder match.

Adonis grabs the arm to start and cranks away but Grey walks through the ropes to counter into one of his own (a Nigel spot, much to his appreciation). Grey cradles him for two but gets powerslammed down for two more. A neckbreaker gives Adonis another two and he hammers away in the corner for a bit. Some elbow drops have the crowd trying to get Grey back to his feet, where Adonis spinebusters him back down.

We hit the chinlock on Grey but he forearms his way to freedom in a hurry. Adonis dropkicks him out to the floor but Grey walks the rope for a high crossbody to start the real comeback. A Michinoku Driver gets two on Adonis, who is right back with a knockdown of his own. Adonis’ dancing right hand to the mat sets up a spinning kick to the head for two. Grey sends him into the corner though and So Much Prettier finishes Adonis at 8:36.

Post match Ariya Daivari comes out to raise Grey’s hand but Grey walks off to end the show. 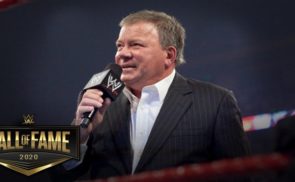