It’s an interesting change of pace this week with General Manager Drake Maverick fighting Mike Kanellis for the sake of his wife’s honor. The fact that Mike’s wife is the only champion in the whole thing is just confusing. Other than that, we’re still in need of a #1 contender and I’m not sure if they have time to set up anything worthwhile. Let’s get to it.

We open with a long recap of Maverick vs. Kanellis, which has been going on since the spring. Mike’s wife Maria is demanding that he be a man and tonight, Mike is fighting to appease her as well. Mike finally pushed him too far and Drake is standing up for himself and his wife.

This is over a stolen Bollywood trophy, which is now awarded to the commentary team. Sunil starts fast and stomps Tozawa down in the corner but he strikes away and smiles, with the mouthpiece offering a nice bonus visual. Kendrick comes in for two off of Tozawa’s backsplash and it’s off to the armbar. A running enziguri/Downward Spiral combination gets two on Sunil but Samir breaks up a suicide headbutt attempt.

The dancing begins and now let’s talk about Charlotte vs. Trish Stratus because the match is that uninteresting. Tozawa fights out of a chinlock but gets hit in the ribs to put him right back down. The chinlock goes on again, only to have Tozawa fight up again. This time it’s an enziguri to Samir and the hot tag brings in Kendrick. A dropkick gives Kendrick two so it’s time to grab the award. Sunil hits Samir by mistake though and it’s Sliced Bread #2 into the top rope backsplash to give Tozawa the pin at 5:49.

It isn’t the most surprising result: 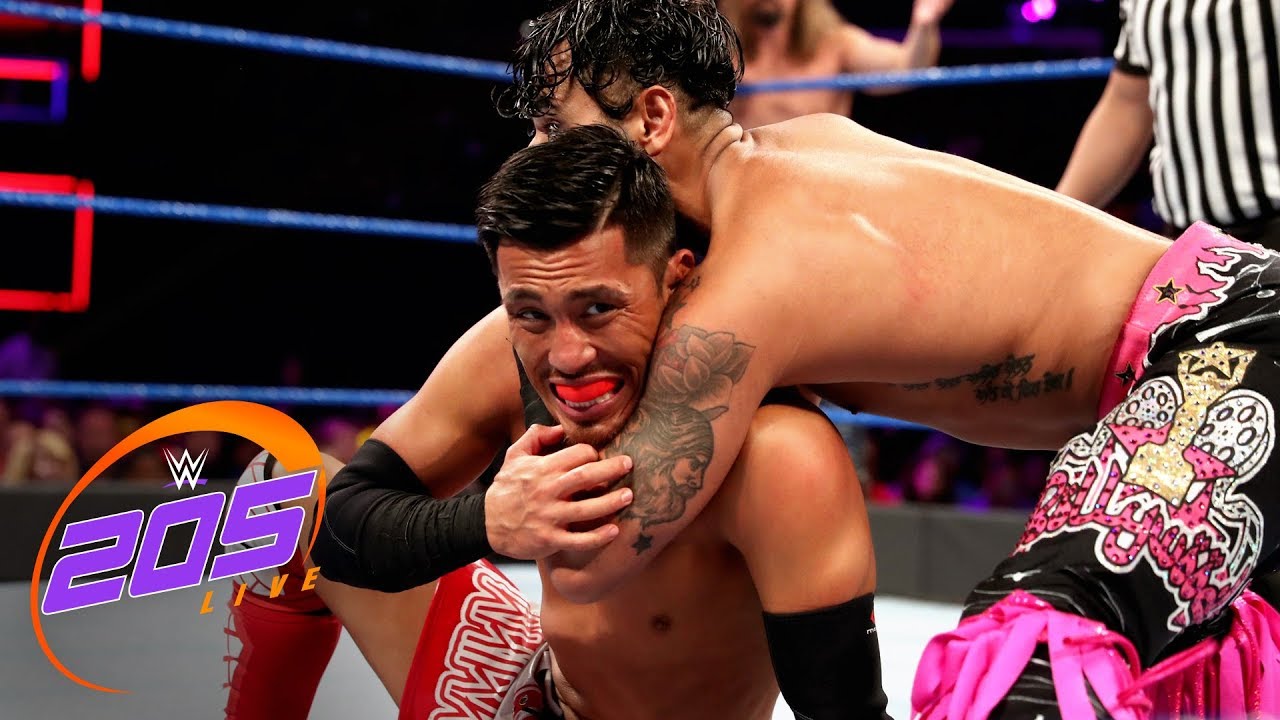 We get the last part of the Humberto Carrillo interview, this time talking about wanting to win the Cruiserweight Title and how awesome the 205 Live roster really is.

Lucha House Party is split on Carrillo, with Lince Dorado thinking a real luchador should wear a mask.

They trade wristlocks to start with Daivari mocking the LUCHA chants early on. Some early near fall attempts go nowhere but Daivari bails to the floor to avoid the Golden Rewind. That means a delayed dive from Dorado, followed by a springboard splash for two back inside. A running hurricanrana into a dropkick gives Dorado two but Daivari sends him outside in a big crash. The chinlock doesn’t last long back inside and Dorado makes it worse by blocking the Iconoclasm.

Daivari settles for a rather nice snap DDT for two but since he’s a bit of a cocky heel, he spends too much time mocking the Jerry Lawler middle rope punch. Dorado gets a boot up and Daivari heads outside, meaning it’s a slingshot dive. Back in and Dorado tries a very far dive, which is superkicked out of the air for two. The Billion Real Dream is countered into a victory roll for two so Daivari hits a Rock Bottom for two of his own. Dorado is right back up and kicks Daivari in the head, setting up a spinning rollup into a jackknife pin at 9:47.

One of the three: 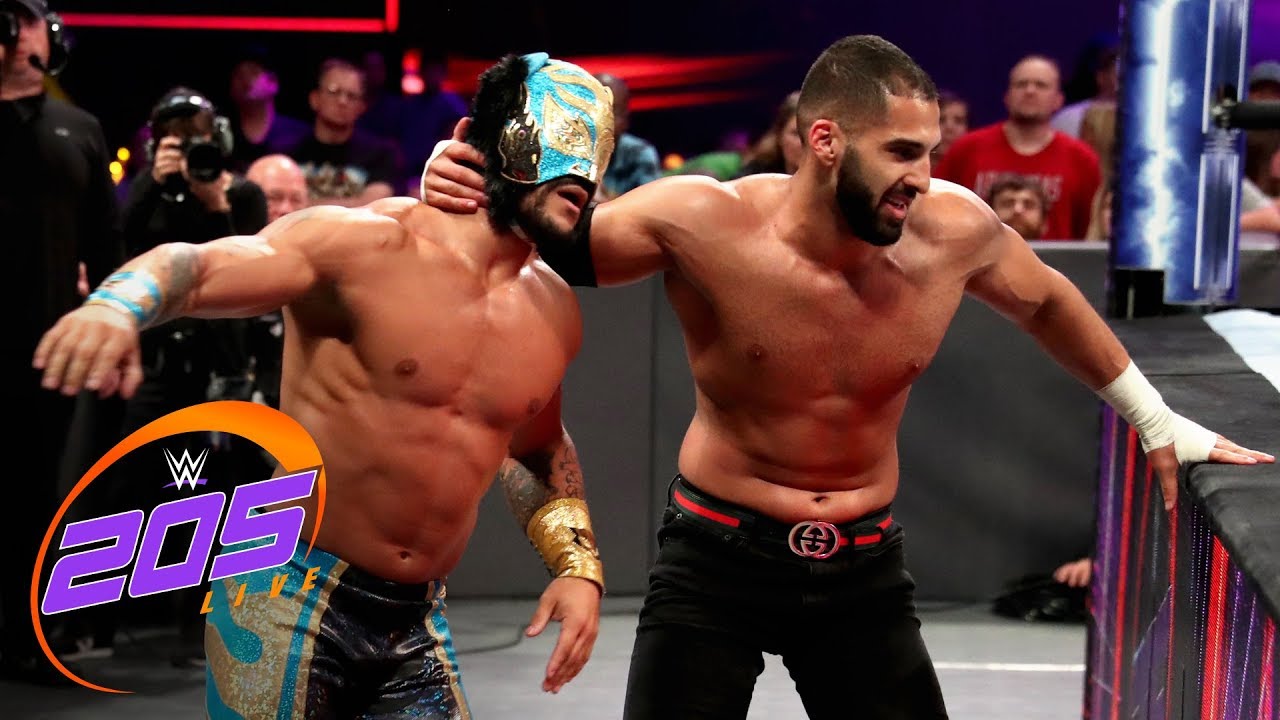 Drew Gulak wants a challenger at Summerslam and if Mike Kanellis wins tonight, maybe he gets the title shot. Otherwise, Drew is back where he started and that doesn’t work. Whoever faces him at Summerslam is in for pain and punishment.

Unsanctioned. Drake comes out to the 205 Live theme instead of his own song. Mike jumps him from behind during the entrances and Drake gets sent into the set. More whips send Drake into the barricade and Mike puts a sign in his face for a bonus. Since the bell hasn’t rung yet, Mike thinks that’s enough for a forfeit. Drake gets in and says ring the bell so Mike kicks him into the corner.

Mike shouts about following Drake’s rules for too long before sending him outside again. Another whip into the barricade takes Maverick down again and Mike does it a few more times for good measure. Drake gets sent face first onto the announcers’ table as Mike shouts about 205 being his brand. For a bonus, Drake gets put into a chair and superkicked out of it so Mike can be alone in the ring. A single right hand drops Maverick back inside and a huge clothesline….gets no cover as Kanellis takes Maverick’s belt off.

The whipping is on, followed by a sleeper to bring Maverick back to life (that hold has the worst success rate) and he sends a charging Kanellis to the floor. Another charge lets Kanellis catch Maverick though and it’s a swing into the barricade. Mike still won’t finish it though as he would rather go over and grab the Maria wanted posters off the announcers’ table. One of those goes into Maverick’s mouth but that fires Maverick up again. Maverick slugs and stomps away, setting up a running basement dropkick in the corner.

Now it’s Maverick whipping him with the belt and the suicide dive connects. A DDT onto the announcers’ table drops Kanellis again but the elbow drop from the barricade only hits table. Back in and Mike loads up his swinging neckbreaker but puts Drake on top instead. The super Razor’s Edge is countered into a super hurricanrana, setting up a Dudley Dog for the pin at 12:49.

Not the best treatment of your boss: 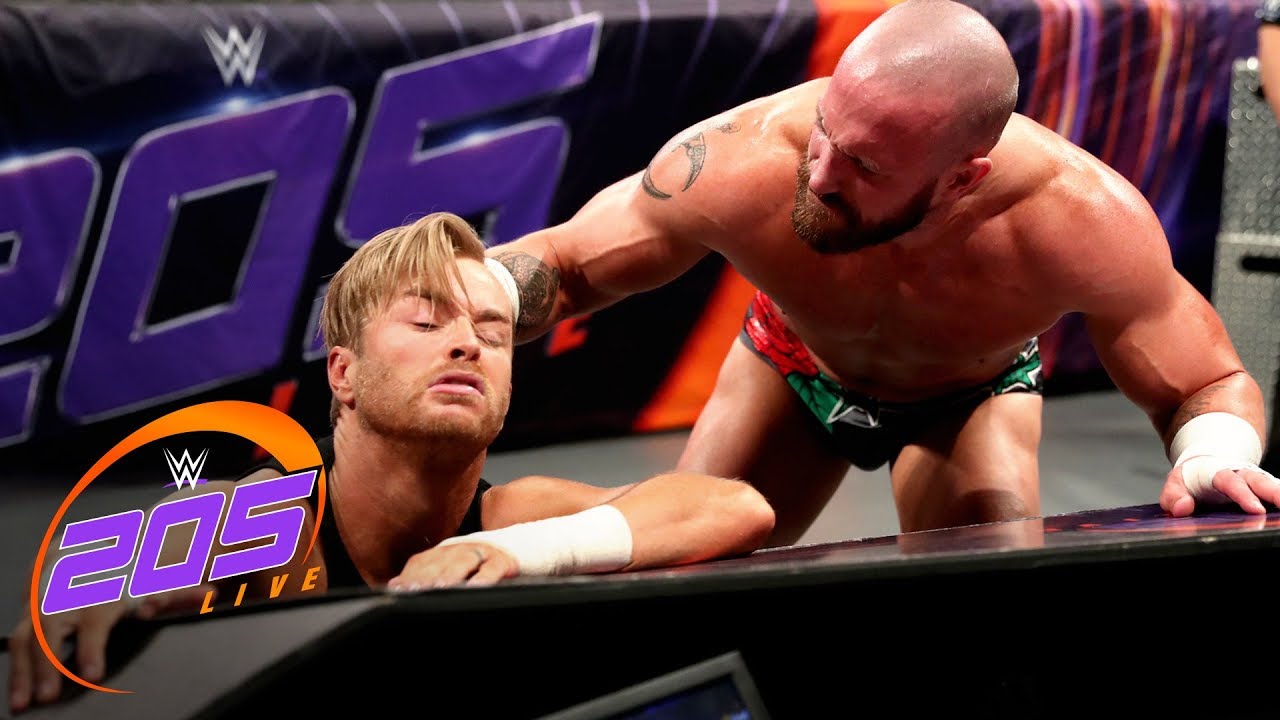