It’s a bigger week than usual here as we have Legado del Fantasma for a change. That’s not something you usually see, as the Cruiserweight Champion is rarely on the cruiserweight show. You’ll only see that kind of logic in WWE but it has never stopped them before. Let’s get to it.

Chase Parker is here with Martel. Matt rolls away from him to start and hits the celebration before grabbing a headlock. Scott sends him into the corner and laughs a bit as some fans say Martel got swerved. The frustrated Martel is taken to the mat in a hurry and punched down before Scott chops him into the corner. A running elbow to the face sends Scott up top but Parker pulls him down for the DQ at 3:17.

Post match the beatdown is on but here’s Tony Nese for the save and a tag match is made.

Ever Rise vs. Isaiah Scott/Tony Nese

Parker jumps Scott from behind to start and snaps off a suplex but Scott is right back up. A reluctant tag brings in Nese to power Parker down without much trouble. Scott comes back in for two off a double suplex but Parker sends him face first into the middle buckle. It’s off to Martel for an armbar before Parker is right back in for an elevated elbow to the back. A front facelock doesn’t last long for Parker as Scott jawbreaks his way to freedom.

The hot tag brings in Nese to clean house with some shots to the face and a dive onto Martel. The Lionsault gets two on Parker and everything breaks down into a four way slugout. Nese kicks Parker in the face and hits the running Nese, setting up the Swerve Stomp for the pin at 6:39.

We look at Drake Maverick attacking Legado del Fantasma and needing Breezango to make a save. The six man was set up for Great American Bash.

See you at the Bash:

It’s Raul Mendoza/Joaquin Wilde for the team with Santos Escobar in the corner. Wilde shoulders Ruff to start and it’s Mendoza coming in for a double back elbow. Mendoza knocks him into the corner and allows the tag to Gray, whose head is clotheslined off in a hurry. A Russian legsweep/running kick to the face finishes Gray at 3:20. 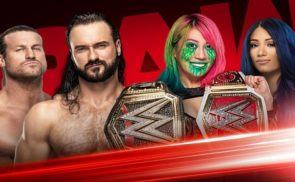