I have no idea what to expect on this show anymore as it has jumped from a nothing show to something slightly interesting to an actual supplemental show for the cruiserweights. What matters in the end is how much the cruiserweights are actually featured, which can vary pretty wildly. Let’s get to it.

Miles kicks away at Mansoor’s leg to start and then throws him down. Mansoor is right back with a headlock on the mat, only to get tripped down again. This time it’s Miles grabbing a headlock, followed by a knee to the ribs to keep him down. Mansoor sends him to the floor but gets his throat snapped across the top. The running crotch attack on the rope lets Miles check his hair, plus get two for a bonus.

Back to back neckbreakers get back to back twos and Miles grabs the chinlock. That’s broken up and Mansoor trips him up, setting up a spinebuster. The slingshot neckbreaker gets two on Miles but he avoids the moonsault. Miles grabs a flapjack but Mansoor is right back with a One Winged Angel into a Death Valley Driver for the pin at 7:46.

More of this please:

We look back at Legado del Fantasma beating Drake Maverick and Breezango on NXT.

Non-title and the rest of Legado is here with Escobar. Feeling out process to start with Escobar wisely going after Lorcan’s banged up arm. That means an early armbar and Lorcan’s arm won’t let him slug his way out. The arm is wrapped around the rope but Lorcan reverses into a front facelock. That’s reversed into a half crab with a knee in Lorcan’s back so a rope has to be grabbed.

A hammerlock suplex bangs up the arm even more and Escobar sends it into the post. Escobar splashes the arm on the apron and it’s off to something like a Tequila Sunrise. Another rope break is good for the save and Escobar misses an enziguri. Lorcan slugs back with the good arm and hits the running Blockbuster. Escobar is fine enough to hit a Codebreaker on the arm though and the Phantom Driver is good for the pin at 8:39. 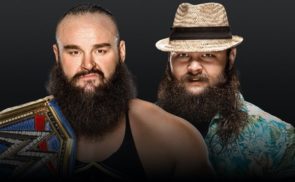 When Was The Wyatt Swamp Fight Filmed?