We’re getting close to the next pay per view and that means it’s time to find a new #1 contender. Odds are that’s going to be either Oney Lorcan or Humberto Carrillo, or maybe both at the same time. Carrillo would be more interesting but they would need to find a way for him to get around Lorcan first. Let’s get to it.

Earlier today, Lorcan requested a title match but Drake Maverick put him in a #1 contenders match with Carrillo instead. They shake hands over it and everything seems cool.

Daivari runs him over with a hard shoulder to start and lays over the top for a breather. Kalisto hits a running headbutt/shoulder and, after slipping a bit for a chuckle, lays on the ropes as well. The suicide dive hits Daivari but he trips Kalisto off the apron, setting up a running dropkick to send Kalisto flying into the barricade.

Back in and a reverse layout DDT gives Daivari two but Kalisto elbows him in the face. The strikes to the face have Daivari staggered for a bit until hope is lost with a big clothesline. We hit the chinlock again, followed by a hard spinebuster (it’s a Minnesota thing) for two. The chinlock goes on again, this time triggering the comeback with a hurricanrana driver.

They head to the apron for an enziguri and another hurricanrana to send Daivari outside. Back in and Kalisto gets a 450 but the cover pulls Daivari’s feet into the ropes for a smart save. The Salida Del Sol is blocked by a mask pull, setting up the hammerlock lariat to finish Kalisto at 13:05. 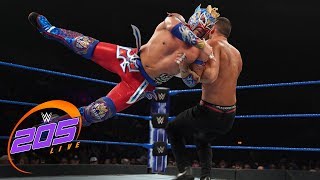 Post match Daivari stays on him but Metalik and Lince Dorado make the save. Dorado gets in his face but Daivari talks a lot and Dorado doesn’t hit him, much to Kalisto and Metalik’s confusion.

We look at Tony Nese being eliminated last week.

Tony Nese isn’t sure if being the premiere athlete is enough anymore.

The Singh Brothers haven’t been award winning as of late so they’re going inside the Bollywood Actor Studio for a film study. When they get back, they’ll be the best tag team in 205 Live history.

The winner faces Gulak for the title at Clash of Champions. They shake hands to start as we hear about Carrillo not being pinned in five months. That’s a sneaky winning streak. Lorcan headlocks him down into a headscissors counter before headlocking him down into a headscissors counter. Back up and Carrillo commences the flipping, setting off a pinfall reversal sequence for two each.

Lorcan gets a little more brawlingish and knees him in the ribs, followed by a whip into the corner to keep Carrillo in trouble. Carrillo’s handspring elbow is cut off with an elbow to the back and it’s a bodyscissors to stay on the ribs. Since the arms are free, Lorcan throws on a sleeper for a bonus. Carrillo rolls around a bit and gets to his feet but has to elbow out of the half and half. An elbow to the face sets up a standing moonsault for two on Lorcan and he bails to the floor.

Carrillo is right back up and hits a running flip dive to take Lorcan out again. Back in and Carrillo hits a springboard spinning kick to the face for two, followed by a rolling moonsault for the same. Lorcan blocks a moonsault with raised boots and it’s time to head back to the apron for slugout. Carrillo gets in a slap to the face and a top rope dropkick to send Lorcan outside.

The Aztec Press is broken up but so is the half and half. A sitout powerbomb plants Lorcan for two but he rolls outside for a breather. Carrillo follows and this time the half and half connects to knock him silly on the floor. The suicide dive rocks Carrillo again and it’s time for a superplex, which is knocked off again. The twisting 450 finishes Lorcan for the title shot at 17:30.

Worthy of a title shot: 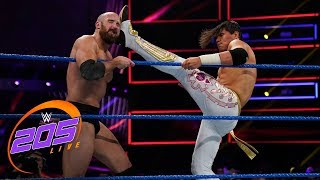 Post match Carrillo celebrates until Gulak comes up on screen to applaud his former student for winning. Gulak is a different teacher now and he is going to teach Carrillo a new lesson at Clash of Champions. He is the law. 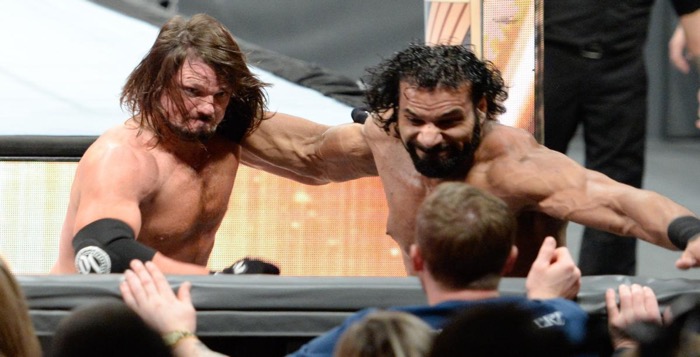