This is a special show as the whole evening is dedicated to one match. In this case that would be a ten man elimination tag, which has been built up all week on WWE.com. That’s a good thing though as the general lack of effort being put into the show doesn’t do it any favors, so having something like this is a good idea for a change. Let’s get to it.

Captain Drew Gulak goes over his picks and talks about how he isn’t worried tonight.

Captain Oney Lorcan doesn’t have any of his partners’ attributes but he knows how to fight. Gulak’s days as champion are numbered.

Garza and Carrillo are cousins. It’s a big staredown to start with Gulak sending his teammates into the others for a fight with the ring being cleared early on. Gallagher brings in matching umbrellas for four stereo Mary Poppins Drops. We finally settle down for the opening bell with Gulak having to escape Lorcan’s half and half suplex attempt. Scott comes in to work on Gulak’s arm but it’s quickly off to Garza (Nigel: “The most beautiful man in the world!”) to face Carrillo with the latter flipping around to take over.

Hang on though as it’s time for GARZA TO TAKE OFF HIS PANTS! Garza suckers him in with a handshake and it’s time to stomp away in the villainous corner. Gulak and Kanellis take turns stomping on Carrillo with Gulak slapping on a chinlock which doesn’t last too long. Carrillo is back up and brings in Tozawa to start cleaning house. After a flip dive from the apron puts Gulak down, Tozawa puts Kanellis in the Iron Octopus. Kanellis slips out though and sends Tozawa into Gallagher, setting up the spinning neckbreaker to get rid of Tozawa at 6:09. Gallagher is in immediately with the headbutt to get rid of Kanellis at 6:25.

Gallagher and Nese grapple on the mat for a bit until Gallagher starts hammering away in the corner. Daivari pulls Gallagher down by the arm though, sending Nese into a bit of a rant about how he doesn’t need the help. Gallagher puts Nese on the floor but Daivari’s low bridge breaks up a suicide dive (and nearly breaks an umbrella). The crash lets Nese hit the sunset driver to get rid of Gallagher at 8:39.

Scott comes in for an anklescissors on Nese and an Austin Aries middle rope elbow to Nese’s seated back. A cartwheel splash of all things gets two but Nese pulls him over to the corner for the tag off to Garza. The camel clutch goes on and we cut to the back where Tozawa and Gallagher are arguing with Brian Kendrick saying he didn’t do anything last week. Kendrick and Gallagher will fight next week.

Back to full screen with Nese holding Scott in a bodyscissors as they’re finding a smart way to set up next week while having one match. Scott is back up and backdrops Nese to the floor but Garza pulls the ring skirt and sends him into the steps. They have a lot of time here so it makes sense to keep Scott in trouble for a long time.

It’s back to Gulak for more arm cranking, followed by Garza’s abdominal stretch. You would think villains would get the hint at some point but, again, Scott escapes and hits a superkick. Nese comes in and sends him hard into the corner….right next to Lorcan. The running knee hits Scott in the corner but the legal Lorcan comes in for a failed half and half attempt. Nese and Lorcan chop it out as they are known to do but Lorcan slips out of the sunset driver. The half and half suplex finishes Nese at 18:30 and we’re tied at three each (Lorcan/Carrillo/Scott vs. Gulak/Daivari/Garza).

Lorcan wants Gulak but gets Garza instead, meaning it’s back to Carrillo (Nigel: “The lesser Garza.”) instead. Carrillo kicks him down and hits a fast standing moonsault for two and it’s already back to Scott for stereo basement superkicks (Nigel: “NO! NO! NOT TO THE FACE!!!”). Scott’s running jump kick to the back of the head rocks Garza and it’s the Alberto double stomp to Daivari in the corner. Scott’s top rope stomp gets two on Garza with Gulak diving in for a save. Scott and Gulak take turns pulling on each other’s hair with Scott going throat first onto the top rope. The Cyclone Crash eliminates Scott at 21:59.

The remaining five stare each other down but Daivari throws Garza at Carrillo to get is down to one on one. Carrillo gets cheap shotted into the corner and it’s Daivari grabbing a neckbreaker for two. The chinlock goes on and we go split screen to hear the Lucha House Party talk about pudding and Kalisto facing Daivari next week. Back to full screen and Daivari blasts Carrillo with a clothesline for two. Gulak’s chinlock is broken up with an armdrag and it’s a pair of stereo crossbodies with Garza for a double knockdown.

The hot tag finally brings in Lorcan (though it’s not “well over thirty minutes into the match” as Vic said) for a double running Blockbuster on Daivari and Garza, followed by the running flip dive to take out Gulak. Everyone winds up on the floor and Gulak chairs Lorcan in the ribs for the DQ at 29:23.

Gulak gets in another shot to Lorcan’s back against the post and then does it again in the ring. As Gulak poses in the ring, we go split screen for an NXT commercial. Back with Garza crotching Carrillo on top for two and not being able to believe the kickout. Carrillo and Garza slug it out from their knees until Carrillo gets up for the springboard spinning headbutt.

Lorcan is fine enough to come back in and chop away at Daivari and hit the running elbows in the corner. One too many charges lets Daivari get up a superkick but the top rope splash misses. The hammerlock lariat is countered into a rollup to get rid of Daivari at 32:59, leaving us with Lorcan/Carrillo vs. Garza. Carrillo is back in with a springboard spinning kick to the face for two on Garza. Things slow down for another slugout until Garza dropkicks him out of the air for his own two. A basement dropkick gets two more on Carrillo but Garza misses his moonsault. The Aztec Press finishes Garza for the final pin at 37:05.

That was borderline epic: 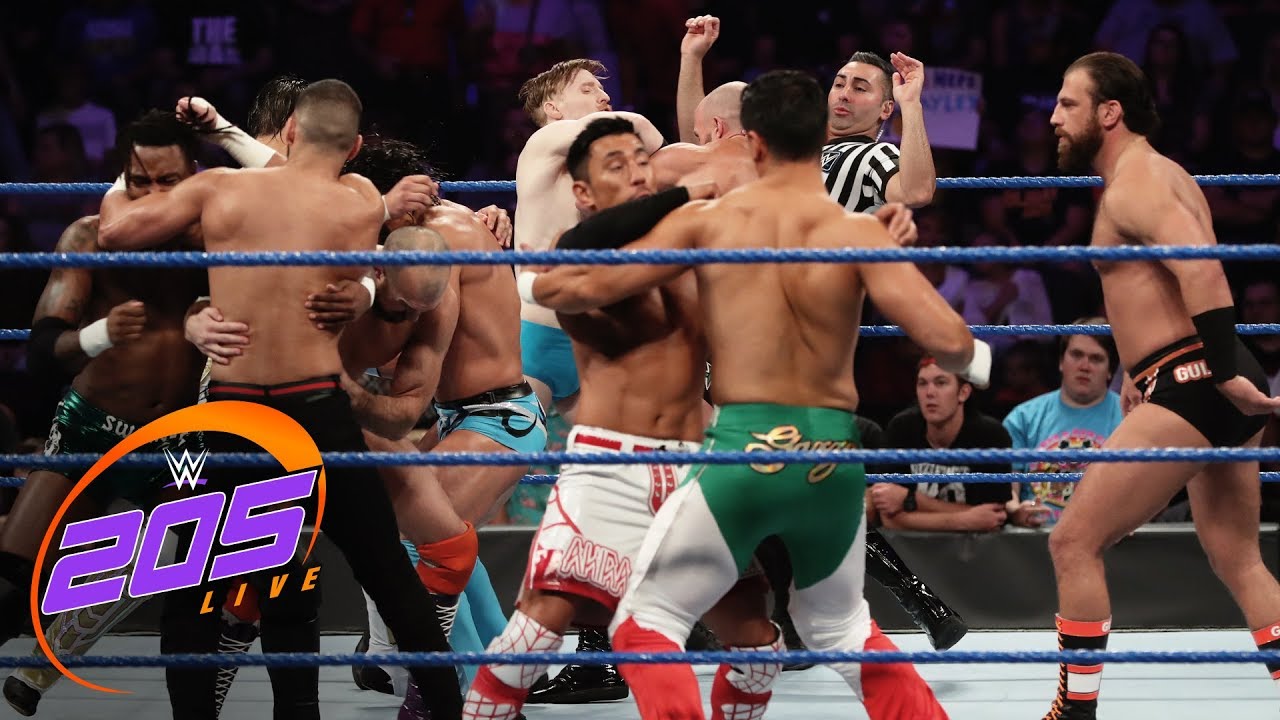