‘All Out’: In-Person Perspective On AEW’s Biggest Night Of The Year

AEW All Out was perhaps the biggest night in the company’s history. Titles changed hands, legends arrived and newly signed stars made their debuts. The ideal pro wrestling event provides a series of huge moments from start to finish. Each one brings the fans to their feet and each one establishes the greatness of the event itself.

This is precisely what All Elite Wrestling delivered on September 5 in Chicago. From the opening bout to the main event, the boisterous crowd was lively and completely dialed in. Momentum never waned and anticipation grew by the second. All Out is the event that shows exactly what AEW is all about. 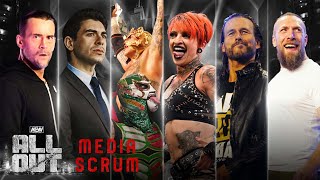 All Out On The Card

Eddie Kingston was the first man out of the curtain on the main card. The 19-year veteran has no fear, making him the perfect opponent for Miro. Miro is the most dominating TNT champion in AEW history and he brings that dominance to bear against Jon Moxley’s partner in crime. Miro retained the title in a smash-mouth, hard-hitting affair.

Kingston is a fan favorite, but the audience were also very vocal for Miro. While Miro is a great heel, he’s also highly entertaining. He earns respect every time he performs in the ring and fans continue to show him love for his work.

The other half of the Moxley mob, Jon Moxley himself,  faced off against New Japan Pro Wrestling legend Satoshi Kojima. Once again proving his mettle against the biggest international superstars, Mox brought the fight to Kojima. The live crowd showed its love for both men and in the end, it was an honorable fight between two battle hardened warriors. Moxley emerged with the win and another notch on his belt.

.@ToBeMiro catches all 240 pounds of @MadKing1981 in mid-air and drives him to the floor!

But now, Moxley has another international threat to deal with in the form of The King, Minoru Suzuki. The leader of Suzuki-gun came to the ring after Moxley’s win and laid out the former champ with a Gotch Piledriver. Mox beat The King in New Japan, but what happens when the two meet in an AEW ring?

Moxley’s booking dictates that he consistently outlasts his opponents through one war after another. If he continues to do that with the AEW roster, he will be back in title contention in no time. But if that’s not the plan, the best way to use him is against outside talents in high profile matches. Moxley versus Suzuki is the best way to keep Jon rolling in the right direction.

Britt Baker continues to be one of the most popular talents working in AEW today. The Women’s World champion is supremely confident, she’s egotistical and the fans absolutely love her for it. Every time it appears that Baker will perhaps drop her championship, she manages to pull out the win. This night was no different. Britt’s opponent, Kris Statlander, had arguably the best match of her AEW career thus far. She didn’t walk away with the title, but she could be on her way to a championship reign at some point.

Statlander has definitely improved her ring work, but this match did have a couple of awkward spots. Kris’s turnbuckle suplex on Baker could’ve ended very badly, as Statlander chose not to reset after first being unable to bring Britt over into the ring. It’s not necessarily a reason to sound the alarm just yet, so only time will tell how she performs moving forward.

The Young Bucks versus The Lucha Brothers is easily one of the most exciting rivalries in All Elite Wrestling’s young history. Matt and Nick Jackson, as well as Penta El Zero Miedo and Rey Fénix, bring every ounce of athleticism and showmanship they have every time they lock it up the ring. The Lucha Brothers’ win gives them the AEW World Tag Team championships. But it also opens the door to more great future rivalries to come.

This was perhaps the match that stole the show. It was a fast-paced bout featuring one high impact spot after another. Penta’s top rope Canadian Destroyer on Matt Jackson brought the house down and Rey Fénix did the same with a leaping body press from the top of the cage. The Lucha Bros definitely earned this win.

The 21-woman Casino Battle Royale showcased the best and brightest from AEW’s women’s division. It’s a division that has seen tremendous growth over the past year and it’s now among the best in the industry. Ruby Soho was the surprise wildcard for this match and she eliminated Thunder Rosa to win the bout.

Chants of “We want Tessa” scatter throughout the match. But chants of “No we don’t” follow immediately afterward. Tessa Blanchard did not show up in this one and AEW didn’t need her. Ruby Soho was the star of the match. The fans sang along with her entrance theme, making it a special moment for the former Riott Squad leader. Soho is now All Elite and AEW will surely use her on that elite level moving forward.

All Out Is Jericho

Much was said about Chris Jericho versus MJF 4. Why would MJF win three straight matches against Chris, only to then face him again for a fourth time? Does this match help Jericho, or MJF? It did appear that MJF was on his way to the top, but wouldn’t a loss at this stage actually hamper his championship rise? Those questions will likely be answered now, as Jericho indeed walked away with the win.

The fact is that the crowd erupts  for Jericho. His live guitar intro performed by Fozzy lead guitarist Billy Grey was hard for the audience to follow as it wasn’t immediately clear what was he was playing, but it had no impact on the match itself. Some fans have mixed opinions on Chris, but there is no denying his popularity continues to endure.

CM Punk’s return to professional wrestling is well known around the world at this point. The Second City Saint makes no secret about the level of respect he has for AEW. Questions regarding ring rust and physical readiness were all answered when he stepped up to Darby Allin. Their match was well wrestled from the start and while Punk won, Darby is still in great shape in terms of his AEW standing.

CM Punk received a massive pop and he looks as though he’s still very much on his game. He has a lot to offer to the younger stars in the company, which means he’s likely not done working the AEW originals. But when the time comes, Punk will surely rise to the top of the company.

It’s a tall order to follow CM Punk in his hometown. This means that any match happening afterward could be doomed to fail. But Paul Wight’s return to the ring against QT Marshall was much better than many fans expected. In the end, Wight took The Nightmare Factory down a peg when he left Marshall flat on his back.

Paul Wight is still a fan favorite and he’s earned respect during his career. The fans responded well to him and with that being the case, he could be on his way to more matches in the future. Whether or not his body will hold up to the grind of the ring however,  remains to be seen.

The main event of All Out was Kenny Omega defending the AEW World Championship against Christian Cage. Cage’s previous Impact World title win over Omega proved that Kenny was beatable. That victory created at least a shred of uncertainty when it came to their All Out showdown. But Kenny was just one step ahead for most of the match and he did retain the title in the end.

Of course, the big story here is the debut of both Adam Cole and Bryan Danielson. While many had predicted Bryan’s arrival as a sure-bet, the same wasn’t true of Cole. So when the two men showed up back to back, the roar was deafening. Adam Cole is now a heel with The Elite and Bryan Danielson is in his element as a top babyface. AEW threw everything it had at this event and it absolutely delivered on every level. Cole and Danielson are two major players and they will do their part to bring more eyes to the AEW product. That work has already begun and only time will tell what happens next.

Danielson cut a promo after All Out went off the air, in which he praised the AEW locker room. He stated that he loved working in WWE, but that he left anyway. He left because of AEW’s talent, their fans and the fact that he’s a wrestler. Bryan Danielson is in AEW to wrestle and it looks as though his first stop is The Elite. 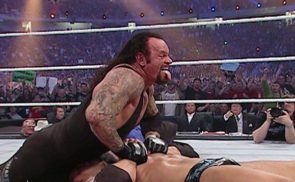 REVIEW: WrestleMania 23: They’re All Grown Up