Rob Van Dam is one of the most popular pro wrestling stars of all time. The former ECW mainstay and WWE champion is still active in the business today, after a nearly thirty year career and he’s not hanging up the boots anytime soon.

But The Whole F’N Show has been in the headlines recently for his life outside of the squared circle. That life includes a documentary film called Headstrong, which began as nothing more than a project focusing on RVD’s standup comedy act.

However, the film quickly became a crusade to educate the general public on the reality of concussions in sports. It’s a topic that RVD knows all too well, especially over the past three years.

It was in 2016 when working Pentagon Jr. in PCW, that Rob suffered a concussion which completely changed his outlook from that point on. In an exclusive interview with Wrestling Rumors, RVD talked about the bump that led to the concussion and how it didn’t seem that bad at first.

“It was November of 2016, it was just a very simple bump. It was very non-impactful. It was amazing that the symptoms would be so dominant after something like that. The bump was so soft and so simple, that I’m sure he (Pentagon) doesn’t even know about it, unless someone that watched the movie told him.”

That concussion lead Rob to experience various symptoms, including double vision, which persisted long after the match. RVD said that he had actually experienced hundreds of concussions before this one, but that none of them were this severe. Van Dam believes that a regular use of marijuana during his life helped prevent him from experiencing fallout from concussions, which many of the other wrestlers he knew often dealt with.

“I was asking my peers years ago, if they had any concussion damage, you know, long lasting, what we call post-concussion syndrome. I was surprised that most of my peers said yeah, they had no question about it. I still feel that way, when I talk to my peers, they seem to be living with symptoms. Some of them would say ‘I see stars throughout the day.’ Some of my friends would say headaches, or that they just doze off in the middle of a sentence. I was hearing everybody say that, I was like wow I’m really lucky because at that time, I had zero.”

RVD said that he was talking to scientists about developing a neuron protector with CBD’s. He also said that he wanted to help not only his peers, but other athletes as well. But he admits it won’t be easy, especially since the pharmaceutical companies want to make as much money as possible and they’re the ones that have the most to lose.

But many pro wrestling fans may be surprised to know that RVD doesn’t necessarily believe that the sport has to change due to concerns over concussions. Van Dam said that if the game changed too much, then it would no longer be professional wrestling.

“I’ve heard many athletes say that professional wrestlers are the toughest people on the planet. One would have a hard time disagreeing with that.

To take that punishment, you do have to be tough. I don’t think that should change. I don’t want to see pro wrestling made into a Nerf world where people are wearing Nerf outfits and falling onto Nerf pads, because it’s a different time now.”

RVD said the he considers pro wrestling his art form and that it doesn’t need to change, only that talents should be conscious and aware. Van Dam feels that pro wrestling needs to be a rough, physical contact sport so it retains some sort of integrity.

Rob then talked about how sharing his concussion story, which also includes dealing with depression, has helped others struggling with the same issues. RVD even mentions Ashley Massaro, whose recent suicide may have had everything to do with her own concussion issues.

“Just from sharing my experiences, it brings people out. I had people, when I talked about depression, that said yeah, they were afraid to get help. Now with concussions, I want to be that person, that representative of it. Ashley Massaro killed herself a few weeks ago and they’re being so hush-hush bout it. But what has come out is that she hung herself from a deep depression from concussions she had while she was wrestling. That’s as believable as anything else. I knew her, she didn’t seem like someone that wanted to die.”

Check out Tom’s interview with RVD!

RVD said that Ashley’s death was the one that truly affected him and made him want to change the world. He hopes that his movie opens up the conversation and he’s surprised that her death seems to have been “swept under the rug,” which is a belief shared by many fans.

Rob Van Dam spoke on the topic of pro wrestling of course, including how today’s locker room is much different than the ones he shared while coming up. RVD was also extremely impressed with many of today’s stars in Impact Wrestling, most notably Moose, his opponent at Slammiversary.

“They seem genuine, they’re happy to see the whole product move forward, they got the team attitude, where they really want the whole show to do well. So, I really like the guys. I think Moose, in his mind, figured where the big money was—working with RVD (laughs). He started calling me out and mocking me like right from the gimme. He’s no dummy.”

Rob Van Dam had much more to say, including his thoughts on his run in 2006, which saw him hold both the ECW and WWE world championships. RVD’s match with Moose can be seen live at Impact Wrestling’s Slammiversary event on July 7. 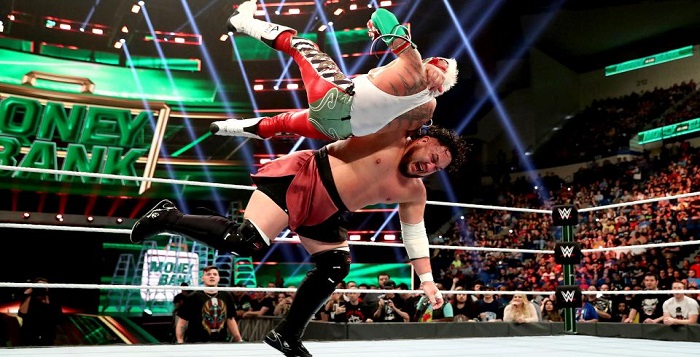