Brock Lesnar’s win at the 2022 Royal Rumble on January 29 was not surprising to many WWE fans. After all, he is The Beast Incarnate and a heavily featured star in the company. In fact, if not for Roman Reigns, Lesnar would likely be the undisputed face of WWE. Because of this, a Brock victory on one of WWE’s biggest nights of the year is not all that shocking.

But a Brock victory in the Men’s Royal Rumble Match? That’s another matter altogether. Lesnar dropped the WWE Championship to Bobby Lashley earlier in the evening, which opened the door for at least the possibility of a surprise Rumble entry. Reigns’ interference in Lesnar’s match made that surprise a reality. But was Brock’s win the right move? 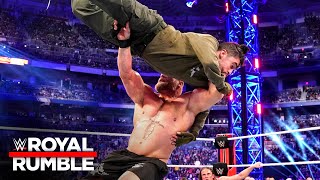 Very few Superstars have captured the imagination of WWE fans like Brock Lesnar. He’s been called an anomaly, which fits him perfectly. He’s a country boy at heart, with an easy smile and an awkward disposition. He doesn’t seem to be the epitome of friendly conversation and yet, he appears to be as laidback as any other babyface in the locker room.

But all of this is fairly new for Brock in the eyes of the fans, as most of the time, he’s a killer. He rarely ever smiled, he spoke even less and he was so physically intimidating that opponents would do all they could to stay away from him. He was The Incredible Hulk come to life and he smashed his way through every challenger put before him.

That’s who Brock Lesnar was and still is. The only difference now is that WWE presents him as a protagonist. This has increased his popularity, which was already on another level. Brock has always been viewed as the big fight star, the main event powerhouse that delivers a guaranteed payday for the company every time he stepped into the ring. Indeed, he is certainly still that guy.

However, much of the criticism leveled at Lesnar over the years has been that he gets too much. He wins all the time, he never feels pain and he destroys talents that should win. He doesn’t put anyone over and he doesn’t help get any younger talents move ahead. This has always been the buzz on The Beast.

WWE fans debated these points before Brock’s departure in 2004 and they have continued to do so since his return in 2012. Brock was an easy target for haters and there is no denying that. But there’s also no denying that Lesnar was booked to win. His monster run was manufactured from the ground up. He put in the work, but that work was preplanned. 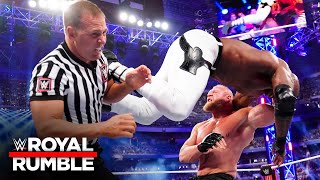 What’s Past Is Prologue

In the world of professional wrestling, this is normal. It’s common sense and most fans understand that. But for those critics who continue to roast Brock for his superhuman booking, no real world explanation will ever be enough. He’s the problem and that’s just the way it is. But is that true?

The Royal Rumble match is a prime opportunity to put someone over. That someone could be a brand new star, just beginning his journey in the company. Or that someone could be a talent whose hard work is finally going to be rewarded. Either way, that individual is on his way to the main event of WrestleMania. What better way to move the company forward than elevating the next generation?

But the truth is, that’s just not how Vince McMahon’s company does things. WrestleMania gets attention and makes money mainly because of the main events. Those main events must feature top tier Superstars and if not, the company doesn’t deem them good enough for the card.

Of course, there’s also the idea that Mania is a payoff for every Superstar that puts in the effort over the past calendar year. Those men and women carry the banner for WWE over the course of 12 months and when WrestleMania season comes, their time to shine only increases. So what is the truth? 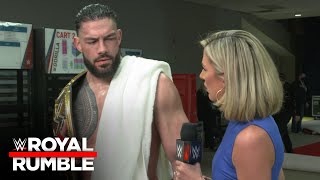 A Brock Lesnar win in the Men’s Royal Rumble Match sets up the WrestleMania main event against Roman Reigns. It’s just that simple. It’s obviously the match that the company wants and now the pieces are in place for the match to happen. A win by Big E, AJ Styles, or Kevin Owens perhaps could’ve worked and would possibly fit in the long run.

But none of those men are Brock Lesnar. He is who WWE wants in this spot, so his win was inevitable. The Royal Rumble Match did not open the door for other Superstars to step up and punch their ticket for WrestleMania. None of them were left standing in the end. Guys who deserve a shot will not get it this year, at least not against Roman. Brock Lesnar has that spot.

Whether or not this is the right move for WWE is difficult to say. Loyal fans who love the product and want to see their favorites do well, may not be happy with the result. But the live fans in attendance on January 29 loved Brock and that’s the reaction that WWE cares about. For WWE, it’s not about making everyone happy. It’s about telling the story regardless of who it appears to damage, or elevate.

The story itself is a very familiar one and fans know it, because they’ve seen it before. Lesnar and Reigns faced off in the main event of WrestleMania in 2015 and 2018. WrestleMania 38 will be Lesnar’s fifth main event and Reigns’ sixth. It will likely not be the last time either man works the Mania main event and that possibly includes against each other.

Does this mean that no one else is getting a chance? Is WWE becoming the Brock Lesnar versus Roman Reigns show, with no sign of an end in sight? Only time will tell. But there is no denying the bankability of Brock Lesnar, who continues to deliver every time he’s in the ring. He’s a beast that never stops and he’s working in a company that doesn’t want him to stop. It’s a perfect mix for both sides. Whether or not it’s perfect for the fans, is still up for debate. 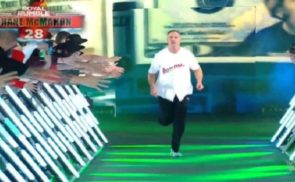