Kiera Hogan on Being the Newest Impact Wrestling Knockout, Wish-List

Impact Wrestling’s newest Knockout, Kiera Hogan was interviewed by James Walsh on Interactive Wrestling Radio, where she spoke about her debut, Mickie James, her height and Hulk Hogan, also giving her wrestling wish-list.

On making her national TV debut with Impact Wrestling:
“Of course! I’ve literally been so excited, so nervous. I’m just overwhelmed with so many emotions because I can’t believe it is finally time for my first match to air on TV. I’m so excited!”

On why a young lady would get in the wrestling business:
“First, I think you need to love this sport. I love wrestling. I started watching in 2005, 2006. The women drew me in. Just to be able to do something as cool as this. It is kind of like stunt work with acting … There is so much that goes into this. I feel like you have to love this sport before you can do it.”

On Mickie James being an influence:
“Yeah, Mickie James was my idol. She is my everything. But, definitely, her storyline with Trish Stratus was my absolute favorite. It drew me into wrestling. It was one of the best storylines, I think, ever. It was something so different for the women. I’m so in love with the theatrics of wrestling. Mickie James influenced my everything from everyday life to when I was in high school. I’ve been able to tell her this which is a plus for me and being able to be on the same card as her. She’s just amazing. I love her so much! (laughs). I met her when I was 16. I met her every year after that so she saw me grow in wrestling as I got further and further into my career. That weekend, I was able to be on that first SHIMMER with her and was able to really talk to her. She was just so proud of me. She’s almost like my second mother because I’m able to tell her, “Look, Mom! I’ve accomplished more!” (laughs) She’s literally the most down to earth person ever. She’s such a sweetheart!”

On working Reality of Wrestling:
“I love working Reality of Wrestling. I met Booker T maybe a few months before that. Then Mr. Hughes tried to get me on the show (Reality of Wrestling) especially after Athena (Ember Moon) left. I met Booker T. He was like, “I want you on my show!” I absolutely loved it. I loved the whole production of it. For it to be just a school, the production is very, very high quality. All of his students, girls, and guys, are amazing. To even be in the same room as him (Booker T) and have him agent my match. He had so much insight about different camera angles and stuff. He was amazing to work with. Him and Sharmell!”

On Impact Wrestling’s Knockouts:
“I feel like Impact Wrestling had made a stride with that (the WOmen’s Revolution) back in like 2006 and 2007 when women were doing ladder matches and steel cage matches! I remember when I was growing up… I still have Knockouts posters on my wall because I’m a fan. (laughs) I remember watching Impact and saying “I want to be a Knockout” because I felt they weren’t so cookie cutter. They were all about everyone being so different, everyone being their own person, everyone having their own character. I feel like that is what set them apart from the main stage. I feel like it gave everybody a reality check on people being different. Everybody’s not the same! They (TNA Impact Wrestling) had so many different characters and everybody was so different but everybody was able to do everything. I feel like people are now starting to take that under consideration… That women are able to do just about anything if you give them the chance.”

On being able to call herself a Knockout:
“I feel like I haven’t gotten used to hearing it yet because when you said it, I was like “Oh My God!” (laughs) My family was really weird about wrestling. They didn’t completely understand it, of course. Now they are like, “We’re so proud of you!” They still really don’t get it. But, I’m actually going to have a viewing party (laughs) for my first (TV) match for my friends and family. They know how hard I’ve worked. It feels so crazy to me to think that I’m a Knockout now. It was just a dream to me. So now, being able to do it, it is like dream to reality. Follow your dreams!”

On her wish list of Impact opponents:
“Rosemary is at the top of the list. She is someone that I feel, when I was researching, when I was watching Impact before I was taping, Rosemary was the one person I was really intrigued by. Her character, her persona, her theme song! I feel that she is just that character that sets her apart from the other females. She’s so different and I would love to be able to get in the ring with her especially with my spunky little attitude. I feel like that would be something to see and she’s at the top of my list. I cannot wait to work with Allie! I worked with her last year at WrestleCon. But, I really want to work with her more. She has evolved so much at Impact as a character – Oh my Gosh! But, all the girls… Allie, Sienna, Taya. I’m so excited to be able to work with all the girls. I can’t wait to step in the ring with each and every one of them!”

On if she’d ever want to do a “daughter” angle with Hulk Hogan:
“(laughs) I wouldn’t be opposed to it. I’ve actually had a conversation with Brooke Hogan about it. She got a hold of me and was like, “We should be sisters or something!” I was like, “That would be so cool!” My real name is Kiera Hogan. That is my real name. When I got into wrestling, I was like, “That works. I already am a Hogan!” But, I didn’t want to steal off what he (Hulk) was doing. I wanted to be my own Hogan. I want to be my own person. I want to be the “Girl on Fire” and set myself apart from Hulkamania and all that other jazz. But, I definitely am not opposed to it. Of course, I was a fan. But, I definitely want to be able to do my own thing at the same time.”

On what “Girl on Fire” means:
“When I first started training, I didn’t have a specific character. I was just Kiera Hogan. “The First Lady of Atlanta”, that was what the promotion I still work for, AWE, gave to me. After my first match, I kind of got comfortable… I kind of got full of myself, honestly. I was like, “I don’t want to go to training. I don’t want to do this, I don’t want to do that.” My boyfriend, Owen Knight, told me I needed to find my fire. When he said that, I thought “Girl on Fire. Why not? Why not be the fire?” That pretty much is where it started. I just needed to find my fire. Three years later, I completely found it.”

If you would like to listen to the interview, you can visit www.wrestlingpicenter.com.

You can find a match featuring Logan on Impact below.

What are your expectations of Hogan in Impact Wrestling? What would you like to see from her? Are you a fan? 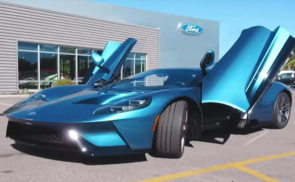 John Cena Explains Why Ford Lawsuit Should Be Thrown Out

NXT Superstar Bianca Belair on the Legacy of Her Ancestors