Former NXT head trainer Bill DeMott is moving beyond the professional wrestling industry and is now scheduled to appear in an upcoming film in what appears to be a big role.

DeMott is starring in the upcoming film titled ‘The Kamasutra Garden’ and as the title would suggest, the film is intended for an older audience.

Due for release on Valentine’s Day, the movie will see DeMott play a successful businessman who aligns himself with an exotic madam and a sex guru to start what they refer to as an ‘elite brothel’ called ‘The Kamasutra Garden’ in the state of Nevada.

In the realm of the film, it is the only brothel in the world where the girls are trained in the ancient art and science of ‘Kamasutra’ – lovemaking.

A brief outline of the plot indicates that DeMott’s character requests an award winning filmmaker named William to pay a visit to ‘The Kamasutra Garden’ to prepare a documentary about the brothel and girls that work there.

Please bear in mind that this film is intended for more mature audiences. If you meet that criteria, you may enjoy the film for what it is. The trailer is showcased below.

What did you think of the trailer? Will you watch the movie? 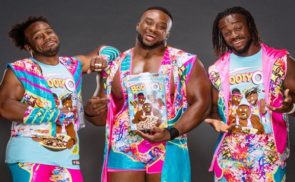