It was Dec. 30 TNA announced it had re-signed former WWE and TNA World Heavyweight Champion Kurt Angle to a new contract that will likely see him finish out his wrestling career. Angle, who had surgery to repair a torn ACL in 2013, has been inactive in the ring since, but re-upped with the company after WWE reportedly passed on offering him a deal of his liking.

In a new interview with the Associated Press, Angle makes a bold claim about his career:

“I had an incredible career at WWE,” Angle said, “but my career has actually been better in TNA.”

Angle jumped ship to TNA in 2006 after debuting with WWE in 1999. He was considered, at the time, to be the biggest name to make such a jump, and has been with the company ever since.

“It looks like I’ll be wrestling here sooner rather than later, if that gives you a hint,” Angle said, chuckling.

One of the major hold-ups with Angle and WWE was said to be his request for a part-time schedule. With “Impact” grouping its tapings and holding back on live events, this kind of workload seems plausible with TNA.

Well, as long as he’s happy. Though I know several who would dispute this claim.

Magnus Discusses His Heel Run, Wrestling as a Father, Career 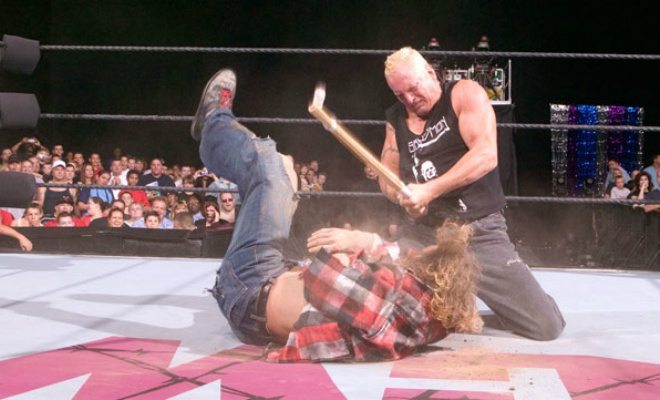 Tim Roberts, “The Zombie” in ECW, Passes Away