Last night’s Raw saw the fallout of Hell in a Cell, but the real story is the build toward Survivor Series. Each of the three teams that will represent Raw have begun to take shape, with qualifying matches and GM decisions alike setting the roster for the men’s, women’s, and tag team line-ups. Plus it was Halloween, so we got our annual assortment of pumpkin-themed street fights, backstage costumed segments, and horror house walkthroughs, adding a little more levity than usual to the proceedings.

But as it has been for the past several weeks, the big story going into Raw was once again Goldberg, who took his first bits of in-ring action since his return, delivering a beatdown to both Rusev and Paul Heyman. Goldberg didn’t look terrible, but he didn’t look great, either, owning up to his ring rust on Twitter after the show.

A bit of extra effort is always expected for someone returning to action after so long, but the real question is whether that effort will pay off before Goldberg and Lesnar anchor Survivor Series in less than a month.

We’ve got video highlights and full results below.

We open with Goldberg, who gets the full walking entrance. Before he can say much though, Paul Heyman interrupts. Heyman knows he isn’t a physical threat to Goldberg but he’s willing to get inside the ring. There’s no way he would get into this ring without significant backup because Brock wants to fight tonight.

Goldberg is more than happy with this and takes off the jacket (that man just has the look that suggests he could fight anybody) as Lesnar’s music starts up. Of course that’s not happening tonight but Heyman realizes this could go badly for him. Cue Rusev of all people to praise Goldberg before challenging him to a fight. A few knees to the ribs and a Jackhammer later, Rusev is down. A weak spear takes Heyman down as well and Goldberg gets to pose.

This is a Trick or Street Fight, meaning there are a bunch of Halloween themed weapons at ringside. Enzo and Cass come out as Buzz Lightyear and Woody because the world is smiling on us tonight. The pre-match speech hears Enzo say that Cass has a friend in him the beating will last to infinity and beyond. Cass: “There’s a snake in my boot!” Gallows throws him to the floor to start but gets beaten with a plastic skeleton. A trip to the bucket of apples has Gallows in trouble and we take a break.

Back with Gallows shoving pumpkin in Enzo’s face and throwing jack o’lanters at him for fun. A few orange kendo stick shots and a bulldog have Gallows in trouble and a pie to the face blinds Anderson. Cass kicks him through a table and puts a pumpkin (mostly) on Gallows’ head. The DDG sends Gallows chest first into a pumpkin (his head might have been a foot away from the mat) for the pin at 8:00.

Heyman leaves in an ambulance.

Kendrick is defending. Before the match, Brian says he taught everyone that he doesn’t need help to win. Kendrick: “That’s psychology.” Last night he played on TJ’s emotions so tonight, TJ better have a plan to get the title back. Perkins starts fast with the fireman’s carry enziguri for two and we take an early break.

Back with Kendrick losing control of a chinlock and getting dropkicked in the back of the head. The first kneebar sends Kendrick over to the ropes. A hurricanrana off the apron out to the floor sends both guys crashing outside….where Kendrick takes the countout at 6:30.

Perkins gives Kendrick the kneebar on the floor.

Mick Foley thinks Negan got the idea for Lucille from Cactus Jack. Braun Strowman comes up and says he wants to be part of Team Raw at Survivor Series. He’s tired of these lame handicap matches and now he wants real competition. Mick: “Is that a threat? Because if it is…..it’s working.” Foley puts Braun in a battle royal for a spot on the team. That seems to please the monster for now.

Here’s Foley to talk about last night’s show with a focus on the Universal Title match. Everything that Owens and Jericho did last night was legal but it all left a bad taste in Foley’s mouth. Jericho and Owens come out to brag about getting into the Cell last night and walking out with the title.

That win means they should be anchoring the Survivor Series team because they’re the top two guys on Raw. They laugh at Foley and bring up him losing the Cell match against HHH right here in Hartford, Connecticut. Foley gets in Owens’ face to yell about how much talent he has but Jericho keeps interfering. Jericho was standing there with a key around his finger and that’s what people are going to see on the WWE Network in eighteen years. Jericho: “Lock it in man.”

That’s enough for Foley, who says Stephanie only wanted Owens for Raw. However, Foley is going to put them both on the team along with another guy he can trust. That wouldn’t be just any guy, but rather THE guy. Reigns comes out and praises Foley’s pumpkin shirt while saying Owens and Jericho look like Spongebob and Patrick.

Roman was going to dress up like a stupid idiot but the store was out of Jericho costumes. Jericho teases putting someone on the List but NO ONE GOES ON THE LIST TONIGHT. Chris doesn’t like anyone here in the United States but he would still be a better US Champion than Reigns. That sounds good to Foley so the title match is made.

Package on Charlotte vs. Sasha Banks.

The winner is on Team Raw with Reigns, Jericho and Owens. A bunch of people go after Strowman to start but he quickly eliminates Truth and Dallas. Neville and Sheamus start double teaming but the Brogue Kick knocks Braun through the ropes instead of over them and we take a break.

Back with several names having been eliminated during the break. Sheamus gets rid of Young and Sami kicks Titus out. Cesaro throws Sheamus out but gets eliminated by Strowman. Braun throws Neville out as well and it’s down to Strowman and Sami. Some strikes have Braun in trouble but he throws Sami onto his shoulders. We get the Benoit/Big Show choke on the ropes with Braun being pulled over the ropes, only to easily power Sami up and throw him out for the final elimination at 8:20.

It’s New Day costume time….and all three are different variations of Charles Wright (Big E. as Kama, Woods as Papa Shango and Kofi as Godfather). They’re looking ahead to the future because they’re officially the captains of the Raw Survivor Series tag team. That means the power of positivity vs. the power of cheese and crackers. They’re not sure about the rest of their opponents because Shane and Bryan haven’t announced the rest of the lineup. Woods is a bit scared of American Alpha and they can’t actually come up with any insults for them. Not that it matters because New Day ROCKS.

Daivari gets his arm worked over to start before it’s quickly off to Nese vs. Alexander with Cedric being slammed face first into the barricade. A chinlock doesn’t last long and the hot tag brings in Rich to clean house. Swann’s rolling splash gets two and everyone winds up on the floor for a double dive. Rich kicks Nese in the face and a jackknife cover gets the pin at 6:31.

Here’s Charlotte for her address as champion. She calls the fans peasants and promises to lead the women’s team to victory against Team Smackdown and its captain Nikki Bella. Charlotte is ready to take on all of the Smackdown women but thinks there’s a weak link on her team and her name is Bayley.

Cue Bayley, who says she’s glad Charlotte called her out here. Seeing last night’s main event choked her up and she wants to congratulate Charlotte on her win. Unfortunately she’s also become the biggest jerk and the kind of champion Bayley never wants to be. Charlotte says this isn’t NXT anymore and she sees a glorified fan looking back at her. Therefore, tonight Bayley has a match with one of her teammates.

Charlotte is on commentary. Nia starts fast with a shoulder breaker and throws Bayley around a bit before grabbing a bearhug. Bayley reverses into the guillotine but Nia is a learning monster and drives her into the buckle for the break. Some kicks to the legs and a few dropkicks stagger Jax, only to have the standing Vader splash crush Bayley. Instead of the legdrop, Nia goes to the middle rope, only to have to fight out of a super Bayley to Belly. Bayley comes up holding her knee and a ram into the barricade makes it even worse. The knee seems to be fine as Nia hits the Samoan drop for the pin at 5:52.

Epico is part of an early uppercut train as the fans call Sheamus a shame. The cousins start taking over on Cesaro with a dropkick and sunset flip for two. That means some PUERTO RICO chants….from the cousins. The tag brings in Sheamus to throw Primo to the floor and give Epico the ten forearms to the chest. The Cloverleaf makes Epico tap at 4:06.

Jericho and Owens talk about the US Title match with Chris suggesting that Kevin be out there for some help. Owens is cool with the idea and thinks they can go get…….IT.

Reigns is defending and we get some Big Match Intros. Feeling out process to start until Jericho gets in a shot off the middle rope. They head outside with Owens throwing the weakened champ into the post as we take a break. Back with Jericho in control until he misses a charge in the corner.

Roman hits his string of clotheslines but the Superman Punch misses. The Lionsault hits knees so Jericho opts for the Walls in the middle of the ring. Roman powers out of that and grabs a sitout powerbomb for two more. Owens’ distraction doesn’t work and now the Superman Punch connects. The spear looks to finish but Owens comes in for the DQ at 14:50.

Post match the beatdown is on until Seth Rollins comes out for the save. Rollins and Reigns share a staredown so maybe they’ll get back together for Survivor Series. 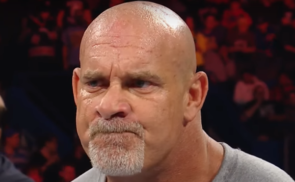 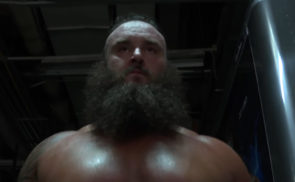