We’re just two weeks away from Hell in a Cell, but tonight was all about a match going on further down the line, and a rematch over a decade in the making. Tonight was the night of Goldberg’s return, and he answered Brock Lesnar’s challenge in emphatic terms. The Beast isn’t just “next,” he’s “last.”

Speaking of challenges accepted, Stephanie and Mick accepted SmackDown’s Survivor Series throwdown, confirming three elimination matches that will pit the best men, women, and tag teams from each brand against one another.

In more immediate matters, the competitors clashing at Hell in a Cell got another chance to get their licks in ahead of the event at month’s end, and two big matches that could have ramifications at the PPV were announced for next week’s Raw. The New Day will take on Cesaro and Sheamus ahead of their championship competition, while Seth Rollins, Chris Jericho, and Kevin Owens will do battle in a triple threat main event.

We’ve got full results below, as well as video of all the highlights. Read on.

Here are Kevin Owens and Chris Jericho for the opening chat. Owens thinks Mick Foley has a personal vendetta against him because he’s put the title match inside the Cell. Jericho’s calls for quiet backfire so he talks about all the stuff that happened inside the Cell over the years, including ending Foley’s career.

It’s still going to be the Chris and Kevin Show because Jericho should have been in that match as well. We hear Jericho’s resume again, including beating Rock and Austin on the same night. Jericho: “Bet you forgot about that one!” He only lost last week because of bad refereeing so THE REFEREE IS ON THE LIST!

This brings out Rollins to a BIG face chant. Like, even bigger than the time he beat up Roman Reigns and should have been turned face then. Rollins thinks everything about Jericho should be on the List, including the trunks which Rollins refers to as Sparkle Crotch. Jericho: “I AM NOT SPARKLE CROTCH!” For calling him that, Rollins JUST MADE THE LIST!

Seth brings up Owens bailing on Jericho two weeks in a row but that’s just to keep the team strong. Jericho issues a challenge to Rollins, who wants to fight right now. Actually hang on because Seth wants to know what Owens is going to do. Jericho and Owens disagree about whether Owens should stay or go with Jericho saying he’s got this because Owens can be here in spirit. Rollins: “Let’s do this. Owens, get your hands off Sparkle Crotch.”

First good sign of the match: the bell rings as we get back because Foley made it official during the break. Do that WAY more often. The SPARKLE CROTCH chants begin as Rollins clotheslines Jericho out of the corner and stomps on the Canadian. A backbreaker gives Jericho two and control but he has to fight out of a Pedigree attempt. Jericho backdrops him over the top and face first onto the apron as we take a break.

Back with both guys getting up and Rollins scoring with a Sling Blade for two. The nose breaking knee has Jericho in trouble but here’s Owens for a distraction. Rollins hits the springboard knee but gets distracted anyway, allowing Jericho to grab the Walls. The referee sees Owens holding the ropes away from Rollins though and the hold is broken. Instead Jericho goes with an enziguri but the Codebreaker is countered into a Pedigree for the pin at 14:36.

We look at Goldberg’s first win in WCW.

Earlier today, Lita sat down with Charlotte for a chat about what it means to go inside the Cell. Charlotte brags about how awesome she is and how this is the latest moment on her already amazing resume. She’s won eleven pay per view title matches in a row and this is going to be another one. Charlotte lists off all her accomplishments and says she’s going to win again because that’s what she does.

This is over the Shining Stars trying to rip Henry off fake Rolexes. Apparently they were Titus Brand watches so there’s your reason for this match. Titus beats on Goldust to start and it’s off to Primo for a chinlock. The powerslam allows the hot tag to Truth as everything breaks down. Henry tags himself in and the World’s Strongest Slam ends Titus at 3:09.

Jericho yells at Owens for coming down to ringside and almost calls him a Stupid Idiot. Owens calls him out on it and here’s Stephanie to cut them off. She says this is what Seth Rollins is trying to do and somehow ties it into the feud with Smackdown over the upcoming Survivor Series matches. Stephanie leaves and the guys are all quiet.

Before the match, Big E. laughs at the idea of Cesaro and Sheamus being a good team. Kofi points out that you can’t say Sheamus without the word SHAME. Woods: “I doubt these two are even friends on Facebook.” Sheamus isn’t pleased and starts fast with a German suplex. Cesaro watches on Facebook Live because WWE wants you to stop watching the show and go look at that. The apron splash gets Big E. out of trouble and Cesaro stops for more video.

Back from a break with Sheamus diving into a belly to belly but blocking the Warrior Splash. Big E. grabs a powerbomb of all things for two and Sheamus gets the same off White Noise. Cesaro takes this opportunity to go into the crowd with his phone but Sheamus takes it away and demands that he film the following Brogue Kick. Instead it’s a splash in the corner and a rollup to give Big E. the pin at 10:24.

The next Goldberg video is him winning the WCW World Title from Hollywood Hogan on July 8, 1998.

Curtis Axel is in Bo’s corner and is the biggest Bo-liever of them all. Dallas is all aggressive to start and knees away on a much smaller looking Neville. He’s clearly lost some muscle, perhaps for a cruiserweight run. Neville misses his running kick to the face but does his an Asai moonsault. Back in and Bo charges into a boot to the face but manages to leg sweep his way out of the Red Arrow’s path. A Roll of the Dice gives Bo the big upset at 2:56.

Dana runs around a bit to start but gets caught in a Stunner over the middle rope. Back in and Dana knees her in the ribs, meaning it’s time for a Ken Bone joke. A chinlock doesn’t last long and Bayley starts with her elbows, followed by a dropkick to the back. Dana sends her face first into the post and…..gets the pin at 4:10. The ending looked a bit odd, as in not the planned ending. I think Dana was supposed to put her feet on the ropes (she was swinging her leg near them) but didn’t get them up there, meaning it was closer to a clean win.

Paul Heyman joins us via satellite to say Goldberg isn’t worth Lesnar’s time because it’s a fantasy challenge. It would behoove Goldberg to just not show up tonight because otherwise Lesnar is going to hurt him very badly. The fans chant YES but Heyman says that’s just hurting Goldberg even worse.

The jobbers don’t have names but one of them thinks Strowman will have issues with the altitude. One of the guys has curly hair so Graves says he thought it was No Way Jose’s less intimidating cousin, Perhaps Not Jorge. Strowman throws two of them to the floor and LAUNCHES the third onto his partners. One of the trio tries to leave so Strowman chases him down and throws him back in. A powerslam and reverse chokeslam give Braun a double pin at 2:16.

Strowman says he’s coming to take matters into his hands right now but here’s Sami Zayn to cut him off. Strowman shoves him out to the floor and walks off.

Sami says he’ll fight Braun because no one else will.

Here are Rusev and Lana to run down America and its horrible family values. He’s heard about Roman’s family but he doesn’t want to hear about 700 Samoans sitting around a campfire dipping a turkey leg in mayonnaise. As a counter, Rusev, has a photo album of his own family.

This includes his mother (two time world rowing champion), his father (who wrestled in the military), his brother Rusev (Rusev Rusev? Either way he’s a chef.), his grandmother and their award winning dog. Reigns FINALLY comes out to interrupt and is quickly beaten down, allowing Rusev to put Reigns in the Accolade.

Clip of Goldberg debuting in WWE.

Cass erupts on Anderson in the corner and sends him flying with a fall away slam. Back in after a quick brawl with the partners and it’s the East River Crossing for the pin on Karl at 1:10.

Tony Nese and Drew Gulak agree on some kind of a deal with Brian Kendrick when TJ Perkins comes in. Perkins thinks there’s been a deal made but Kendrick says he doesn’t know how this works. TJ thinks this is WWE2K17 and he has unlimited lives but this is Kendrick’s last life. Cedric Alexander and Rich Swann come in and there’s a six man later.

Earlier today Sasha Banks sat down with Lita. Sasha knows Charlotte will be ready because they’ve fought so many times before. Charlotte needs to know that the show is in Boston though and Sasha will be on her game in her hometown. Sasha is over her back injury and might be a bit intimidated by the Cell but she’s not afraid.

Video on Goldberg winning his second World Title at Unforgiven 2003.

Gulak takes Alexander into the corner to start before it’s off to Perkins to slam Nese in the corner. A tornado DDT is countered into a suplex for two on TJ and Kendrick comes in, only to get caught in the kneebar. Back from a break with Swann coming in for a hurricanrana as everything breaks down. Nese gives Rich the 450 and the Captain’s Hook is enough for the submission at 7:15.

The Bosses recap the idea for Survivor Series and make Jericho vs. Owens vs. Rollins for next week. Stephanie LOVES the idea. Foley: “I feel like we have a connection.” Stephanie: “Like the Rock N Sock Connection?”

We see Goldberg’s comments on SportsCenter from two weeks ago.

Cole brings out “the greatest champion in WCW history”. Goldberg gets the big, long walk entrance through the back with everyone applauding him (and the Governor of Colorado being shown on camera chanting his name). Goldberg finally comes out and soaks in some cheers before saying you should never say never again. His wife and son are here to see him for the first time ever.

Back in January, he got a phone call from 2K asking him to promote their new video game. The thing he misses most, other than hurting people, is being a hero for kids. Somewhere along the way, he created some drama around here and maybe it’s better left alone. Fans: “NO!” Goldberg: “BUT THEN!” Fans: “YAY!”

Goldberg talks about Brock having Heyman challenge him to a fight, which made him think he has one more beating left in him. Maybe he has one more spear and Jackhammer in him. That means Brock is next but he’s also last. Goldberg goes around the ring and picks up some kids (including his own) to end the show. 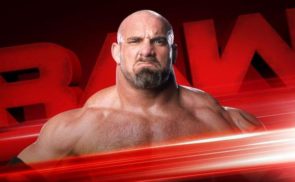 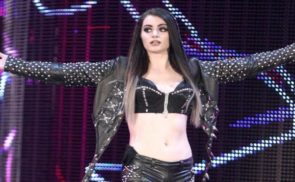