Apparently WWE Just Decided to Have Good Wrestling at WrestleMania

WWE puts on some good wrestling. In fact, they employ some of the best wrestlers in the world. AJ Styles. Shinsuke Nakamura. Cesaro. Even smark-maligned names like John Cena and Roman Reigns have had their share of in-ring classics.

But there’s no doubt WWE often favors spectacle over great in-ring performances, especially when putting together their biggest show of the year. After all, it’s a lot easier to put together highlight videos of an impressive dive off a cage than it is to tell people in five seconds what was cool about an expertly-paced in-ring battle.

But apparently, the huge success and massive buzz surrounding Wrestle Kingdom 11, with its incredible main event between Kenny Omega and Kazuchika Okada, has led WWE to rethink that strategy heading into WrestleMania.

According to Wrestling Observer’s Bryan & Vinny show, several people in WWE creative tuned into New Japan’s biggest show, and they think the in-ring excellence is something they should strive for in WrestleMania’s main event.

“A whole bunch of people in WWE creative,” said Bryan Alvarez, “all watched the Kenny Omega versus Kazuchika Okada match. And the idea today is, now, they want a great main event for WrestleMania.”

Yes, folks, all it took for WWE to decide it wanted great wrestling in WrestleMania’s main event was a historic level of in-ring quality from their biggest international competitor. Man, why don’t we get great matches every year?

The fact that this idea is floating in creative meetings doesn’t necessarily mean that it will happen. After all, the final call is always with Vince McMahon, who could easily decide that Braun Strowman versus Roman Reigns is the best possible main event. (Yipes.)

But it does mean that you shouldn’t give up hope for your Rollins versus Styles dream match just yet. Or do you have a different dream match? Let us know in the comments below, or over on Facebook! 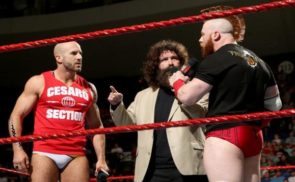