Owens is a master crowd heckler, in a way few modern WWE superstars are–or are allowed to be.

Just the other day, in fact, Owens talked such a big game that even Roman Reigns had to break character to laugh.

This latest bit of heel work may be just a hair over that line, though–at least according to WWE’s modern, family-friendly standards.

Owens got personal with an older fan in the crowd, calling him grandpa while bragging about his impending victory over Roman Reigns. Owens said the crowd would finally have a United States Champion they could be proud of.

It doesn’t matter if “grandpa” doesn’t like it, Owens said, “because you’ll be dead in about five years!”

But hey, it’s a bad guy’s job to be hated by everyone, so any way you can get booed, right? (It’s not like Owens fans will be swayed from cheering their darling, in any case.)

What do you think? Is this proper heel work from Kevin Owens, or a was it over the line? Let us know in the comments, or over on Facebook! 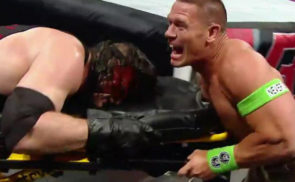 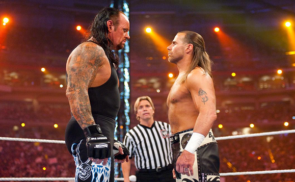