When Was The Wyatt Swamp Fight Filmed?

One of the marquee matches at this weekend’s “The Horror Show at Extreme Rules” pay-per-view is the Swamp Fight between Universal Champion Braun Strowman and Bray Wyatt. This cinematic match will not be for the title, but will feature the return of the original “Eater of Worlds” character.

But when was the match filmed?

After some delays, I’m told the Swamp Fight for Extreme Rules was filmed last night in Florida.

After some delays, I’m told the Swamp Fight for Extreme Rules was filmed last night in Florida.

Check out what happened when the two of them were in the ring together at Money in the Bank:

Wyatt ended his harrowing silence by resurrecting the dead from The Firefly Fun House and shocked the Universal Champion. After a week of soul searching, Strowman responded adamantly and promised to drag Wyatt into the Swamp to let the alligators finish the job. As Wyatt’s maniacal laugh echoed through the WWE Performance Center, Strowman knew the die had been cast for the Wyatt Swamp Fight.

The Monster Among Men bested his old family member with Black Sheep mind games at WWE Money in the Bank. Will Strowman once again dig into his inner darkness, or is Wyatt laying a devastating trap for his rival?

WWE has hit a home run on every single one of their production matches since the COVID-19 pandemic started sweeping the world. Both of these competitors are fantastic and I expect nothing less than a cinematic masterpiece this weekend!

Are you looking forward to the Swamp Fight between Braun Strowman and Bray Wyatt at “The Horror Show at Extreme Rules?” Leave us a comment below, or post a comment on our Facebook page! Also, be sure to sign up for our newsletter!

*POSSIBLE SPOILER* For This Week’s SmackDown 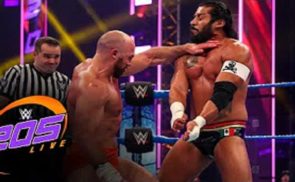