He’s back! WWE recently posted a new video to its YouTube channel, in which they show the full match between The Undertaker and Kane from Wrestlemania XX (20). It was the return of The Deadman after being Buried Alive by his brother at Survivor Series a few months prior.

After one of the best entrances of The Undertaker’s career, along with the return of Paul Bearer, The Deadman would proceed to go after a distraught Kane with everything that he had. Even though The Big Red Machine came back with a few moments of offense, the end result would be a chokeslam and Tombstone Piledriver from The Undertaker, cementing a record of 12-0 at WrestleMania.

I get goosebumps every time that I watch this entrance. Seeing Kane’s reaction, along with the return of Paul Bearer, reminds me of just how epic this was. This match and moment is certainly worth your time and I would highly encourage you to go back and check it out for yourself. There will never be another character like The Undertaker! 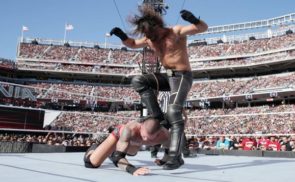