WATCH: John Cena vs. Kevin Owens From Money In The Bank 2015

The rematch the world wanted to see. WWE has posted a new video to its YouTube channel in which they show the match between John Cena and Kevin Owens from Money in the Bank 2015.

Even as Cena took control in the opening moments, the prize fighter’s hubris never wavered, commenting mid-match on Cena’s tough early attack: “How’d that work out for you last time?”

Owens backed up his trash talk further by hitting Cena’s signature combination — a pair of shoulder blocks, side slam and 5-Knuckle Shuffle. Cena wouldn’t stay down, though. He battled through Owens’ hard-hitting punches and slam with resiliency that would have made any fan of the hometown Blue Jackets smile.

When Cena hoisted Owens into position for an Attitude Adjustment, adding a “You can’t see me” taunt for good measure, it seemed academic. Then Owens powered out of the pinfall at a late two, and the Cenation leader nearly unraveled.

Cena questioned referee Mike Chioda’s two-count, showing an unusual amount of frustration for The Champ. Hoping to deliver a decisive blow, Cena perched Owens on the turnbuckle, eying a top-rope AA. It nearly cost him the bout, however, as the NXT Champion countered into a spinning sit-out powerbomb.

Neither Superstar could get a firm grip on momentum in the moments that followed. Cena rolled out of a Pop-up Powerbomb with a hurricanrana. Owens dodged a top-rope legdrop and followed with a belly-to-back side slam.

Unable to secure the win, the two Superstars dug deep into their arsenals, with Owens attempting — and missing — a moonsault and Cena hitting a sunset flip powerbomb. With every unordinary move, no one at Nationwide Arena had a clue what they were watching. They just knew it was special.

Ultimately, Cena caught Owens off-guard and won with an Attitude Adjustment, though he had to show his respect to the NXT Champion for his valiant performance.

When Owens picked up the victory two weeks prior at Elimination Chamber, I thought he would be slated to win the Royal Rumble in 2016. I was wrong, but it was still an awesome way for KO to be brought up to the main roster. And things have worked out pretty well for him ever since. 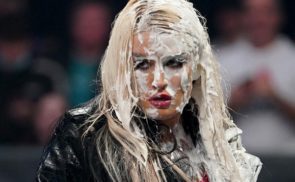 They Had An Idea: Toni Storm Reveals Original Plans For Her Time In WWE